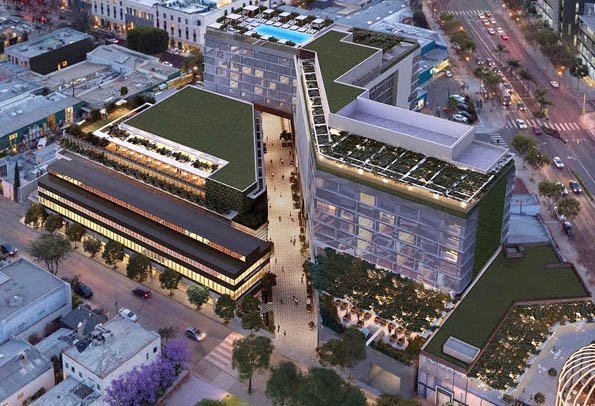 Sources said the deal hit the market on Tuesday.

When completed, the 1.92-acre project— located at 652 North La Peer Drive, at the edge of Beverly Hills—will include a 5-star, 182-room hotel, a private members’ club with 19 guest rooms and high-end retail, restaurant, office and banquet space. The development will also feature a three-level subterranean parking garage with space for 750 vehicles.

Comprising six land parcels that were acquired by WeHo-based Faring in 2014 and 2018, the project involves the construction of the aforementioned structures around The Factory, a historic building that once housed the legendary Studio One gay nightclub. The Factory is now being restored and incorporated into the much-anticipated development.

Aiming to both preserve the history of WeHo and enhance the pedestrian nature of the area, the project will also connect Robertson Boulevard and La Peer Drive via a 35-foot wide pedestrian paseo. The project is endorsed by the Los Angeles Conservancy, The National Historic Trust and West Hollywood Preservation Alliance.

Faring, led by Jason Illoulian, currently has 16 active projects in WeHo, including The Birdcage, a recently-announced 55-foot tall development that will sit on the site adjacent to Robertson Lane and is shaped like—you guessed it—a birdcage. When completed, the project will include restaurants, retail and a subterranean speakeasy, according to WEHOville.

Officials at Faring didn’t respond to a request for comment.