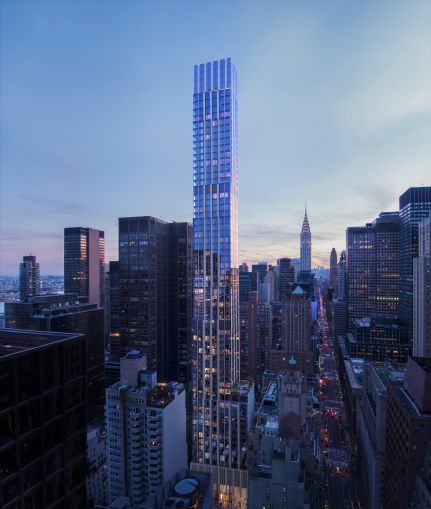 A rendering of The Centrale at 138 East 50th Street. Courtesy: Ceruzzi Properties

Ceruzzi Properties wrapped up construction on the 63-story asset at 138 East 50th Street late last year and its final temporary certificate of occupancy was issued about a month ago, according to Ceruzzi President Art Hooper. Meritz’s condo inventory loan marks the first entrant from that region in the space, sources with knowledge of the deal told CO.

The financing retired $300 million in previous construction debt from Madison Realty Capital (MRC) that was provided in 2017 to Ceruzzi and its equity partner SMI USA, the U.S. division of Shanghai Municipal Investment, as CO previously reported; MRC’s loan took out a $65 million land loan Ceruzzi had secured from the Industrial and Commercial Bank of China in 2015. The MRC loan came after Ceruzzi and SMI USA had spearheaded the funding for the construction of the first 40 stories of the project.

Meritz could not be reached.

“[Meritz] was very cautious in terms of their approach, just incredible due diligence,” Hooper told CO. “We were answering questions right and left. This inventory loan was a first for them. They dug deeply into the market and were methodical and very deliberate in how they approached things. They really wanted to know us and our track record, and we had to satisfy them on multiple levels.”

Hooper said that Ceruzzi was considering a second foreign capital source and also a domestic lender before ultimately going with Meritz, adding that “in terms of pricing and some of the ancillary terms and loan dollars, they were superior.”

Designed by César Pelli’s Pelli Clarke Pelli Architects, the 254,000-square-foot skyscraper soars over Midtown East — between Lexington and Third Avenues — at 802 feet. It features 124 condo residences and includes nearly 8,600 square feet of retail space on the lower level and ground floor, according to data from CoStar and information from sources. Sales launched in April last year. Currently, there are 22 residences for sale, ranging from $1.5 million to $12.5 million, according to information from CityRealty.

According to December analysis from Nancy Packes Data Services, cited by The New York Times in a January report, almost half of fresh condo units in Manhattan that hit the market after 2015 — 3,695 of 7,727 residences — remain unsold.

Ceruzzi President Art Hooper said they have 22 units in contract right now and several more are currently in negotiation. He said that while they launched sales last April, it really didn’t pick up steam until a sales office was opened inside the building in the third quarter. Douglas Elliman is currently handling sales.

“[Meritz was] satisfied that in the next 24 to 36 months, these [units] could sell at a reasonable price to get them repaid,” Hooper said.

Ceruzzi acquired the development site from Extell Development for $86.2 million in 2013, records show. The firm had also bought additional air rights at the location, which pushed the deal’s value north of $100 million, according to a 2017 report from The Real Deal.

The development has 100 feet of frontage on East 50th Street and includes an entrance on East 49th Street for a small parking area, which includes 24 parking spaces, a source said.