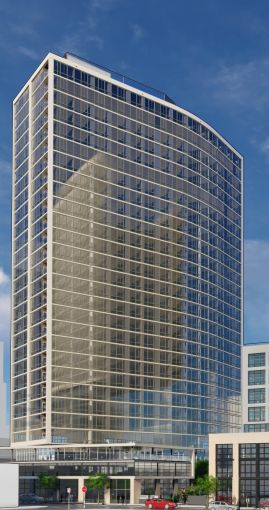 RXR Realty has landed a $131.2 million construction loan for its mixed-use development at 26 South Division Street in New Rochelle, N.Y., Commercial Observer has learned. Capital One is the lead bank on the financing, providing a 42-month interest-only floating rate loan with two extension options. The deal closed on Valentine’s Day.

The 28-story tower at 26 South Division Street is RXR’s second building within the master redevelopment plan for New Rochelle, part of a public-private partnership with the City of New Rochelle. The plan encompasses more than 12 million square feet of new development in the downtown area, of which RXR has roughly 2.3 million square feet of development rights. The Downtown Rezoning Plan aims to reinvigorate the downtown area and will include a mix of residential, office, residential, retail and hospitality development.

The first building completed under the plan was 360 Huguenot, a luxury apartment rental building that opened last summer. When 26 South Division Street is completed, it will comprise 352 market-rate apartments, 12,000 square feet of retail, a valet parking garage, a lounge, coworking space and a speakeasy.

It isn’t the lender and developer’s first project together; in December 2016, Capital One also served as the lead bank on the  $118.3 million construction loan for Larkin Plaza, RXR’s transit-oriented mixed-use apartment complex in Yonkers, N.Y. The 26 South Division Street development shares similarities with Larkin Plaza and therefore a lot of its appeal, Prithvi Mohan, a vice president at Capital One, said.

“At a time when prospective renters face difficult trade-offs between quality housing and ease of commute, New Rochelle is a natural extension of the transit-oriented story that has developed in places like Long Island City, portions of Brooklyn, and Jersey City,” Mohan said. “We are excited to be part of the broader redevelopment of New Rochelle and proud to be working with RXR, given their expertise and commitment to this market.”

Mohan said that Capital One was not only attracted to the top-tier sponsorship, but also to the opportunity within the location. “New Rochelle is 35 minutes from Manhattan and has unmet demand. It appeals to Westchester residents who are downsizing and want to be close to the city as well as their roots,” he said.

Speaking more broadly of the bank’s approach to construction lending in these competitive times, Mohan said: “We see construction lending as a finite resource we want to deploy to our best clients for the best opportunities. We don’t have a defined target for growth; we take a conservative stance and service the very best names.”

RXR’s third New Rochelle development—located just across the street from 26 South Division—will be 28 South Division Street, a 28-story, mixed-use tower which will feature 390 market-rate apartments and more than 7,000 square feet of retail.

Officials at RXR weren’t available for comment before press time.