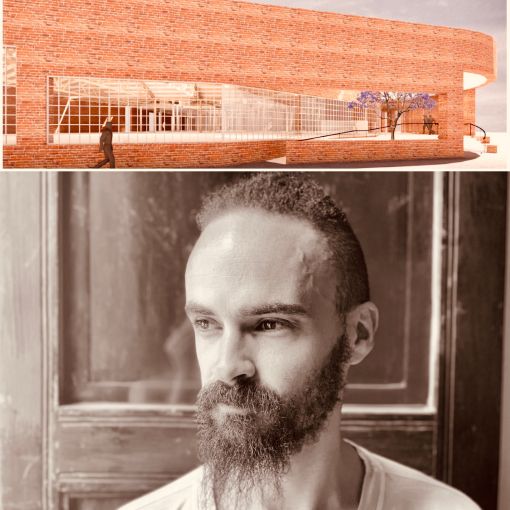 A rendering of the Exposition 2 project at the intersection of Crenshaw and Exposition Boulevard with Asher Luzzatto. photo: Luzzatto Company

The West Adams neighborhood along the sprawling 10 Freeway is one of the oldest in Los Angeles, but it has found renewed investment, development and vitality since the opening of new major public transit stops along the Metro’s Expo Line. The move connected the area to much more of the city, as well as to new developer and investor incentives.

The Luzzatto Company has been one of the leading firms in front of the neighborhood’s transformation, with office conversion projects that drew pre-lease agreements from growing new firms like GOAT, an L.A.-based online sneaker startup, at its 56,000-square-foot Exposition 2 development, located at the intersection of Crenshaw and Exposition Boulevards. Fast-casual darling Sweetgreen will be moving its headquarters next door to Exposition 3, another creative office campus that Luzzatto converted from a former industrial building.

Asher Luzzatto, president of the L.A.-based firm, has been leading the charge, managing everything from the firm’s acquisitions and development to its leasing and financing.

After obtaining degrees from UCLA and the University of Chicago Law School, his career included time as an attorney for L.A.-based law firm Pircher, Nichols & Meeks. He also founded a wellness center called Hyperslow on Fairfax Avenue, which includes a yoga studio, a cafe and coworking space. He joined the investment firm, which is headed by his father and chairman Marc Luzzatto — who also serves as chairman of Nylon Media, in early 2017.

In West Adams, Luzzatto is also working on the “Expo Station” office project and another conversion at 3330 Exposition Place. The firm has also been active in Sawtelle, Leimert Park and other South L.A. areas.

Asher Luzzatto filled Commercial Observer in on how the firm got ahead of West Adams’ emergence as an affordable alternative to nearby office hubs, and the value created by new conversion projects.

Commercial Observer: You’ve said that Luzzatto Company was the first firm to take advantage of the current boom in West Adams. Can you talk about how that came to be, and what opportunities you saw that made you invest in the neighborhood?

Asher Luzzatto: We were certainly not the first firm in West Adams, but we were the first to execute a major creative office lease in the area. West Adams and Leimert Park are two of the oldest and most beautiful neighborhoods in L.A. They have tree-lined streets, great architecture and rich cultural histories. The communities that have grown around these neighborhoods are strong. With the two major light rail lines intersecting at Crenshaw and Exposition, we saw an opportunity to build major commercial centers to help anchor the public transit. We also saw an opportunity to revive rundown (but well-built) properties into beautiful creative office campuses.

You’ve compared the area around the Crenshaw/Exposition transit lines to Bergamot Station in Santa Monica about 20 years ago. What similarities do you see?

The most obvious similarities lie in the architectural nature of the buildings: masonry, bow-truss industrial buildings with great light and clear height. Beyond the architecture, however, the character of the neighborhood is similar: low-rise, green residential neighborhoods surrounding industrial centers, which are slowly transitioning to office centers. Creative companies are moving into this area in much the same way they moved into the Bergamot Station area 20 years ago. That trend will continue, especially as Westside rent growth forces smaller companies to find new homes.

Was the Metro Expo Line expansion the catalyst for your firm, and the rest of the new interest, in West Adams? How significant was the introduction of opportunity zones to your interest in the neighborhood, and the increasing interest as a market in general?

The public transit was the primary catalyst for our interest, as was our belief that the center of L.A. is moving southeast. The growth of Inglewood, the revival of Downtown, the expansion of USC, and the boom in Culver City have all worked to increase population and density south of the 10 Freeway. That trend will continue, and likely at an increasing rate. The opportunity zone benefits were also very appealing to us, although we do not invest in real estate or make development decisions based on tax benefits. The opportunity zone benefits did however influence the structure of our investments insofar as they certainly incentivized us to hold for the long term.

What are the biggest ways you’ve seen the West Adams market change since you first started working on projects there?

The biggest change I’ve seen is in the owner-user market developing in West Adams and the surrounding areas. This is a really positive development because owner-users help sustain not only commerce in an area, but culture, too. These kinds of owners plant flags for the long-term. They are not “flippers.” In time, stability breeds interconnectivity, which in turn, breeds further stability. Such stability eventually breeds a diverse ecosystem which is resilient and somewhat insulated from major fluctuations in an otherwise emotional market. This philosophy is the same one guiding much of the anti-gentrification dialogue happening right now. I won’t go into that here, but it’s a critical dialogue that can’t be ignored.

Have you seen growing rents and land prices since then? Is it still accurate to say office lease rates in West Adams are about 30 to 40 percent cheaper compared to neighboring cities like Culver City and Century City?

Yes, though rents and land prices are growing all around the city. And yes, West Adams is, very generally, about 30-40 percent cheaper than the hubs of Culver City and Century City.

Properties are trading at more than $500 per square foot. How does that compare to when you first entered the market?

What does it say that West Adams is attracting tenants like GOAT and Sweetgreen?

It says that some of the most successful, creative and fastest growing tenants value transit and space. But it’s important to note that West Adams in and of itself would not have been enough to attract these tenants. These tenants wanted the specific properties and buildings that we were developing. There is an art to creative office development that cannot be defined by any single area in the city or even any single kind of building. More than anything, these companies want great physical space for their employees because these companies value their employees. Employee retention in high-growth companies is critical to the success of those companies. Old school office buildings just won’t cut it.

What can we expect from West Adams in 2020? Do you expect continued interest from more developers and increasing land prices? Can we expect anything new from Luzzatto in West Adams this year?

We can expect significant growth in the amenities serving this market as restaurants, cafes and boutique retail operators continue to move in. We will bring two more creative office properties online in 2020, with others to follow.

What other markets has Luzzatto been active in and why?

We have always been active in Santa Monica as the barriers to entry are the greatest of any place in L.A. County and the demand has never really stagnated. Beyond Santa Monica, however, we have been pretty well-balanced in our investments throughout the rest of the city and area.

What new or other market are you most interested in? Do you expect your firm to make major plays in other markets in L.A. this year?

We are always interested in new submarkets and opportunities, but beyond West Adams and Leimert Park, we will be focused on specific properties rather than general areas, as we refine and redefine the kind of space we deliver to our tenants.