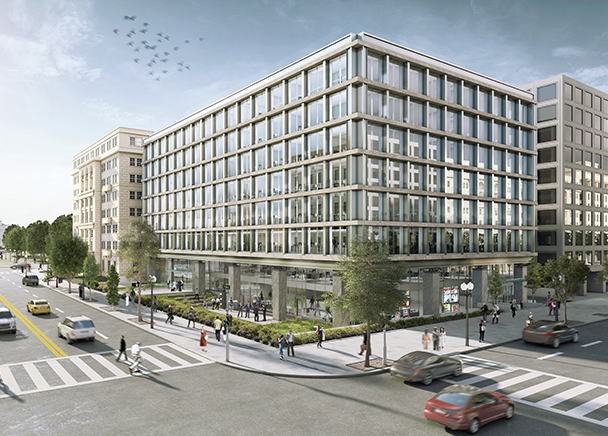 In 2017, TCC and Meadow Partners acquired an 80 percent condominium interest in what was then known as the Motion Picture Association of America Building, and has since transformed the nearly 50-year-old property into a 150,000-square-foot trophy office building.

“Given the building’s location and prominence, it was clear that transforming 888 16th Street into a modern trophy office building was the right strategy,” Campbell Smith, TCC’s managing director and business unit leader for the Mid-Atlantic office, told Commercial Observer. “These deals signed by McGuireWoods and Hausfeld reinforce our decision to take on this project and are prime examples of the demand that exists in this market for highly efficient, trophy office space.”

The renovations included updating the facade, building a common space in the penthouse, adding meeting rooms, a bar and a terrace.

McGuireWoods, which signed a 50,555-square-foot lease, will relocate from 2001 K Street NW by March 2021 and take the entire sixth and seventh floors, plus part of the fifth floor. The law first was represented by Savills’ Tom Fulcher, David Lipson and Adam Brecher in the lease.

Hausfeld, which inked a deal for 31,188 square feet, will transfer from 1700 K Street NW in November to take part of the building’s third floor and all of the fourth floor. Newmark Knight Frank’s Patrick Nalls, Aaron Katz and Mike Shuler represented Hausfeld in the lease.

The Motion Picture Association, who housed its offices in the building and continues to own a 20 percent stake in the property, will move back into its 30,000-square-foot headquarters in late 2020.