In the wake of Fairway's bankruptcy, there’s been one looming figure making a mess out of grocery stores: private equity. 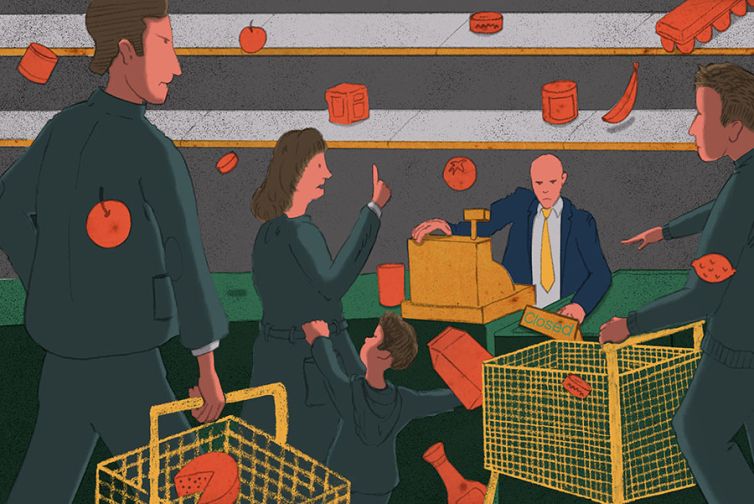 Competition from Whole Foods and Trader Joe's has made it tough for other grocery stores to survive, but a common theme in recent bankruptcies has been the chain's private equity ownership. Illustration: Saman Sarheng

The store — long a staple on the Upper West Side — agreed to sell five of its Manhattan locations to ShopRite-owner Village Super Market for $70 million along with a distribution center in the Bronx and will put its other nine markets in the tri-state area up for sale. Village Super Market plans to continue to operate the stores as Fairway but the fate of the other outposts remains up in the air. Fairway did not respond to a request for comment.

In its bankruptcy filing, Fairway listed more than $227 million in debt and said that its cash on hand dwindled to less than $1 million. While many blamed Fairway’s struggles on competition from Whole Food and Trader Joe’s, others said the real culprit was its ownership: a private equity firm.

Fairway isn’t the only casualty. Several grocery chains around the county have filed for bankruptcy in recent years due to private equity firms focused on short-term ownership who overloaded them with debt and targeted an aggressive — and unsustainable — growth strategy, said Eileen Appelbaum, who has studied and written about private equity.

“[Private equity’s] idea is we should grow as big as we can and then we’ll be really desirable, or we’ll be big enough to list on the stock market, or we’ll be so big, we’ll be desirable to some other big grocery chain,” Appelbaum, the co-director of think tank the Center for Economic and Policy Research, said. “That’s the way they always hope it will work, but it’s not necessarily the case.”

From 2015 to 2018, seven large grocery chains owned by private equity firms filed for bankruptcy, including A&P, Haggen Food & Pharmacy, Southeastern Grocers and Fairway, the latter which filed its first Chapter 11 in 2016, according to an article in the magazine The American Prospect that Appelbaum wrote with Rosemary Blatt. During that same time period, Applebaum and Blatt could not find a single publicly traded grocery chain that did the same.

In the general retail market, 10 out of the 14 largest bankruptcies since 2012 were from chains owned by private equity firms, according to a 2019 study done by several progressive groups including the Center for Popular Democracy. Those private-equity driven bankruptcies caused more than 1.3 Americans to lose their jobs in the past decade, the study found.

Grocery stores have traditionally been a low-margin business with owners sticking it out for the long haul and only focused on one or two percent returns, said John Catsimatidis, the CEO of the Manhattan chain Gristedes.

Traditional owners take steps to ensure they can survive economic downturns or changes in consumer behaviors by owning their own real estate and carrying a low debt-load, Appelbaum said. Those factors — along with the fact that grocery stores are a high-cash flow business — made them perfect targets for private equity firms.

Private equity firms were able to put a lot of debt on them, sell off the real estate at a higher value to pay off that debt and then pocket the rest, all while taking constant dividends from the money the stores brought in.

“You can actually stick your hand in the till and take your money out for these things,” Appelbaum said. “That has made both retail and supermarkets desirable assets for private equity firms.”

Private equity’s model relies on picking up struggling companies or ones that have growth potential, accelerating the growth then selling them off or taking them public. Oftentimes that means quickly opening up lots of new outposts, which doesn’t work for the slow-and-steady pace grocery owners need to survive.

“The hedge funds were interested in ‘Oh, let’s build 10 more stores, let’s push the price of the stock up,’ without regard to how much rent they were paying or if that store was going to make money,” said Catsimatidis, who was once in talks to buy Fairway himself.

The grocer Haggen was founded in 1933 in Bellingham, Wash., by the Haggen family and eventually grew to 30 stores in Oregon and Washington, the Bellingham Herald reported. In 2011, Florida-based private equity firm Comvest Partners bought an 80 percent stake in the chain and, at first, shrunk its presence to just 18 outposts. But that small footprint didn’t last long, with Comvest attempting to break into the West Coast market by buying 146 grocery stores from the Albertsons chain — also owned by a private-equity firm — in 2014 for an estimated $1.4 billion, the Los Angeles Times reported.

Shoppers complained about Haggen’s selection and high prices and less than a year later the chain filed for bankruptcy with its debt load including a $154 million loan, the Wall Street Journal reported. Albertsons eventually bought back 29 Haggen stores in Washington and Oregon, and today only 15 remain open under the Haggen name.

Fairway was started in 1953 by Nathan Glickberg as a fruit and vegetable stand on the Upper West Side and expansion moved at a glacial pace. It opened up its second store in Harlem in 1995, then one in Long Island in 2001 and a Red Hook, Brooklyn outpost in 2006, as Commercial Observer previously reported.

That strategy completely changed in 2007 when the Glickberg family sold an 80 percent ownership stake to Westport, Conn.-base private equity firm Sterling Investment Partners. Sterling opened at least one, and sometimes as many as three, new Fairways a year between 2009 and 2014. The growth was assisted by debt, with Sterling securing a $275 million term loan in 2013.

“Since Sterling Investment Partners’ acquisition of Fairway in 2007, we have made significant investments in infrastructure required to accelerate our future growth,” the company wrote In its filing for an initial public offering in 2013, when it operated 12 stores in the Greater New York area.

In the filing, Sterling said it had expected to open three to four new Fairways per year in its existing market. “Over time, we also plan to expand Fairway’s presence into new, high-density metropolitan markets,” the filing said. Along those lines, the firm said it had its sights on 300 additional stores across the U.S., including up to 90 stores across the Northeast.

Fairway went public in 2013 with its stock rising 33 percent on its first day. At the company’s peak, its stock reached $28 a share and its market cap hit nearly $853 million.

“That was a fraud,” Catsimitdis said about its valuation and stock price. “They took all that money from the public and they pissed it away.”

Sterling did not respond to a request for comment.

Fairway’s stock price quickly plummeted to just $3.76 in 2014, it had a $250 million debt load by October 2015 and the company never reported one profitable quarter since its IPO, the New York Times reported. In 2016, Fairway made its first visit to bankruptcy court and a few months later was picked up by GSO Capital Partners, a unit of private equity firm Blackstone Group, with lender Goldman Sachs Group picking up an equity stake in the process.

Part of the issues with Fairway and Haggen was that private equity’s model of stripping assets and filling them with debt no longer worked because the changing retail climate meant owners needed to put money to modernize existing stores to stay alive, Appelbaum said.

“The owners of retail chains now have to make investments in the kinds of new things that customers expect: same-day delivery, e-commerce and a range of technology,” she said. “You now have to put money into these companies when you’re used to taking money out of these companies. You’re in a new headspace with private equity and they have really not responded as well as they should.”

GSO later sold its stake in Fairway to Brigade Capital Management in 2018. Its recent filing made clear that bankruptcy was the only way for Fairway to not immediately close its doors and let its investors get back some money, said Jon Pasternak, a bankruptcy attorney at Davidoff Hutcher & Citron.

“This is their best shot of not just closing their doors and walking away from leases and recovering some money,” Pasternak said. “This was just the best way to maximize their return.”

A single bankruptcy usually won’t tank a private equity firm and owners have usually made a return on its investment by that point.

“The real losers are the workers [and] the community that [the grocery stores] serve,” she said. “You see the pain in New York around Fairway.”

Catsimatidis said he expects more grocery chains to file for bankruptcy in the future and politicians have started to craft legislation to reform the private equity model.

Appelbaum — who consulted some of Warren’s staff who wrote the legislation — said the biggest help would be the changes to leveraged buyouts, where private equity firms acquire a company with a large amount of debt it later tacks on to fund acquisitions and expansions.

Normally, private equity firms are not responsible to repay the debts if the company files for bankruptcy, only the company itself, but the new bill will make them jointly liable on the debts.

“You’ll be way more careful about putting a lot of debt on a company that you think will not be able to sustain it,” Applebaum said.