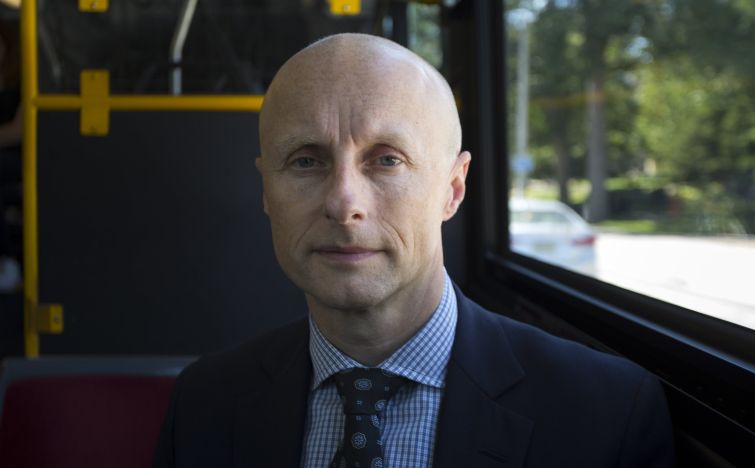 Byford, a veteran of the London Underground who ran the Toronto transit system for six years before coming to the Big Apple, was tapped by Gov. Andrew Cuomo in late 2017 to help turn around a subway and bus system beset by mismanagement, delays and deferred maintenance.

Since he arrived in January 2018, he has pushed through efforts to fund much-needed repairs to the city subway system, install new signalling and speed up trains that had been slowed by timers throughout the system. He also teamed up with the city’s Department of Transportation to create a busway along 14th Street, which means that only trucks and buses can travel the cross-town street from 6 a.m. to 10 p.m. His departure was first reported by Politico New York.

“I’m very proud of what we have achieved as a team over the past two years and I believe New York City Transit is well-placed to continue its forward progress now that the MTA has a record-breaking $51.5 billion Capital Program in place,” Byford said in a statement from the agency.

After locking horns with the governor over issues like the L train tunnel repair plan, Byford tried to resign last October, but MTA leadership ultimately convinced him to stay on, as Politico previously reported. The outlet noted that he was “tired of having to help organize gubernatorial-driven conferences about signaling and technology, which distract him from his job of improving subway and bus service, and he’s disinclined to preside over possible service cuts or layoffs.”

MTA Chairman and CEO Pat Foye said in a statement that Byford “was instrumental in moving the system forward, enacting the successful Subway Action Plan and securing record capital funding with the Governor and the Legislature, and we wish him well in his next chapter.”

Mayor Bill de Blasio lamented Byford’s departure in a tweet this afternoon. “This is a real loss for New York City’s subway and bus riders,” the mayor noted. “The MTA needs people like Andy Byford — now more than ever.”

Transit advocates are concerned about Byford’s resignation but point out that the governor is still responsible for the MTA.

“In two years, Andy made subways faster and more reliable, he tackled longstanding challenges to improving bus service, and he crafted the first plan in a generation that would truly modernize the transit system,” Riders Alliance Executive Director John Raskin said in a statement. “No matter who runs the transit system day-to-day, ultimately Governor Cuomo is in charge of the MTA, and riders will be holding the governor accountable for the quality of our transit service. With whatever management team he puts in place, the governor is on the hook for making subways faster and more reliable, rescuing buses from years of decline, and delivering on a $51 billion capital program to fix public transit for the long term.”

TransitCenter, another nonprofit transportation advocacy group, tweeted that “losing Byford should prompt some serious soul-searching by Governor Cuomo about how he’s going to attract and retain talent at the MTA. Without leadership from the governor that *clears a path for effective MTA execs like Byford* the prospects for these reforms are murky at best.”