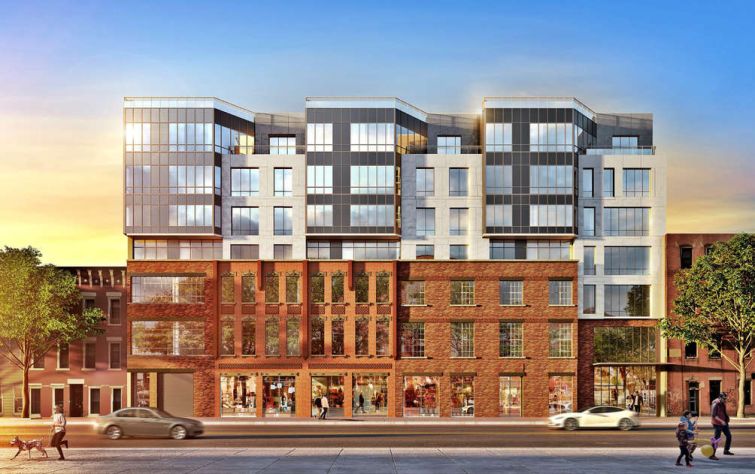 A rendering of The Umbrella Factory. Image: SL Development

The financing retired around $53.5 million in financing provided by Madison Realty Capital in the summer 2017 to cover the $23 million purchase of the site at 722 Metropolitan Avenue and to fund construction, city records show.

“Williamsburg’s condo market is one of the best performing and fastest growing in New York City, given its superior transportation accessibility and neighborhood amenities,” Peck said in a statement. “Condominiums in the area continue to thrive, outperforming the overall Brooklyn market by a wide margin.”

The property is located between Manhattan Avenue and Graham Avenue — just steps from the Graham Avenue L train station — in Williamsburg, and the site had once served as the home of an umbrella factory, starting in 1933, hence the origin of the project’s name. At the time of SL Development’s $23 million purchase of the site in May 2017, it was reported that the firm was planning to erect four stories on top of the existing three-story brick facility.

The seven-story, 65,288-square-foot development — which sources told CO will be completed in August 2020 — will sport 69 condominium units and just under 4,000 square feet of ground-level retail space.

The residences will have exposed pillars and beams of domestically sourced “heavy timber,” and the elevator building will feature amenities such as basement storage, a bike room, a fitness center, a laundry room, a 17-car parking garage, a roof deck and terraces and balconies.

Officials at LibreMax Capital — founded after the crisis in 2010 by investor Greg Lippmann, who was famously portrayed by actor Ryan Gosling in the 2015 film “The Big Short” — could not immediately be reached.