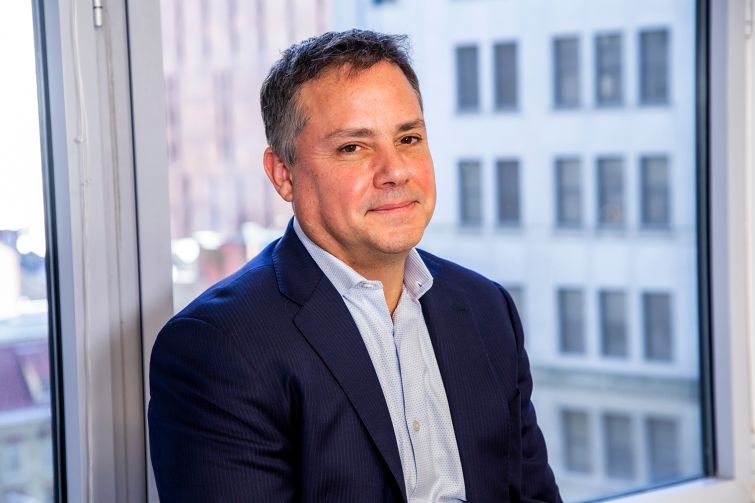 David Unger first discovered the power of the internet in 1994, when he hosted an online AOL chat with Keith Richards of the Rolling Stones. Thousands of fans logged onto AOL using their dial-up modems and typed their questions in a chatroom, as Unger helped relay the questions to the rock star and another staffer transcribed his answers in the chat.

Within a year, Unger had started his first internet company. Working in the AOL program at ABC News, he realized that most companies needed help building out their own internet infrastructure. He founded a firm called Media Stream, which built company intranets for New York City corporations like Cushman & Wakefield. He then sold Media Stream to Computer Horizons Corp. in 1999, and then did a stint as the IT firm’s CTO from 2003 to 2005.

These days, the 50-year-old runs a company called Sentient Buildings. His mission is to marry the “internet of things” — WiFi-enabled temperature sensors, thermostats, actuators on radiators — with building management systems. He founded the firm in 2014 after an eight-year stint at U.S. Energy Group, a Long Island-based company that produces boiler control systems for large commercial and residential buildings. U.S. Energy helped service and manage old-school boiler plants for multi-building residential complexes, which are typically remotely controlled by a management company. After he helped bring the company and its tech into the 21st century, he realized he had a bigger vision for how landlords could use internet-connected devices to save energy, particularly when it comes to operating old heating systems.

When he approaches an energy retrofitting project, he adds sensors to radiators, steam heating pipes, baseboard heaters, PTACs and even lights, and then syncs all of those devices to a secure wireless virtual private network for that building. All the data from the sensors and thermostats gets beamed to a cloud-based software platform called Neuro, which allows building managers to monitor energy usage and mechanical systems across their properties.

Unger also developed a system to monitor and control thermostatic radiator valves, which can shut radiators off when they reach a certain temperature, so tenants no longer have to suffer in overheated apartments. The valve communicates with a wireless thermostat, which sends the shut-off signal back to the valve when the ambient temperature in a room reaches a certain level.

He came up with the idea for the valve when he was working at U.S. Energy and noticed the obvious issues with centrally controlled boiler plants.

“The truth of the matter is, the building gets heated to the coldest tenant because it’s the coldest complaining tenant that’s going to drive the super to make changes. Then you raise the heat and you’re going to overheat everyone else, but that tenant is comfortable.”

Unger has worked on large commercial and residential buildings owned by Tishman Speyer, Related Companies and LeFrak, as well as a multi-building residential portfolio in Harlem that was recently acquired by L+M Development Partners.

“We’re doing a building automation system upgrade over at Rockefeller Center which is a large endeavor,” explained Gregg Fischer, the director of energy systems at Tishman Speyer. “The automation controls all the air conditioning systems in Rockefeller Center and ensures that all of our tenants and people who visit indoors at Rockefeller Center are comfortable. The intelligence and algorithms that are built into the system he’s designed are going to be giving us recommendations on how to save energy.”

Fischer added that Tishman gets incentives from the city and the state for energy upgrades, which significantly offset the cost of the project.

A big part of Unger’s business these days involves preparing large commercial owners like Tishman Speyer for new energy efficiency standards set by the city’s Climate Mobilization Act, which will require owners to significantly reduce their carbon emissions by 2050. While he’s not sure how some owners will meet the strict 2030 emissions caps, he noted that the overall goal is to move older buildings away from oil and gas-powered heating and towards electric heating systems and heat pumps.

“How do you get to electrically heated buildings, which is going to be a huge challenge in the next 10 years, because that’s going to be necessitated in some of these buildings,” Unger noted. “Heat pumps and VRF systems, instead of using gas or oil. And then how do you control those systems, right? That’s a big part of what we do.”

Simple products like the WiFi-enabled radiator valve can also make a big dent in carbon emissions over time. Unger developed the valve with Marc Zuluaga, the CEO of energy consultancy Steven Winter Associates, which is also a part-owner in Sentient Buildings.

“I think David is great to work with,” said Zuluaga. “He has a handle on the mechanical nuts and bolts as well as the IT and networking. He brings those two worlds together and he’s a nice guy to boot. Part of the reason he’s great to work with is his vision is so compelling. It’s an open world, just [like] with consumer products, the only way progress has been made is with standards to communicate between devices. It hasn’t happened yet with building systems but he’s basically building a platform that facilitates lots of different technologies to talk to each other.”

Of course, building management systems and boilers are not his entire life. Outside of work, he lives with his two sons, 15 and 16, and his wife in Hastings-on-Hudson, N.Y., not far from where he grew up in Yonkers. His older son, Zachary, has played a number of roles on Broadway, and now stars as Paul Giamatti’s son on the TV show “Billions.” He tries to go back to New Orleans — where he earned his undergraduate degree from Tulane University — every year for JazzFest. (In fact, a few hours after his interview with CO, Unger was on a plane to NOLA for his Tulane class reunion.)

From 2007 to 2010 he ran an internet radio station in his basement called Radio Johnson. Much like Pandora, listeners could upvote or downvote songs, and tracks would increase or decrease in rotation. He brought on well-known New York City DJs to host different segments, and he’d live stream concerts and musical events. His music genres were eclectic — ambient music, house, electronic, dance, jazz, funk. He had hoped to turn it into a commercial venture, but when Spotify came along in the early 2010s, it dominated the streaming music industry, and he realized his internet radio dreams weren’t meant to be.

He’ll just have to settle for reducing New York’s carbon footprint instead.