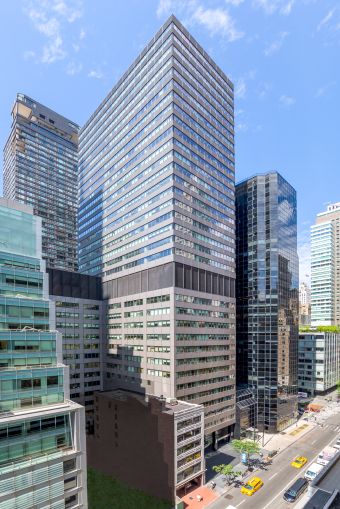 “We scoured the market looking at different options for a possible new location for Cantor’s global headquarters and saw many interesting spaces that could fit their needs,” said Jared Horowitz, vice chairman at NKF, in prepared remarks. “However, the firm has had such long-standing relationships with the current buildings’ owners and has enjoyed working with them through the years, therefore it made sense to remain in the Plaza District.”

The investment bank has been at the 37-story 110 East 59th, where it occupies the second through seventh and 15th floors, since 2005, according to Newmark. Cantor runs operations for its Cantor Commercial Real Estate lending arm, led by executive Paul Vanderslice, out of the location, as well.

“A few years ago, we made a conscious effort to put smart capital back into the building,” said Brett Greenberg, Executive Managing Director at Jack Resnick & Sons, in prepared remarks. “This vote of confidence from our anchor tenant is a validation of those efforts.”

At 499 Park, a 28-story, 303,000-square-foot tower that Cantor also moved into in 2005, the firm’s fellow tenants include Lippincott and Halstead, according to CoStar. The building will see the exit of investment bank Ducera Partners, which plans to depart for 11 Times Square this summer.

“We are very excited to continue our collaborative relationship with Cantor as a tenant,” said Stanley Iezman, Chairman and CEO of American Realty Advisors, in prepared remarks.

Cantor landed in Midtown after the 9/11 terrorist attacks destroyed its former home in One World Trade Center, and took the lives of more than 650 Cantor employees. ”This is a milestone in that we’ve completed the rebuilding process,” Howard W. Lutnick, Cantor’s CEO, told the New York Times at the time of the lease signing.

Cantor’s focus ranges from fixed income and equity capital markets to investment banking and prime brokerage, as well as commercial real estate, according to its website. It’s one of 24 primary deals that are authorized to transact with the New York Federal Reserve.

Jack Resnick & Sons was repped in-house by Greenberg and Fran Delgorio, while CBRE’s Paul Amrich represented the landlord at 499 Park.

“Cantor Fitzgerald’s long-term commitment to retain its executive offices at 499 Park Avenue is a testament to the trophy status of the property, the ownership and the location,” Amrich told Commercial Observer.

UPDATE: This story has been updated since publication to include a comment from Paul Amrich.