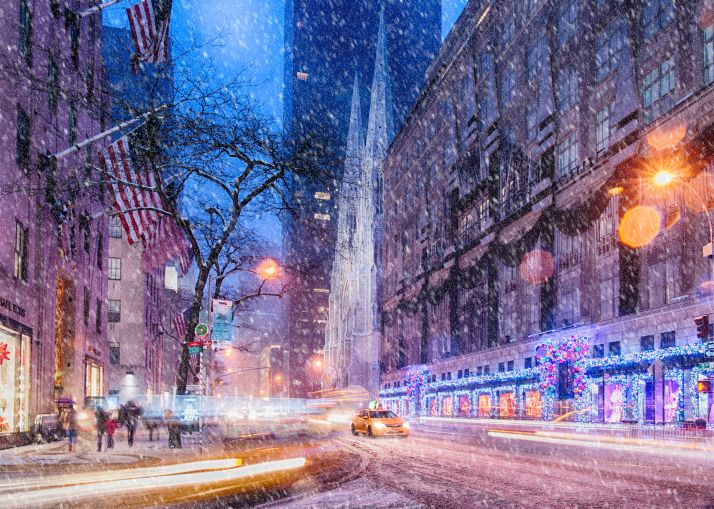 In their new 2019 Retail Holiday Trends Report, CBRE, the world’s largest commercial real estate services and investment firm, notes that retail sales across all channels are expected to grow approximately 4 percent to $729 billion in 2019, according to the National Retail Federation.

But while the overall state of retail is healthy, it’s also in transition. Pop-up stores, which are temporary by nature, are proliferating across the country and throughout New York City.

Holiday pop-up stores are especially prevalent, but the trend is becoming more common year-round, with many leading to permanent brick-and-mortar retail establishments.

“Retailers, looking at long-term investment and commitment to retail stores, have been using this format to incubate and test new concepts and see how the market responds,” said Meghann Martindale, Global Head of Retail Research for CBRE.

“We’ve seen pop-ups used for a few years now to test products, store ideas, and brand collaborations. What’s changed is that the concept has become much more mainstream—pop-ups are a more permanent fixture on the overall retail landscape, and it’s not just start-up, incubator, or digitally native brands, but tried and true legacy brands as well.”

“Several luxury brands have been trying out this format for some time,” said Annette Healey, Executive Vice President at CBRE. “They will do a promotion where the consumer can pick build their own choices for a product: signatures, colors and so on. Others have used pop-ups to introduce a new fragrance or specific brand extension.

That said, the most common user of pop-up stores still seems to be online brands testing a “clicks-to-bricks” strategy, determining the viability of a physical presence while offering consumers a unique retail experience.

“A lot of online retailers have recognized that they have a great opportunity to further expand customer engagement if they pop up,” said Nicole LaRusso, Director of Research & Analysis for CBRE’s tristate region. “Then there are retailers whose expansive year-round brick-and-mortar presence became a liability because their in-store sales didn’t justify the rent and operating expenses. So now some use brick and mortar selectively in strategic locations at strategic moments, like holiday time.”

“One is platform due diligence,” she said. “Retailers moving from an online presence can test if brick and mortar works for their platform. Does it enhance their e-commerce? Is it additive to their process? Does it provide a closer touch to what their customers want? Then there’s market due diligence. If they’re unsure of a particular market — Upper East Side, Upper West Side, etc. — they want to see if it will work. Then, third is that the retailer can generate editorial buzz either at a brand or specific product launch level.”

Pop-ups hold special appeal to consumers due to the uniqueness and exclusivity of the experience they offer.

“The idea of a pop-up is that you’re offering customers a special experience because it’s limited. The offerings are not what you get every day,” said LaRusso. “There’s an opportunity for the customer to touch and feel things that you can’t when you’re just browsing things on Instagram. There’s something enticing about being able to interact with not just the merchandise, but the brand itself.”

Once the results of these experiments are in, retailers are frequently converting their pop-ups to permanent brick-and-mortar retail establishments.

“Increasingly, my clients who are testing the real estate landscape for the first time with pop-ups are moving toward longer-term deals. What used to be deals of three to six months are now one to two years, and often with one- to three-year options attached,” said Cassie Durand, First Vice President at CBRE. “Brands have found that after three or even six months, they are just starting to take away key learnings and apply them, and to develop a customer base that knows who and where they are. By the time the brand starts to break even and educate their customers, they have to close their doors. So I’ve seen a lot more movement toward taking a bigger bite of the apple with that first deal so there’s sufficient time to learn and become profitable before their lease expires.”

For companies seeking to test the pop-up concept, few times and places offer better saturation than New York City over the holidays. The number of companies popping up here for the holiday season is vast, from fashion and apparel companies like Mejuri Vault (with a five-year anniversary pop-up), Paige (a shoe pop-up), Thinx, and ThirdLove, to less traditional pop-up uses like daily news blast The Skimm, Polaroid, and even Tupperware.

“New York has led the rest of the country in using pop-ups to test concepts because if it’s a digitally native brand testing bricks and mortar, they know their customers are already here,” said Martindale. “But also, with the excitement and sophistication of the New York landscape in general, it’s a great platform for brands to get exposure to both residents and tourists because of the sheer volume of people here.”

Another retail phenomenon CBRE cites in its report is the procedure for buying online then picking up products in-store, known as BOPS (buy online, pick up in-store). As consumers seek additional convenience, being able to buy merchandise online and pick it up at nearby physical locations is increasingly attractive.

“This is a great example of an omnichannel strategy,” said LaRusso. “It’s a way to link your brick-and-mortar business and your online business.”

Buy online, pick up in-store has been especially meaningful to retailers this holiday season due to the compressed time frame between Thanksgiving and Christmas, with the former coming later in the calendar year.

“Delivery pressure is really on retailers because consumers are buying more online and want packages delivered with a quick turnaround, oftentimes free of charge,” said Martindale. “Then, with the compression this holiday season, ship-to dates are a lot sooner than they normally would be. [BOPS] helps extend the shopping deadline because oftentimes retailers can get the products to the store quicker than they can to someone’s home.”

The other trend noted in CBRE’s report is the boom in secondhand luxury fashion driven by economically and environmentally conscious millennials and Gen Zs, which is finding particular relevance in New York.

“New York has always had a vintage culture. That’s always been part of what people come to New York for,” said LaRusso. “It’s both affordable and hip to wear something retro, and now that’s going mainstream.”

“The stigma of secondhand clothing is waning, and that’s largely consumer driven,” said Martindale. “Consumers today are more environmentally aware and socially conscious. We’re seeing a huge rise in the luxury market with millennials and Gen Z, but they’re more economically sensitive since they just entered the economy. So we’re seeing this confluence of being environmentally sensitive and reusing products, and being very fashionable.”

LaRusso notes that companies like Poshmark, Depop, The RealReal, and thredUp have thrived as marketplaces for used fashion. Sales of vintage clothing, defined as any clothing at least 10 years old, made up 40 percent of all fashion sales last year.

“More and more retailers are entering this market, including brands that accept the recycling of their own brands in store,” said Martindale. “Madewell is doing that with jeans, and H&M has a clothing donation program as well.”

While many have decried the death of retail in recent years, LaRusso emphasizes that these trends signify instead a transformation for retail, which is shifting to serve consumers increasingly living in a faster-moving, online-based, and more time-conscious and demanding world.

“Over the last few years, CBRE has been at the forefront of saying [that] this is not the death of retail, but an evolution,” LaRusso said. “We should be keeping an eye out for where the underlying fundamentals of demand are strong. Retail sales continue to grow overall, and they continue to grow in New York.”