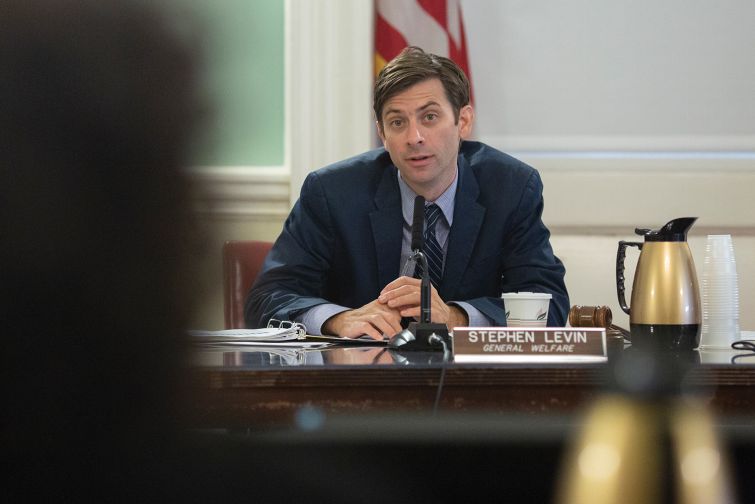 Those real estate professionals who thought commercial rent control was safely slain might rightly be worried that they’re seeing ghosts.

A new bill introduced by Brooklyn Councilman Stephen Levin on Nov. 15 would set up a form of rent control fashioned after the way the state handles rent-regulated apartments.

It calls for the city to establish a board that would put caps on rent increases for retail, manufacturing and office space, according to the legislation. The caps would apply to non-chain businesses under a certain square footage across the city.

“Independent small businesses are a treasure of the city in so many ways,” Councilman Brad Lander, a co-sponsor on the bill, said. “Rising commercial rents really are so badly undermining that you have businesses that just can’t make it.”

“They’ve got other pressures as well,” Lander added. “But in so many neighborhoods, it really is the rents that make it impossible.”

The board would set the maximum amount rents could be raised by July 1 annually and only allow for one increase per year.

Storefronts already occupied would be subject to the caps under the tenants’ current rent while ones still vacant after the bill passes would use the terms negotiated during a lease as the basis for future increases set by the board.

If passed, the bill would be a much bigger win for tenants than the most recent stab at commercial rent control, which languished in the hearing phase in 2018 and which tried to give more power to tenants during lease renewals.

While Levin’s proposal is co-sponsored by nine other City Council members, aside from Lander, the Real Estate Board of New York and the industry have come out in full force against it.

Jeffrey Roseman, a vice chairman of Newmark Knight Frank’s retail division, said commercial rent control was just as bad an idea as one from “Seinfeld” when a character suggested every New Yorker wear name tags in public to make the city friendlier. (That plan was one of the reasons David Dinkins loses his mayoral re-election campaign to Rudy Giuliani in the show’s fictional universe.)

“It’s just so absurd,” Roseman said. “The concept is absurd, government getting involved in these types of things. It makes no sense. Retailers that are doing business either renew their lease or they move across the street cause someone else would be happy to have them.”

One of the arguments REBNY has made against this and other similar bills floated in recent years is that it doesn’t “get at the root causes of what challenges are facing small businesses,” like delays in the city granting permits, said Reggie Thomas, a senior vice president for government affairs at REBNY.

“It takes longer and longer to get liquor licenses in certain areas of the city,” Thomas said. “This is something that the city could actually help address.”

Joanne Podell, an executive vice chairman of retail services at Cushman & Wakefield who testified against a similar bill in the City Council last year, stressed she thinks the politician’s hearts are in the right place with the commercial rent control legislation, but ultimately it will do more harm than good.

“There will be consequences that will affect not just retail but the city budget as well,” Podell said. “When you start to control [rent], you would now formalize rent that will not allow for additional [commercial rent] tax revenues.”

Lander pointed out that the bill still allows for yearly rent increases — that are set by the board — and the goal is not to put the burden on landlords if costs continue to rise.

“The landlord is not going to be stiffed out of an increase to cover higher insurance or higher fuel bills,” he said. “It’s to prevent speculative increases that don’t have to do with the actual costs the owner is paying but more with what gentrification is bringing.”

But Podell also had concerns that it would lock in tenants that are no longer needed in a neighborhood, while Roseman feared it could stick owners with troubled tenants for years.

“If they’re not doing business and they’re looking to beat the system, why give them the opportunity to do that?” Roseman said. “If a tenant has not been a great tenant why does an owner have to make a deal with them, especially if it’s not working?”

While Levin’s bill is new, the idea of commercial rent control in the city isn’t. The city had a form of it through a state law in 1945, but it expired in 1963, according to the New York City Bar Association.

Residents and politicians started to push for commercial rent controls to return in the 1980s after small businesses, faced with large rent increases, started closing up shop around the city, City Limits reported.

“There were small businesses losing their business left and right and there were landlords refusing to negotiate,” Ruth Messinger, a former Upper West Side councilwoman who introduced the Small Business Jobs Survival Act (SBJSA) in 1986, previously told Commercial Observer.

SBJSA — commonly referred to as commercial rent control, though supporters say that’s a misnomer — would require landlords to offer a minimum 10-year lease renewal to commercial tenants that haven’t run afoul of guidelines set in the bill, things like constant rent checks or using the space for illegal activity. It leaves it up to the tenants to decide if they’ll renew and sets up an arbitration process if both parties can’t agree on a new rent.

“The landlord can’t simply refuse to re-up the lease or just wait to the very last minute and announce terms that nobody wants to meet,” Messinger previously told CO.

SBJSA faced its only City Council committee vote in 1988 where it was rejected five to four, City Limits reported. It was reintroduced again in 2009 and a third time in 2015 but was squashed by then-City Council Speaker Melissa Mark-Viverito.

Last year, Councilman Ydanis Rodriguez reintroduced the bill again — with support from 25 councilmembers — and in October 2018 Council Speaker Corey Johnson held a long public hearing on it. Unlike the new bill, SBJSA doesn’t limit how much a landlord can raise the rent during a renewal, it only requires them to offer one.

Proponents of the bill said it was vital to pass now as the city lost long-term businesses like Tortilla Flats in the West Village and deals with what they feel is a vacancy crisis of storefronts around the city.

A report from Comptroller Scott Stringer found that the citywide vacancy rate grew from 4 percent in 2007 to 5.8 percent in 2017 while the amount of empty space increased from 5.6 million square feet to 11.8 million square feet in that time. (The Department of City Planning earlier released a report that showed there’s not a “pervasive vacancy problem” citywide and Roseman said Stringer’s report doesn’t address the amount of newly built retail space around the city.)

C&W’s Podell added that landlords generally don’t want to keep retail spaces vacant, because it costs them money and takes at least a year to find a new tenant, and the market self-regulates.

“This is just supply and demand, it will change,” Podell said. “[The vacancy rate] is under 10 percent, which is not a terrible number, it’s just that they’re in high-profile areas. It will change as the rents come down, which they are.”

SBJSA has laid dormant since the hearing, but supporters of it are behind Levin’s commercial rent control bill. David Eisenbach, who founded the Friends of the SBJSA, said even though he still prefers the arbitration process set up by the SBJSA, he’ll take anything to help small businesses.

“Leaving it up to an arbitration between an individual landlord and tenant is a better way versus this annual fight [with commercial rent control],” Eisenbach said. “Having an annual fight [over rent increases] citywide or area-wide is better than having nothing.”

He added: “What I’m totally against is doing nothing and allowing what is a broken rent market to continue.”

Lander — who did not co-sponsor SBJSA — said the new bill is an improvement in several ways, like not treating a Goldman Sachs the same as a bodega, but mainly it’s a lot less confusing.

“The other bill sets up a complex mediation process. This is really simple,” Lander said, “It really provides the protection that the small businesses actually need.”

Both last year’s and this year’s attempt to pass legislation faces stiff opposition from the real estate community and other groups. Powerful service workers union 32BJ, the Building and Construction Trades Council of Greater New York and the New York City BID Association — made up of the managers of the city’s 74 business improvement districts — opposed SBJSA.

The heads of the Brooklyn, Manhattan and Queens Chamber of Commerces all came out against the commercial rent control bill last month, along with the Downtown Brooklyn Partnership, the Alliance for Downtown New York, the Rent Stabilization Association, the Council of New York Cooperatives and Condominium and the New York Building Congress. Mayor Bill de Blasio also publicly questioned the proposal.

“Every time that I’ve been in conversation over the years on commercial rent control, I can’t find a legal way to do it,” de Blasio said at an unrelated press conference last month, according to the New York Daily News. “I’m sympathetic to the idea … but, to date, I have not seen a commercial rent control plan that actually legally works.”

Last year, the bar association released a report that stated since no state law “expressly authorized the city to control rents,” the only way it could pass a form of commercial rent control would be under the city’s “health and welfare” powers.

“Whether the power to enact commercial rent control is within the city’s general health and welfare power has not been specifically decided by the courts,” the report reads.

Levin told Crain’s New York that he thinks the city is well within its rights to pass commercial rent control and Eisenbach’s group has long maintained the same position for SBJSA.

The commercial rent control bill was moved to the council’s Committee on Small Business. If passed in the committee, it would be up to Johnson to bring it to a hearing in front of the full City Council and eventually call a vote on it, needing at least 26 members’ approval to pass. Levin’s bill only has ten co-sponsors so far, but the SBJSA had 25 members signed on to it.

Johnson has told the Daily News that he’d work with Levin on the legislation, adding: “We want to draft a policy that looks at the entirety of the city.”

Proponents of SBJSA have said that people have wrongly labeled it commercial rent control throughout the years to try to squash support and Eisenbach said it would be ironic if Levin’s bill actually passes.

“At this point, they could regret not having gone or allowed SBJSA going forward if they wind up with something that, in some ways, could be more radical,” Eisenbach said. “That could be the ultimate irony of this whole thing.”