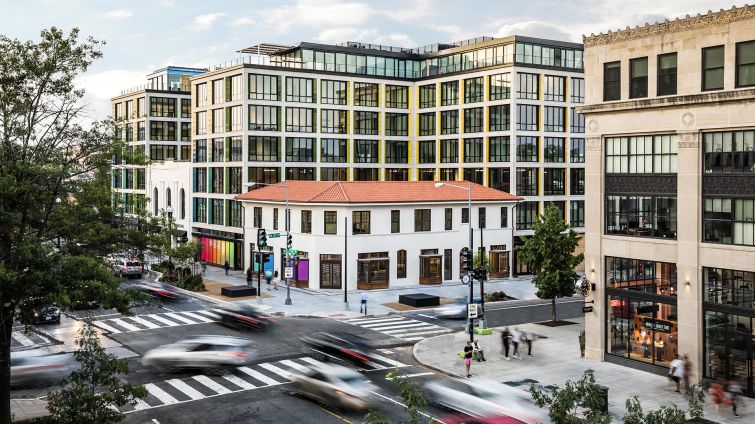 Lyric, which operates flex apartments in city centers across the country, is opening 11 creative suites at Liz, a seven-story, luxury mixed-use building in Washington, D.C., today, Commercial Observer has learned.

Located at 1357 R Street NW, the block-long, 160,000-square-foot property is owned by a joint venture between Fivesquares Development and Whitman-Walker Health System.

Lyric’s creative suites will include a gourmet kitchen and open workspaces. The five-year-old company was created with a focus on design, technology and community so travelers could feel more a part of the area they’re visiting.

“We consider D.C. a tier one market and one of the top travel markets in the country, and my only regret with this deal is that we couldn’t do a larger install because I think the market is worthy of a larger presence from us,” Joe Fraiman, Lyric’s co-founder and president, told CO.

Lyric has a five-year lease at Liz, with possibilities for two extensions of five years each. The building’s retail component includes Bluestone Lane Café, Parachute, and Sephora.

Liz has been undergoing a redevelopment for more than three years, and is comprised of Whitman-Walker’s headquarters, 78 residential units and retail space. Both the former Elizabeth Taylor Medical Center building and the Belmont Garage were preserved as part of the project.

“We want to work with the best local and national developers in every market, and the Fivesquares team’s reputation really preceded itself. They have been doing some of the most interesting work in the D.C. market,” Fraiman said. “All of the things we focus on were near and dear to their heart, whether it’s about quality, community or technology, so it was a clear match from day one.”

The suites were designed to reflect the area’s eclectic mix of art, culture, civic life and commerce, he said.

“We’re also bringing in local elements of the community, so record players with local artists’ records are included, custom-designed wallpaper that’s locally inspired, and we bring in great local photographers and blow up their work gallery-size and put them up on the walls,” he said. “We’re telling a modern, local narrative of the city, so you’re not just staying in a suite that could be anywhere.”

The building also boasts a fitness center, indoor and outdoor rooftop lounges and a cultural center for LGBTQ+ voices run by Whitman-Walker.

“Liz is all about exquisite design, exhilarating cultural experiences, and community,” Ron Kaplan, Fivesquares Development’s co-founder and principal, said in a prepared release. “Lyric’s imagination, aesthetics, and focus on community make their unique product the ideal complement for our one-of-a-kind building—and a great amenity for our residents.”