Invesco’s Robert Deckey on Its $1.2B Affordable Housing Buy, 888 Broadway and Netflix

Robert Deckey is a managing director of the $80 billion behemoth Invesco … not a bad consolation prize after he turned down Apple. 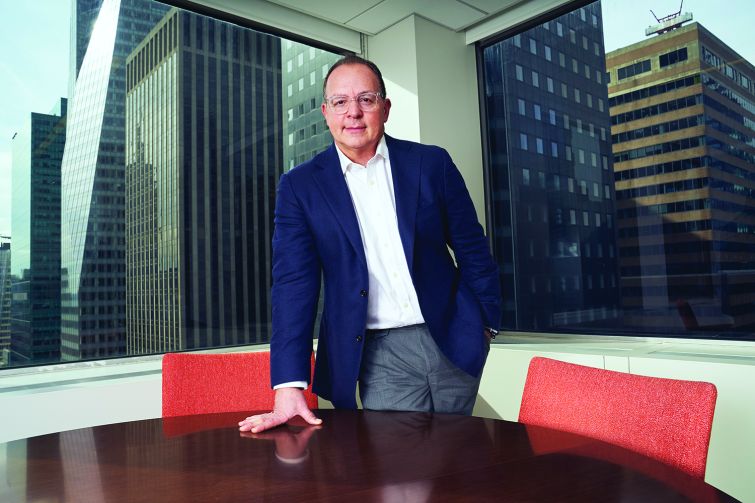 Robert Deckey started off his career making one of the biggest “investment decision mistakes” of his life, as he put it.

Deckey was studying electrical engineering at Brown University and trying to figure out what he was going to do after graduation. A senior advisor suggested he checked out a then little-known company: Apple. He could build microchips for them.

“I was like, ‘Where’s Cupertino?’ ” — the California city home to Apple’s corporate headquarters —  “and, ‘Who wants to go work for a company named after a fruit?’ ” Deckey said. “I went, and I saw [the office] and they were in lab coats and I was like, ‘That is so boring.’ ”

Instead, he met with some developers.

Apple became one of the largest tech companies in the world, but Deckey’s decision still worked out for him.

He earned a master’s in finance from the Wharton School and started working at various real estate companies and banks. In 2016, Deckey left his post at George Comfort & Sons to become a managing director at the global behemoth Invesco Real Estate — which has about $80 billion in assets under management in 16 different countries — where he heads acquisitions on the East Coast in cities like New York, Boston and Washington, D.C.

The company recently partnered with L+M Development Partners and dropped $1.2 billion on a portfolio of five former Mitchell-Lama developments in Harlem and on Roosevelt Island. As part of the deal, Invesco and L+M will return about 1,800 apartments to affordable housing while the rest will remain at market rate.

Invesco also bought the upper floors of the former ABC Carpet & Home headquarters at 888 Broadway in the Flatiron District with Normandy Real Estate Partners, paying $130 million in 2017, and started work turning the space into a modern office condominium. In April, streaming giant Netflix inked a deal for 100,000 square feet in the property to house a 127-person corporate office.

When he’s not working, the 56-year-old Upper East Side resident enjoys spending time with his two children and is involved with the Museum of Modern Art, traveling around the world to visit different artists.

Commercial Observer: What made you decide to come to Invesco?

Robert Deckey: I would say it’s a combination of one, the culture — even though it’s a big institution, the culture here is amazing. Everyone here is amazing, everyone is very collaborative and great to work with as a team. And then, secondly, because of the global perspective it has. It really does amazing research about the future of real estate. I loved getting that perspective, even though my job is very similar between what I did before.

Can you tell us a bit about how the deal with L+M came about?

We identified L+M as a great partner, and they have a great expertise and reputation in affordable housing. So, we said, “While everyone else is trying to take apartments out of affordability, let’s do the opposite.” When we heard this portfolio was coming to market earlier this year, we identified it to work together.

We like to call it double-bottom-line investing, where we’re doing really good for New York because we’re creating affordable housing. These are probably going to be mostly for nurses, teachers, firemen and then, also, it includes 7 percent for formerly homeless families that are trying to get back on their feet. And so it’s double-bottom-line investing because it’s doing good for New York, but also making good profits for us.

What appealed to you about L+M? Was it their management team or their way of looking at business?

I would say it’s both of those. Their management team is very similar to Invesco. They’re incredibly humble and smart. And they have a very innovative business plan that’s very different than most of the other developers out there. Second was this value-added business plan that was unique. In today’s world, where we are in slow growth, we have to find innovative business plans that generate above-average returns, so we’re seeking partners who have competitive advantages in creating better returns through innovations.

Are you looking to do any more deals like this?

We would like to. What has happened since the new regulation bill is the investment sales of apartment buildings have dropped quite significantly, so there aren’t as many large portfolios like this for sale.

Is it that because owners are just waiting and they don’t want to sell?

Yes. If you have a building that has rent stabilization, this bill has significantly curtailed your future growth. So there has been a large drop in value in rent-stabilized buildings. Most sellers won’t acknowledge that significant drop. It’s anywhere from 10 to 40 percent.

What do you think appealed to Netflix about 888 Broadway in particular?

I think the restaurants make a place, so we’re looking for assets today that have placemaking. Having three great restaurants on the first floor [of 888 Broadway] creates a sense of energy. Second, the architecture of the building has 33,000-square-foot floor plans — which are very large for that Flatiron district — and the ceiling heights are very high. So they thought they could put in mini theaters for screenings and movies and do different types of space that you can’t do in a traditional office building.

You had the idea to appeal to creative tenants. Was getting Netflix proof that you had the right idea?

We kind of felt that the F.A.N.G [Facebook, Amazon, Netflix and Google] would show up in that space. We didn’t know which one, but we figured one of them would come.

Do you think the market is already in a correction?

Yes. Let’s go by property type. I would say Midtown office buildings peaking in value in 2015 and they are down quite substantially since then. That has been a correction that’s been caused by two factors: One is the flight of companies to new construction in Hudson Yards, World Trade Center and Midtown South. Secondly, foreign investors are not coming here like they did in the past. Obviously, China has pulled out, Russian billionaires are not buying here anymore and the strength of the dollar and negative interest rates in Europe have made currency very expensive.

In residential, the last three to four years — because of all the new development and because of this new rent regulation bill — I would say rents are soft to down.

Lastly, retail. The availability on Fifth Avenue and Broadway is approaching 20 percent and rents are declining quite a bit. So when you look at the three primary property types in New York, I would say that we are in a recession; we’re in a bear market.

I think you’ll continue to see retail rents decline. I think multifamily is going to be interesting with development tapering off — it peaked this year — so we’re seeing new supply drop off quite substantially. Then because of the rent-stabilization bill, many landlords are keeping their units vacant rather than leasing them, so that’s going to probably generate some good rent growth in the apartment center. In the office sector, as long as the technology tenants continue to grow, I think we’ll see the imbalance continue. I think you’ll see further growth in Midtown South and, as tenants move to Hudson Yards over the next year or two, further vacancy in Midtown.

Are there any pockets of distress right now creating opportunities in the market?

I would say the pocket of distress is obviously retail. We’re seeing lots of loan foreclosures there. In multifamily we’re seeing distress with rent-stabilized sellers who bought buildings at, say, two and a half cap rates because they were rent-stabilized and now they’re valued at five and a half cap rates. The lenders are starting to take back many rent-stabilized buildings. Third, in condos, there are about 6,000 unsold condos and I think we sell 1,000 a year, so that has been a big decline. And we’re seeing also on the office side this year particularly, a number of ground lease sales that have happened because of the fair market value reset in some of these ground leases. We’re seeing a sharp decline in leaseholds.

Do you think next year you’re likely going to try to set up your acquisitions or keep it around the same level?

I’m hoping we have more opportunities to buy because of the softness in the marketplace.

In terms of your financing, do you tend to work with the same lenders?

We are really open to all different types of lenders. Since each one of our assets has a unique strategy and is in a different fund, we have different debt targets. For our last two multifamily acquisitions with Avalon [Invesco bought the majority stake in five Manhattan buildings from AvalonBay Communities in 2018] and L+M, we’ve used Fannie Mae. They’ve provided us with excellent execution. For ABC [at 888 Broadway], for example, we had a bridge loan from SL Green and then we just refinanced with TPG [Real Estate Finance Trust].

How do you work together with Invesco’s loan origination team [led by Bert Crouch and Yorick Starr]?

We view lending as really a relationship business. We did ABC with Normandy and we made them a loan at 89-90 Maiden Lane, so there’s that connection. We own 80 Broad Street with Broad Street Development, they bought 370 Lexington Avenue and so we decided to be their lender there. It’s all connected as a relationship business. Because our team underwrites every building in New York City that’s for sale, we have full knowledge of “You should lend on this building.” “Be careful on this building.” “I would be careful of this lender.” “I like this lender.” “That’s a bad strategy.” “That’s a good strategy.”

We are providing guard rails for our lending strategy and then also our relationships.

You also focus on Washington, D.C., and Boston. What are you looking at in those markets?

Boston obviously has amazing growth with technology in the lab, so that is definitely a high focus there. We’re also building a lab in D.C. We’re doing life science in Boston and D.C. and we’re trying to figure out how to bring it to New York.

What worries you right now in the market?