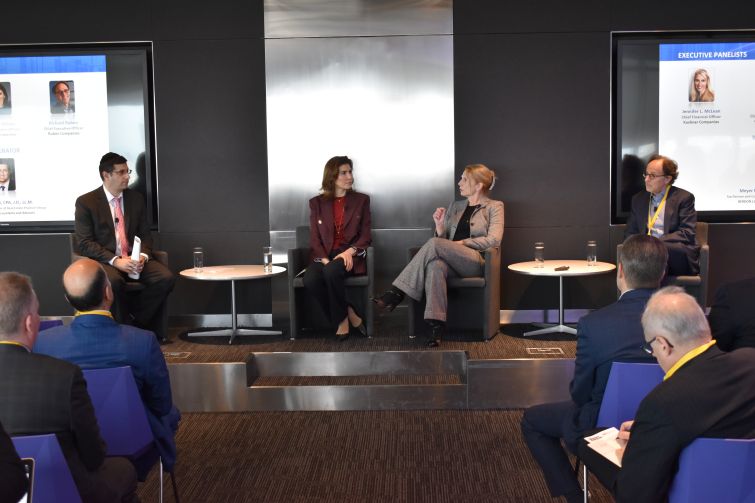 On November 19, Berdon LLP, Accountants and Advisors, in conjunction with the Bloomberg Media Group, hosted the 2019 Real Estate Industry Executive Forum at Bloomberg’s offices, consisting of two panel discussions about the state of the industry.

Riccadonna characterized 2020’s economic outlook as “gloomy, but not awful,” noting that the recent tax cuts should have boosted GDP growth to 3 or 4 percent, but that the growing trade war slowed it down to 2.2 percent. Riccadonna considers the growth “good enough,” but said that should this number drop to 1.5 percent, the Fed will need to intervene.

As we’re in the longest economic expansion in decades, Riccadonna notes that economic cycles have been getting historically longer, though he also said that measuring cycles by the calendar is a “lousy” way. It’s more important to note that economic indicators are “still well balanced,” he said, while also acknowledging that recent gains have been below average.

He said it’s more important to observe consumer spending, and that consumer confidence is currently holding up because “paychecks are growing faster than the rate of inflation.” All indicators say we should expect more of the same, since unemployment is at its lowest level “since the draft was in effect for the Vietnam War.”

Moving on to the low interest rates in the U.S., Langbaum said that “as long as interest rates stay where they are, there’s no reason why cap rates should move, especially with liquidity in the system.”

“There is so much liquidity coming from investor sources that there’s no clear catalyst for valuations to start to decline, or for rates to move higher,” he said.

With 10-year rates edging higher over the past month and a wave of refinancings in the residential mortgage sector, talk of an upcoming recession has cooled down, he said. Seeking to put the current trade war in perspective, he noted that tariffs totaled $33 billion last year, rising to $34 billion this year. In a $20 trillion economy, this amounts to little more than a “spit in the ocean.”

“There were new tariffs going into effect that were going to be as big as all of last year’s tariffs, but they’ve been taken off the table,” he said, citing this as a reason the overall economic outlook has improved.

Langbaum talked about how landlords in Midtown East will be dealing with increased vacancies due to companies moving west by Hudson Yards, saying that the key to survival will be liquidity, which can be invested into the properties to upgrade their facilities.

“It’s not a geographic issue. It’s a modernization issue,” he said, noting that landlords who update their buildings and keep their lobbies and amenities competitive should do well.

The panel touched briefly on the much-discussed issues surrounding coworking and WeWork, saying that while workers clearly like the format, the pricing model is still a question mark, and increasing landlord partnership and involvement will be needed to further the trend. However, the biggest issue has been their IPO valuation, as it was overpriced.

Riccadonna discussed how changes in the SALT deduction have had a “brutal” impact on businesses on the coasts, with Golbert adding that “anyone who can be somewhere else (but New York) is either doing it or thinking about it.”

The panel also discussed inflation, with Golbert pointing out how those who say we have no inflation fail to account for higher costs. Riccadona confirmed that he has seen the same inflation in costs of services, but we are still below the Fed’ desired target rate of 2 percent.

Bringing the conversation full circle, Riccadonna noted that the economy should remain relatively stable unless consumers lose confidence, as consumers are 70 percent of the economy. The good news? “It’s hard to knock consumers off their perch with an unemployment rate of 3.5 percent.”

Focusing on the multifamily sector, Ruben cited a supply problem on the east coast due to a “huge amount of multifamily development in numerous cities,” and said that projections of rental growth will not materialize.

“Demand will eventually catch up with supply,” he said, “but it will be difficult to raise rents in multifamily for the next year or two.”

On the new rent laws, Olshan said that landlords have misunderstood the best ways to process them, noting that “a lot of people are holding product offline and not updating units.” She also highlighted a potential concern that the new regulations will have the opposite effect of what was intended, as landlords will be de-incentivized to make necessary improvements to buildings.

The panelists all acknowledged that a significant challenge for residential landlords has been the increased need for package space, as new tenants often expect that to be included with the rent. “People move with nothing, then order everything from Amazon,” Ruben said.

McLean noted that the Kushner Companies have even converted prior retail space to package space for adjacent multifamily, and Olshan said that buildings with large basement or storage spaces were sometimes re-adapting them for incoming packages.

Retail space is also being converted to coworking amenity space, said Ruben, (although at an extra charge for tenants), and McLean added that their director of IT is now involved in their high-rise residential development discussion due to the increase in tenants’ demand of widespread and uninterrupted connectivity throughout those buildings.

When asked about development challenges, McLean said that “with unemployment being so low, we are challenged in finding the right people, and are increasing benefits such as financial management classes and tuition reimbursement to stay competitive”.

Between new regulations and increased taxes, both McLean and Olshan said this was a scary time to be a landlord, noting that they’re pulling New York properties off the market and writing them down.

“We’re looking at where we can strategically refinance these assets and get through the cycle,” said McLean. “It’s a scary time, in terms of risk, for landlords.”

Although the economic forecast is positive heading into 2020, recent regulations and market shifts in the New York Metro real estate market provide some cause for caution.