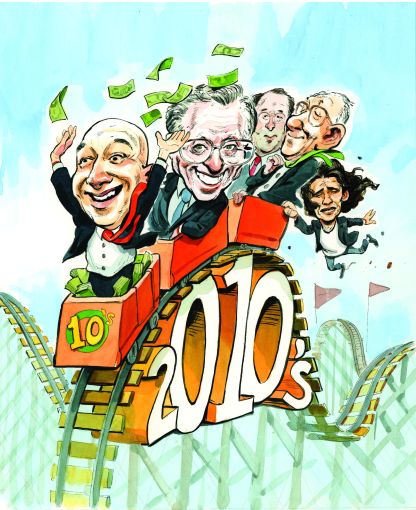 Eleven years ago, when I was a reporter at the New York Post and Lehman Brothers collapsed, I began calling the residential real estate brokers and developers I knew and asking them what they made of the situation.

Lansill was not the dreariest voice I spoke to, even if he was one of the only ones who had the guts to say something so honest on the record.

The real estate landscape was frightening in 2008 and 2009. Whenever I asked the graybeards of the industry what the next steps were, it was like I was a teacher calling on a class of truants. Nobody knew any answers. Everything looked bleak.

Now, at the beginning of the 2020s, the economy is humming. The luxury condo market gave way to the super-double luxury market, with One57 selling units north of $90 million, and 220 Central Park South selling an apartment for a quarter of a billion dollars.

The office market saw a city-within-a-city take root and bloom in the form of Hudson Yards, which finally saw the opening of its first phase in March. One Vanderbilt drove in its stake next to Grand Central. And after years of political and economic battle, World Trade Center has largely opened.

Toys “R” Us, Barneys, Forever 21 and Sears were all stable, well-respected retailers in 2010. They’ve now fallen into the chasm of bankruptcy.

Second Avenue remained the punchline to a yeah-it’ll-never-happen project, not a subway line. It’s there now. Same for the 7 train extension.

It was all a lot to take in. And that’s why, rather than simply recounting what happened this year, we at Commercial Observer thought it would be better to take a step back and look at what has happened over the decade.

Nicholas Rizzi, Rebecca Baird-Remba, Chava Gourarie and myself look at what happened broadly in real estate this year.

We decided to examine the banner deals of the last decade; how construction in general fared over the last 10 years; how the office market shook out; and when brokers knew that the retail Armageddon was upon us.

It’s been, as we tried to say on our cover, a roller coaster ride. We’re not ready to get off yet.