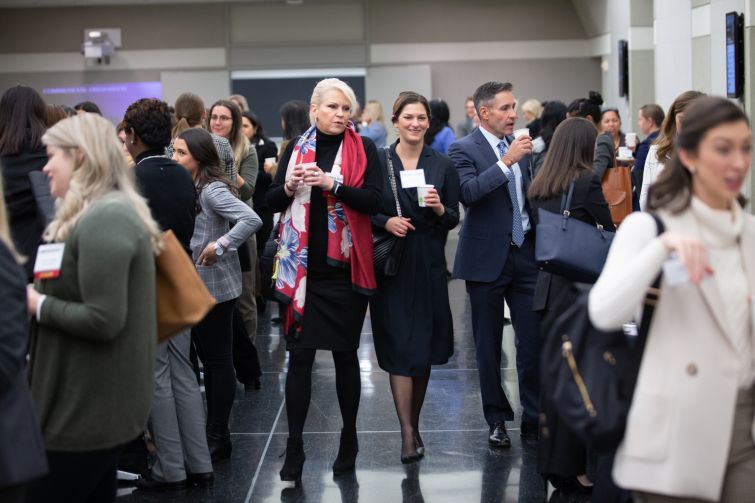 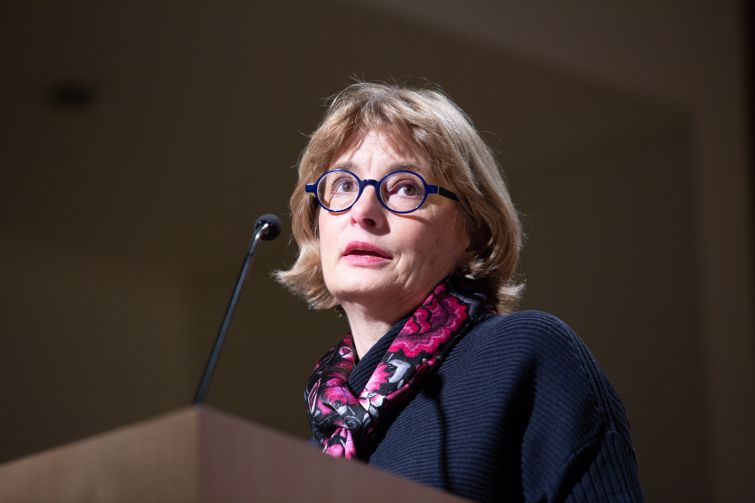 Vicki Been talks about her mother becoming mayor of her small hometown in Colorado during her keynote speech at the conference. Photo: Aaron Adler/For Commercial Observer 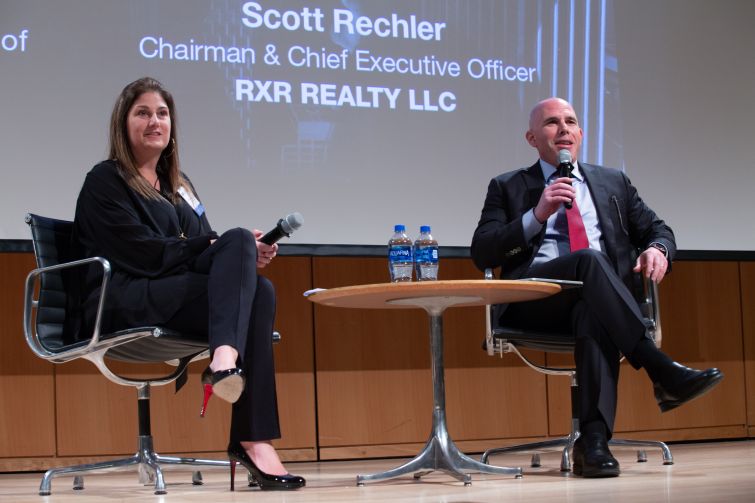 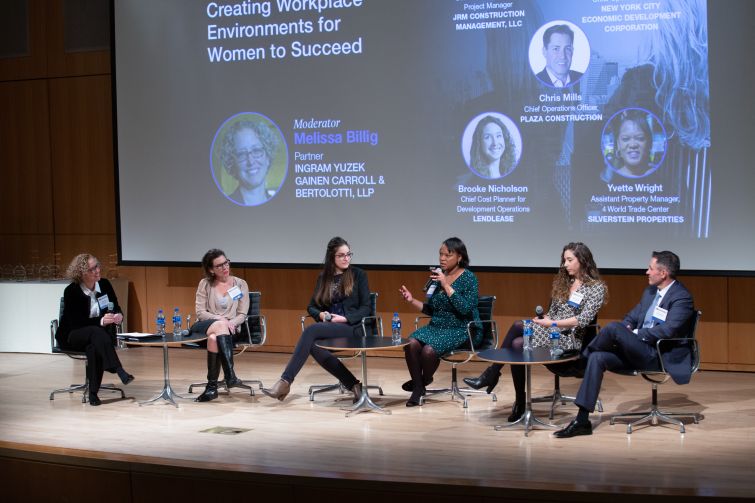 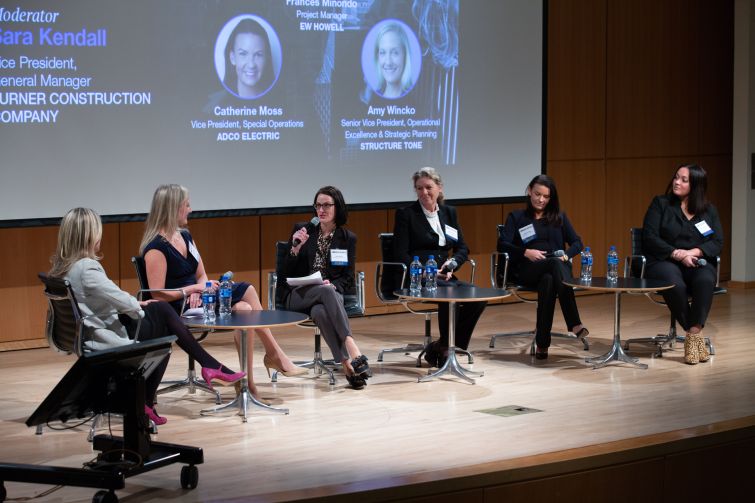 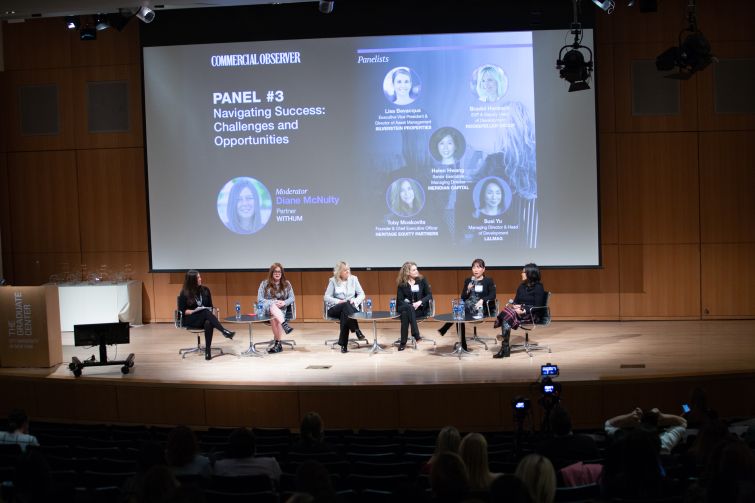 Diane McNulty of Withum, developer Toby Moskovits of Heritage Equities, Brandi Hanback of Rockefeller Group, Lisa Bevacqua of Silverstein Properties, Helen Hwang of Meridian Investment Sales and Susi Yu of L&L Mag discuss how they got to where they were in their careers, even as men often underestimated them. Photo: Aaron Adler/For Commercial Observer 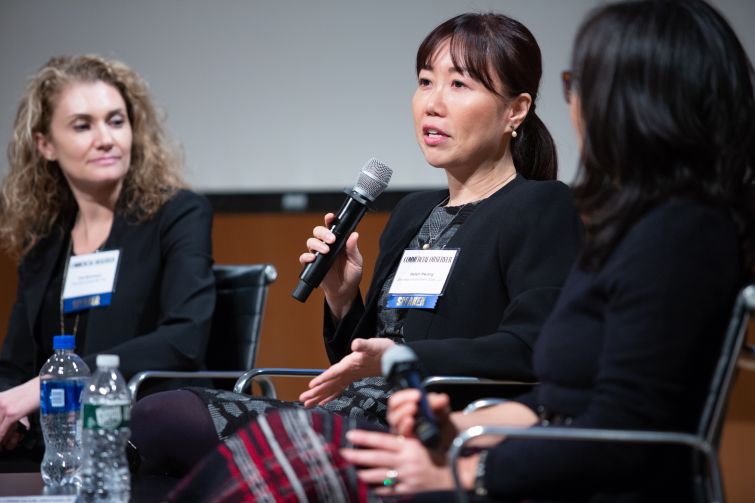 Helen Hwang, an investment sales broker at Meridian, recalls how she felt when she was tapped to lead a new investment sales team at Cushman & Wakefield. Photo: Aaron Adler/For Commercial Observer 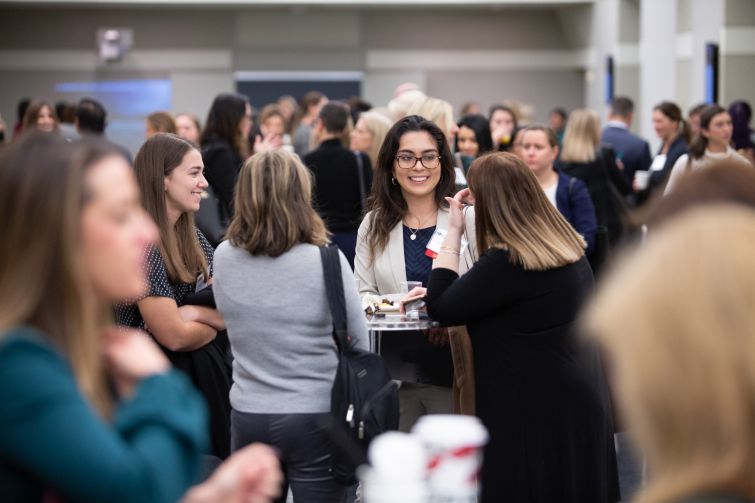 “As Ginger Rogers said, ‘I do everything that Fred Astaire does, backwards and in heels,’ ” said New York City Deputy Mayor Vicki Been, who opened Commercial Observer’s Women in Real Estate conference on Nov. 13.

While decades have passed since Rogers graced the screen, the sentiment is still a familiar one for professional women striving to be recognized for their work in real estate. The CO event, which featured top executives in the construction, development and real estate finance industries, discussed the challenges that women face in these male-dominated worlds, including discrimination, advancing into the C-suite and managing child care and a career.

Been, who oversees housing and economic development programs in Mayor Bill de Blasio’s administration, went on to praise the various women’s job training initiatives launched during the mayor’s tenure.

The former commissioner of the city’s Department of Housing Preservation and Development also talked about how she went into politics because of her mother, who was elected mayor of Been’s small Colorado hometown. “Representation matters. I wouldn’t be standing here today if I didn’t have that strong mother figure,” Been said.

Next up on stage was RXR CEO Scott Rechler and his company’s head of marketing and retail leasing, Whitney Arcaro, who discussed how she climbed the ladder in the male-dominated commercial real estate world. Arcaro worked in the music and tech industries before working on the trading floor of a financial firm.

“Back in the day I was the only girl in the cage,” she said of her time as a securities broker. “I had to be on the phone and canvass … [My coworkers] were completely overselling themselves, on the phone, and I’d use email and sell my boss. It was based on perspective and being polite and knowing my place.”

During the first panel, women (and one man) in the construction world discussed what it’s like to be a woman on the job site.

“It can be intimidating to be the only woman on a construction site,” said Christine Estrada, a project manager at JRM Construction. “It can sometimes play to my advantage, being the only woman in a meeting. [The attention] may start as cynical, but when I can speak intelligently all the disparity disappears and everyone just moves onto their jobs. I think that’s something we need to communicate to everyone, that this is a female-friendly environment.”

Mills, along with all of the women on the panel, emphasized that making the construction world more female-friendly would involve allowing women caring for children or elderly parents at home to work more flexible hours.

“I wouldn’t be able to spend time with my 1-year-old if I still worked from 6 [o’clock] to 6, which is what I worked before I had a child,” said Estrada.

“I think construction managers [should be] wrapping their heads around flexible work hours, working from home,” said Mills. “I think we have to break the mold from the past and look at what the construction management firm of the future looks like.”

Rachel Loeb, the COO of the New York City Economic Development Corporation, said it was very important for breastfeeding women to feel welcome in an office environment.

“I remember coming back from maternity leave and being forced to pump in a closet and the head of construction [at my former company] telling me that my milk in the fridge was gross,” said Loeb. “Our new offices have four new beautiful wellness rooms.”

The next discussion revolved around how companies can create an environment to encourage women leaders in the construction industry.

“I went to [speak at] a school in Brooklyn and they thought I was an airline pilot because I had a blue suit on,” said Shelby Johnson, the president of Theodore Williams Construction. “Little girls don’t even realize they can go into construction.”

Amy Wincko, a senior vice president at Structure Tone, mentioned that she’d faced some resistance from male colleagues who were skeptical and unsure of staffing women on their projects.

When a woman in the audience who had just entered the construction industry asked for advice on how to deal with men in the industry who underestimate her, Johnson was candid. “They’re going to think you’re on the architecture team, and then when you start to talk and they’ll see what you know and this look of horror crosses their face,” the construction exec explained.

“My advice would be exactly what Shelby said, and just let it go,” said panel moderator Sara Kendall, a vice president at Turner Construction. “People will question your confidence every day, whether you’re picking out cereal in the grocery store or looking at a rebar detail.”

The other panelists were Catherine Moss of ADCO Electrical Corporation, Frances Minondo of E.W. Howell and Antonina Caruso of Holt Construction Corp.

On the third panel of the day, developer Toby Moskovits remembered being dismissed when she was working at a venture capital firm in her 20s.

Helen Hwang, a senior managing director and investment sales broker at Meridian Capital Group, recalled how she was underestimated by her colleagues after she started leading her own investment sales team at Cushman & Wakefield.

“There was a time at Cushman when a psychiatrist came in and everyone had to line up and talk about what their biggest complaint about the company was, and everyone stood up and complained about how young and new the capital markets team was,” said Hwang. “And I stood up and said, ‘I’m really proud of where we are and how much we’ve accomplished.’ And after that everyone who spoke said, ‘Our capital markets team is young but look at what they’re doing.’ ”

The final panel revolved around building a career as a woman in commercial real estate finance. It featured Jennifer McLean of Kushner Companies, Karen Ramos of Credit Agricole CIB, Sharmi Sobhan of Chase, Maria Avellaneda of Compass and moderator Kara Parkey of Built Technologies. The closing keynote speaker was supposed to be Department of Design and Construction Commissioner Lorraine Grillo. She couldn’t make it, and Gayle Mandaro, a senior director and counsel at the New York City School Construction Authority, spoke in her stead.

Several awards were handed out at the event, including an award for achievement in tech, which went to Chandra Dhandapani of CBRE; Beth Bailly of Building Conservation Associates and Sara Shank of Beacon Capital Partners.

An award for innovation was given to Carol Rosenthal of the law firm Fried Frank, Kim Roy of HITT and Vicki Schiff of Mosaic Real Estate Investors.

Lastly, there was a “Breaking Barriers” award that went to Leslie Himmel of Himmel + Meringoff, Judith Kunoff of the MTA and Kate Agnew of Natixis.

Update: The story has been updated to remove the reference to Arcaro feeling put-down while working for a female boss, which is inaccurate as Arcaro was not referring to a boss.