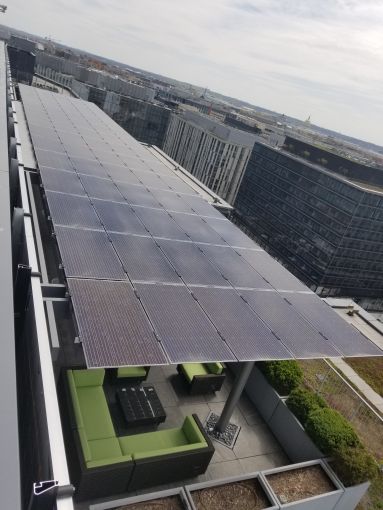 By piloting its rooftop solar project, Oxford is looking to demonstrate the economic benefits of solar energy, as well as the clear environmental benefits, according to Carolyn Abbey, Oxford’s U.S. director of operations for the D.C. Region. The solar program is part of Oxford’s wider pledge to reduce its carbon emissions by 30 percent by 2025.

The setup at 1101 New York Avenue, which is launching tomorrow in partnership with Washington, D.C.-based New Partners Community Solar (NPCS), has a system capacity of 58.8 kilowatts and its energy production is estimated at 69,062 kilowatts per year. It will have 183 solar panels resting on about 3,600 square feet.

The clean renewable energy produced at the site will be donated to low-income households via a monthly credit of up to 50 percent off their monthly electric bills.

The communities benefiting from this are Maycroft Apartments at 1474 Columbia Road NW, sponsored by Jubilee Housing; Copeland Manor at 4740 C Street SE #203, sponsored by the National Housing Trust; and Trinity Plaza at 21 Atlantic Street SW, sponsored by Mission First Housing.

“Oxford is proud to participate in this program which provides energy credits earned from the solar panel’s energy generation to low-income D.C. residents,”  Abbey said.

Oxford also launched one of D.C.’s largest rooftop solar arrays two months ago at Gallery Place, its 482,000-square-foot multi-level, office and retail complex located at the corner of H Street NW and 7th Street NW. That project was also done in partnership with NPCS, a non-profit dedicated to promoting sustainability and supporting low-income communities.

Gallery Place now features 321 solar panels on a 2,200-square-foot vertical array affixed to a screen wall as well as a large solar field. It has a system capacity of 104.4 kilowatts and is estimated to produce 120,201 kilowatts per year.

Oxford has dedicated itself to develop a minimum of 1 million square feet of rooftop solar projects across North America by 2022. Oxford has already completed a project at Yorkdale Shopping Centre in Toronto, with 600 rooftop solar panels installed on 20,000 square feet, generating 230,000 kilowatt-hours of clean electricity per year.

In 2017, Oxford acquired 1101 New York NW, which is recognized as the area’s first ground-up, LEED Gold office building. Designed by Kevin Roche, the building boasts floor-to-ceiling triple-glazed glass and the building’s LEED designation was recently upped from Gold to Platinum.