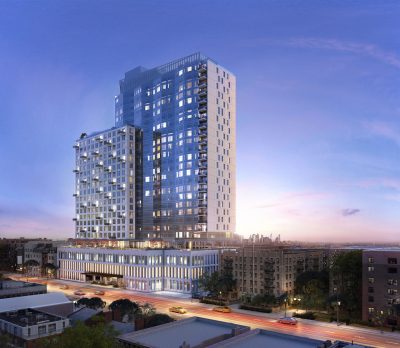 The Friends of Ascend Charter Schools signed a 15-year lease to take the entire retail portion of The Moinian Group and Bushburg Properties’ PLG development at 123 Linden Boulevard between Bedford and Rogers Avenues, according to Moinian Group. A spokeswoman for the landlord declined to provide the asking rent in the deal.

Ascend was founded in 2008 and currently serves 5,000 kindergarten to 12th-grade students in 15 schools around Brooklyn. It became known for its high test scores and moving away from the strict disciplinary codes used by many charter schools and instead creating more forgiving classrooms, Chalkbeat reported.

Last month, its founder and CEO, Steven Wilson, stepped down from his post after writing a controversial blog that discussed race and civil rights, according to Chalkbeat. He was replaced by acting CEO Susan Pollock.

Ascend’s latest campus — dubbed the Lefferts Gardens Ascend Lower School — will occupy the ground and third floor of the 26-story PLG development and open in the fall of 2020, according to Moinian.

“The Moinian Group is pleased to provide Ascend Public Charter Schools with a prime academic space in this dynamic Brooklyn neighborhood,” Joseph Moinian, the founder and CEO of Moinian Group, said in a statement. “We feel confident that this space will provide a high-quality learning environment that meets all the needs of this high-achieving charter network and its students.”

Moinian dropped $160 million to partner with Bushburg on converting a former nursing home at 123 Linden Boulevard into the 487-unit rental PLG development in 2016, as CO previously reported. The project will have studios starting at $2,300 a month and topped out in April, Curbed New York reported.

O’Brien said in a statement that the deal was “a complicated process as the requirements to fit out for a school is an exacting process.”

Update: The story was updated to include a comment from William O’Brien and reflect Davon Peters’ involvement in the deal.