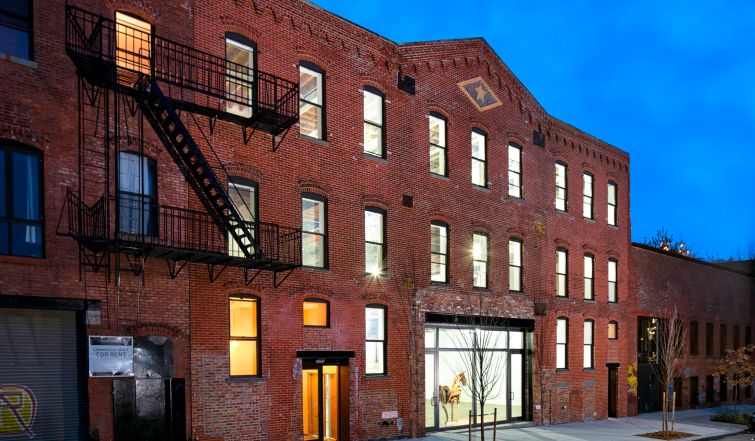 A rendering of 74 Kent Street in Greenpoint. Courtesy: NKF

The loan is backed by an office at 74 Kent Street, between Franklin and West Streets, in Greenpoint and at 11-20 46th Road in Long Island City. Together, the two office buildings total 65,000 square feet.

A Newmark Knight Frank (NKF) team led by Dustin Stolly and Jordan Roeschlaub, the vice chairmen and co-heads of debt and structured finance, along with senior managing director Daniel Fromm brokered the debt on behalf of Caerus.

“[Caerus] has done an incredible job redeveloping and leasing the assets, creating two best-in-class office buildings in the high-growth submarkets of Long Island City and Northern Brooklyn,” Roeschlaub said in prepared remarks. “[The properties’] tenancy will provide reliable and consistent cash flow while mitigating the need for ongoing leasing costs.”

In Long Island City, the four-story property was originally built in 1947 and was repositioned by the company in 2018, CoStar data shows. Educational services firm TheraCare occupies the entire building on a lease that expires in June 2034, according to CoStar Group data.

In Greenpoint, the four-story property — designed by Hustvedt Cutler Architects — is a 111-year-old former Eberhard Pencil Factory that was repositioned to office in 2017, according to information from CoStar.

The building is home to Project Franklin, a retail innovation incubator and subsidiary of Walmart, according to CoStar and confirmed by a source. Project Franklin is part of Walmart’s incubator program called Store No. 8, which has several operations working under a range of covert names, like Code Eight and Project Kepler. In January 2018, Project Franklin was announced, and Bart Stein, the former co-founder and CEO of Wim Yogurt, was tapped to head up the venture.

The Brooklyn property also hosts a branch of New York University Langone Health, which signed a 15-year lease in April last year to take nearly 17,000 square feet across the lower level and the ground floor, with the asking rent in the mid-$50s per square foot, as CO previously reported; NKF brokered that NYU lease arrangement.

“[Our] emphasis on layouts, use of space and location selection continues to play out in 2019,” Caerus senior managing partner Leo Tsimmer said in a prepared statement. “The team saw an opportunity to capitalize on great buildings and locations, and our effort was rewarded with appreciation from credit-rated tenants and quick absorption as a result.”