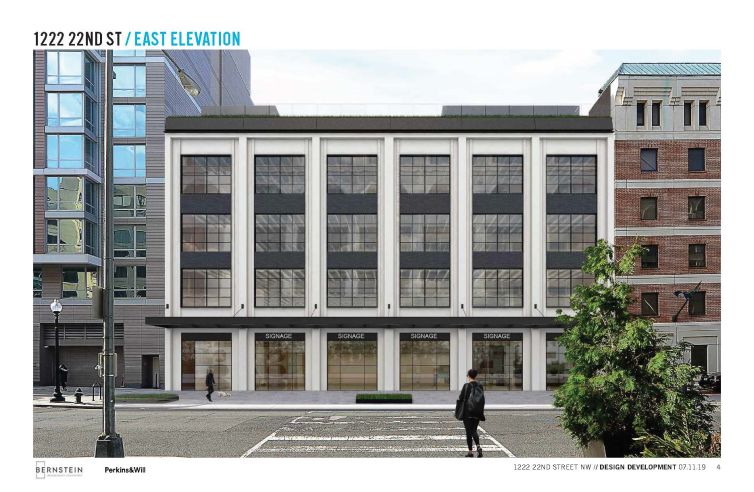 Rendering of 1222 22nd Street Perkins and Will

Perkins and Will will be moving its Washington, D.C., office to 1222 22nd Street NW, a former White House transportation facility that’s undergoing redevelopment into loft office space, according to the company.

The architecture and design firm inked a 10-year deal for 14,317 square feet on the entire second floor. The 58,000-square-foot, five-story property, which is scheduled for delivery in the second quarter of 2020, is owned by Bernstein Management Corporation.

Perkins and Will, which has more than 20 studios worldwide, will be moving its D.C. offices from 1250 24th Street NW, just two blocks away, where it was facing an upcoming July 2020 lease expiration.

“We’ve been in our current space for about nine years, so we looked at what worked well, what things we would change because we work differently than we did 10 years ago,” Laura Vierling, Perkins and Will’s principal, workplace strategist and change practitioner, told Commercial Observer.

The company’s search for space included tours at the Yards and the Wharf, Vierling said. Ultimately, though, the firm was drawn back to its current neighborhood.

“The reasons … that we came to this part of town 10 years ago, a lot of that still made sense,” she said. “It’s between two metros and made sense from where our employees are coming from.”

The firm’s new space at 1222 22nd Street can house up to 85 employees and the firm’s senior members have signed off on a plan to eliminate assigned seating, with workers stashing items in lockers or file cabinets.

The firm sought advice from its entire team on what its new studio should look like, with the team weighing in on things like the library, café and virtual reality space, Vierling said.

In addition to its own space, Perkins and Will is helping to design the renovation of the building’s base. The property will feature high ceilings, warehouse-style windows, and a rooftop terrace.