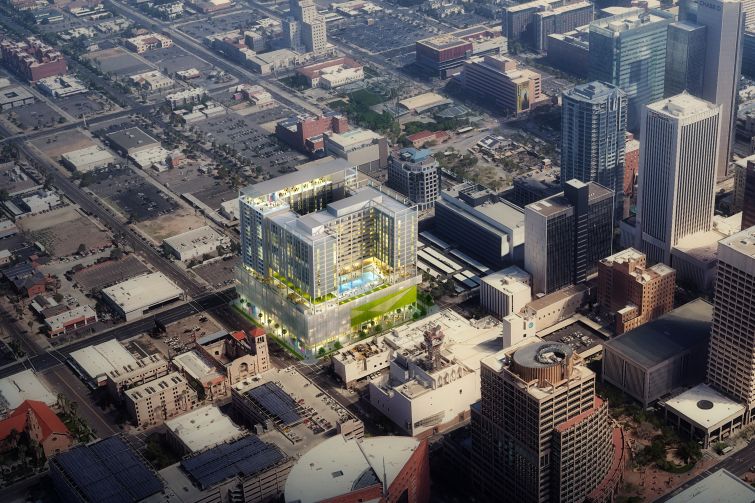 A rendering of 200 West Monroe Street in Phoenix. Image: PMG

The loan, from Los Angeles’ CIM Group, will fund the project by the developer, PMG, to build a 253-unit residential tower at 200 West Monroe Street in the Arizona capital, within the three-block-by-10-block area that comprises the city’s most densely developed section. The project will be the second in a planned series of a new PMG developments aimed at demand for upscale but affordable apartments.

The branding will be aimed at setting the building apart from a previous line of PMG projects, known as X, which Ryan Shear, a PMG managing partner, said had grown to be too much associated with younger renters.

“X is a phenomenal brand, but it got a little bit pigeonholed as targeting millennials,” Shear said. The Phoenix project is part of “a brand that’s a little more inclusive, and we’re really excited about it,” he added.

The project will include a mix of studios and one- and two-bedroom units in addition to co-living options for residents to rent just one bedroom in a shared apartment. Apartments will be smaller than the competition — a one-bedroom might be 550 square feet, instead of the Phoenix market’s more typical 700, Shear said — but PMG plans to make up the difference with an extensive package of amenities.

The building’s lobby will be open to the public as a come-all hangout, with a vibe like the entrance to a trendy hotel, Shear said. There will also be a food hall, a large pool deck, a co-working space, fitness amenities and bike storage.

“A big part of it is that we sell this concept [that] you don’t need another gym or pool membership. You don’t need a coworking membership. This is about market-rate affordability,” Shear said. “Going to your amenity space downstairs, there will be no comparison.”

PMG, which has offices in New York City and Miami, started building a similar project in Fort Lauderdale, Fla. two years ago, and found it difficult at first to bring a lender onboard with the developer’s unorthodox vision.

“Honestly, when we broke ground in Fort Lauderdale, financing was hard,” Shear recalled, noting that lenders weren’t so familiar with co-living concepts at the time. “It was a big building, and was there weren’t a ton of people lining up.”

But broader acceptance of the model made finding debt for the Phoenix project more of a cinch, he added.

“The world got more familiar with it,” Shear said in response to a question about whether obtaining a loan was challenging. “Today, no, but as short as 2 years ago it was a major hurdle,”

The building is scheduled for a 2021 opening. A representative for CIM did not respond to an inquiry.