Office REITs Gauge the Risks and Rewards of Coworking 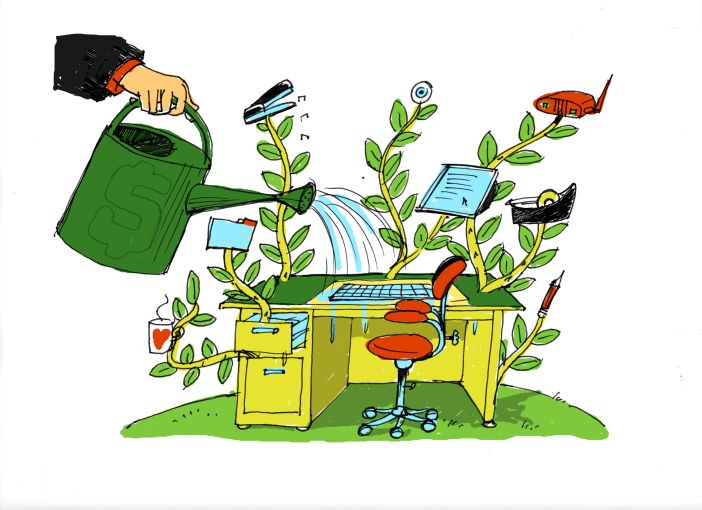 In early 2018, Washington Real Estate Investment Trust acquired a 398,000-square-foot office building in Rosslyn, Va., and got to work converting some of the space for a new co-working venture dubbed Space+.

The spot launched in July 2018, and WashREIT leased 90 percent of the initial 96,000 square feet in 90 days. Leases were structured to be flexible, with terms as short as one month and move-ins within 24 hours of signing the lease. Space+ has since grown to 107 suites, either planned or delivered by late September, in 16 properties across the Washington, D.C., area.

The venture was a direct reaction to the rise of coworking and flex space over the past few years, the company said. The REIT had been experimenting in the sector with some spec leases and decided by 2018 to take the plunge.

“Through our internal research, we were finding that the demand existed not just for the kind of stereotypical coworking space but for flexibility even among enterprise users, and we saw certain designs were much more successful than others,” said Anthony Chang, vice president of acquisitions for WashREIT. “And then we saw a number of technology options in the marketplace, and Space+ was made possible because we combined all of these elements.”

Office REITs are trying to achieve a balance in their approaches to coworking as they — and everyone else — awaits what increasingly feels like an inevitable market correction in the coworking sector, especially following WeWork’s early autumn implosion, which saw it postpone its initial public offering, hand CEO Adam Neumann a $1.7 billion golden parachute, and agree to a takeover by main creditor SoftBank.

By mid-2019, coworking and flex space accounted for just under 2 percent of the total U.S. office inventory, according to a September report from brokerage CBRE. That was after a 34 percent increase over the previous 12 months. The sector, too, barely accounted for any share of nationwide office inventory at the start of the decade.

Office REITs recognize this potential for growth, though they’re also wary of it to a degree. No one quite knows what would happen to the bulk of coworking space in a recession, and WeWork’s parent company recently replaced CEO Adam Neumann and at the end of September postponed WeWork’s initial public offering, sewing doubt about the future of the largest coworking operator.

Still, office REITs since the start of 2018 have become bigger players in the sector.

“I think it’s here to stay,” said Steve Durels, director of leasing and real property at Manhattan-based SL Green Realty. “We have coworking in our portfolio, we’ve been selective about how much exposure we have to the industry.”

SL Green is one of a number of office REITs to turn over at least some of its portfolio to coworking operators, and to begin to adapt the model more in-house. SL Green, for instance, leased the entire 138,563-square-foot office portion of 609 Fifth Avenue to WeWork in late 2018 and leased more than 17,000 square feet in a SoHo property to Knotel around the same time.

Other office REITs that have leased to coworking operators include Boston Properties and Columbia Property Trust. And Macerich, an REIT that deals mostly in retail space, signed a deal in August 2018 with coworking operator Industrious to open office spaces in multiple shopping centers nationwide.

There are plenty of REIT holdouts, however. Most famously perhaps is Empire State Realty Trust, whose holdings include the Empire State Building and whose CEO and chairman, Tony Malkin, warned of the risk to the REIT model that he says coworking presents.

“I have been very clear for years and the world now recognizes that these companies seek to disrupt the relationships amongst tenants, landlords and brokers with outsized risk from weak equity-dependent business models,” Malkin said. “I maintain that landlords, investors and lenders will regret the day they decreased the probability of their future cash flows with the leases they have made with these tenants.”

In the end, it might depend on the size of the REIT involved. Larger ones can more afford the exposure to risk in leasing a relatively small amount of their portfolio to coworking operators, analysts say. SL Green as of late September had more than 20 million square feet overall, so the WeWork lease at 609 Fifth represented roughly 0.007 percent of that square footage. The REIT also has long had its own in-house flex-space wing called Emerge.

“I think it was easier for some of the bigger REITs to just lean on WeWork to handle that while in the process of filling in their nooks and crannies of occupancy, and, a lot of ways, achieving above-market vacancy on their properties and getting higher rents than they normally would without taking on a lot of tenant improvement risk,” said Steve Kurtz, managing director in the valuation and business analytics practice at financial advisory group BDO.

For mid-size and smaller office REITs it becomes a different calculus. That’s who Kurtz and his firm works with mostly.

“They’re not necessarily signing on to large blocks of space with the mainstream coworking companies,” said Kurtz, who added that coworking’s “secret sauce” is in its convenience, including flexible lease terms, and not in its cost savings. “They’re taking lessons from them and saying, ‘we’re going to be more flexible, we’re going to simplify our leases and we’re going to cut down the amount of time it takes to get tenants inside of our space.’ ”

WashREIT, for instance, aims to sign its Space+ tenants to full floors, Chang said, but is fine with smaller footprints if other factors such as location work. “Our median tenant size is less than 5,000 square feet,” he said. “Space+ is really kind of a sweet spot.”

Beyond physical footprints and adopting the coworking model, both larger and smaller office REITs have had to adjust leasing approaches when dealing directly with the operators, analysts say. That’s because the end fiduciary results for REITs and coworking firms are different.

“A non-REIT landlord is generally interested in building cash flow,” Kurtz said, “where REITs are more interested in really building shareholder value. That’s where there’s a real difference between them.”

Building shareholder value — and avoiding the risk that Empire State Realty’s Tony Malkin talked about in 2018 — usually means leasing to and partnering with more established investment-grade tenants. This does not include most coworking chains, and the volatility within WeWork this fall has only furthered coworking’s reputation for disruption — and not necessarily the good sort. (WeWork did not respond to requests for comment.)

To mitigate the risk, analysts say an office REIT should lock in longer term leases with coworking operators just as they do for their more established tenants. Barring that, a kind of revenue-sharing agreement, wherein the coworking operator shares burdens such as build-out costs, would be the route to travel.

“It’s not the old way of doing business, where you have an operator come in and sign a 10- or a 15-year lease and they then parcel that space on a month-to-month or yearly basis through a membership,” said Scott Homa, director of office research at JLL. “It is so capital intensive to be opening all of these locations. Revenue-share can give the operators a bit of a break.”

This approach — as opposed to long-term, conventional leases to the likes of WeWork — might gain in popularity if the coworking sector waffles. As of October, including in the wake of WeWork postponing its IPO, office REITs appear to have adopted a wait-and-see approach.

“The WeWork debacle might make investors hesitant to invest in other coworking ventures as well as the new wave of co-living efforts,” Kurtz said. “However, the problems with WeWork are less about demand for coworking and more about corporate governance and business strategy. WeWork competitors may have a tougher time raising capital, but that doesn’t mean their core value proposition is flawed.”

In the meantime, too, the sector can provide a pipeline for office REITs as freelancers and startups move to larger, more conventional office offices, including within REITs’ own in-house ventures.

Update: An earlier version of this article incorrectly stated that Alexandria Real Estate Equities has leased to co-working operators. It has never done so, but instead runs its own co-working-like venture.