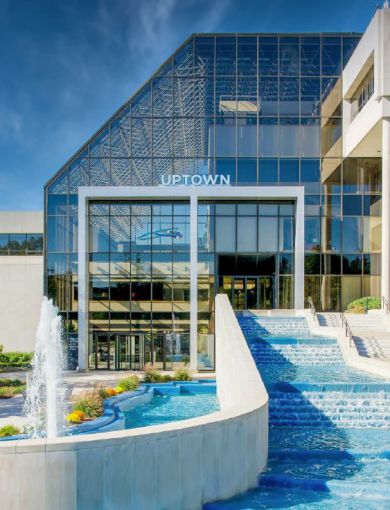 An entrance to APX Morristown in Morristown, N.J. Photo: 3650 REIT

Keystone Property Group has sealed a $66 million mortgage from 3650 REIT to refinance an office complex it owns in Northern New Jersey, the lender announced.

The ten-year, fixed-rate loan refinances a suburban office property called APX Morristown, at 412 Mount Kemble Avenue in Morristown, about 25 miles due west from Lower Manhattan. The five-story building is split into three interlocking wings that each have office space on three levels. There’s also a café, a workout room and a weather-protected parking garage.

Credit Suisse securitized the loan in a recent CMBS deal, CSAIL 2019-C17, according to a Securities and Exchange Commission filing from the Swiss bank. The filing shows that Keystone will pay a 3.69 percent interest rate on the debt, and that it’s structured with interest-only payments for the first six years.

APX Morristown was first built in 1986 as a corporate headquarters for AT&T, but the phone company left in 2004 when Mack-Cali bought the building and positioned it for multi-tenant leasing. Keystone, in turn, took over from Mack-Cali five years ago and has embarked on an extensive renovation program, including a new lobby, elevators and restrooms.

That’s a standard approach for the landlord — a frequent 3650 borrower — according to Ken Dickey, 3650’s head of fixed-rate lending.

“This is the typical Keystone playbook: buying an asset that is more Class B, and upgrading it with a full amenity package,” Dickey said.

It also happened to make a strong fit for 3650’s approach, which sells itself as an alternative for securitized lending in the market for ten-year, fixed-rate debt. 3650’s pledge to remain the loan’s servicer throughout its 10-year life won Keystone over, Dickey said.

The building serves as headquarters for three insurance firms, Berkley Surety Group, New York Marine and General Insurance Company. Louis Berger, a big infrastructure consulting firm, also has its main office in the building. Last year, tenants paid a total of $8.6 million of rent, and the building earned net cash flow of $3.8 million after expenses, according to the SEC filing.

In April, The Real Deal reported that Keystone hired HFF to try to sell APX Morristown for $95 million. An official at Keystone did not immediately respond to an inquiry.