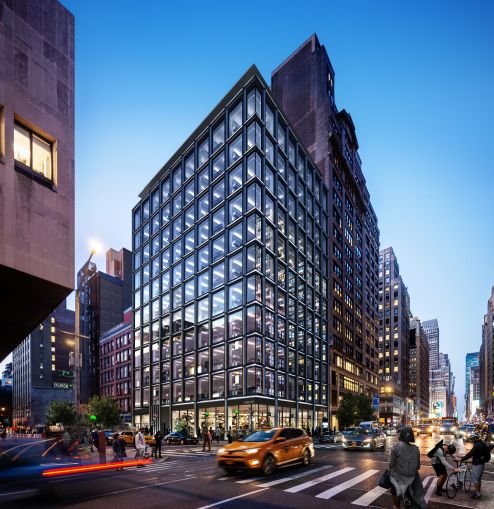 Developer GDSNY and its partner Klovern are breaking ground today on a new 12-story office building at 322-326 Seventh Avenue, at the corner of West 28th Street, the developers announced.

The builders also revealed the first renderings of the building, which was designed by Skidmore, Owings & Merrill. GDS co-founder Michael Kirchmann began his career at SOM and still collaborates with the firm frequently. The facade will consist of a glass grid divided by black, curved terracotta tiles.

The 105,000-square-foot property, dubbed “28 & 7,” will feature large floor-to-ceiling windows, triple-glazed windows and thick insulation, along with secure bike storage, a shower and changing room on the ground floor for employees who bike to work. There will also be a 12th floor penthouse with a shaded, wraparound terrace.

Kirchmann and his partner Alan Rudikoff purchased the site for $36 million last year, according to public records.

The development firm is also working on a 22-story office building at 1241 Broadway in NoMad and a 10-story condominium building at 500 West 25th Street in West Chelsea. And GDS and Klovern recently purchased a site at 118 Tenth Avenue in Chelsea with plans to build a 10-story office project.

The building is “the perfect boutique office building for its neighbourhood. It offers timeless design, flexibility, and abundant amenities in one of the most vibrant areas in the city,” Kirchmann said in a statement.

Construction is expected to be complete in 2021.