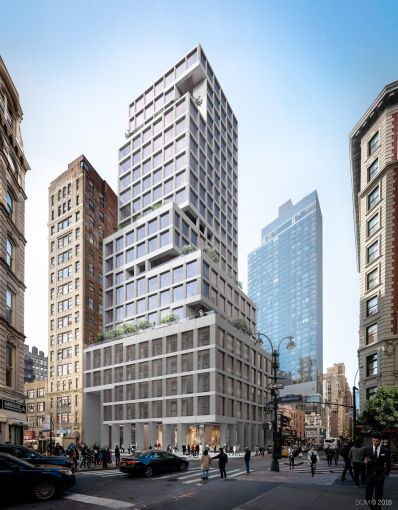 GDS Development is breaking ground on its first new construction office development today, and the firm has given Commercial Observer a look at the 22-story building planned for 1241 Broadway in NoMad.

The firm—led by Michael Kirchmann and Alan Rudikoff—inked a 99-year ground lease for the site between West 31st and West 32nd Streets last year. The site is currently a parking lot owned by Drucker Associates, which has held onto the property since at least the late 1970s, according to public records. GDS is partnering with Swedish property management company Klövern on the project, which will be the latter firm’s first in New York City.

The stepped, concrete building will have terraces for tenants on several floors, 12-foot high ceilings and triple-insulated floor-to-ceiling windows. Office workers will also have access to an amenity lounge with phone booths, communal work areas and a beverage station.

“After many years of careful preparation, we are excited to finally have our first project underway in Manhattan,” said Klövern CEO Rutger Arnhult in prepared remarks. “Our goal is always to deliver exceptional working environments in unparalleled locations. 1241 Broadway allows us to expand that vision to New York City.”

The building will be constructed to LEED silver standards and is expected to be complete at the end of 2020.

“We are excited to be partnering with Klövern to develop a distinctive design at 1241 Broadway, which combines the best in European innovation and workplace sensibility, with iconic American design and ingenuity,” Rudikoff said in a statement.