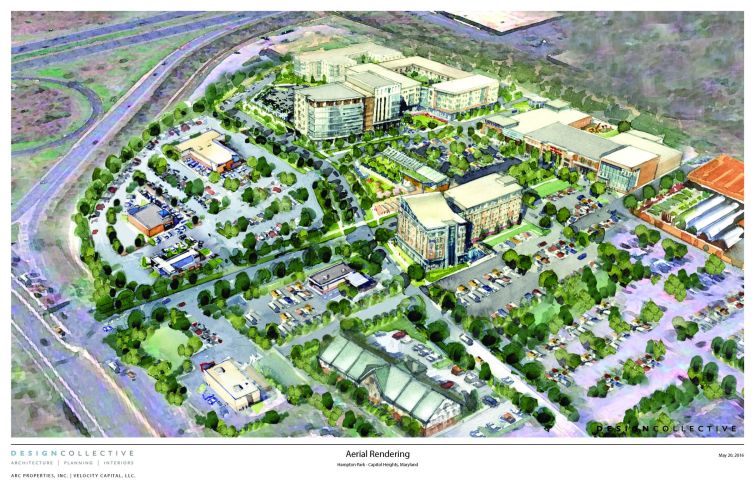 A rendering of Hampton Park Velocity

Velocity and ARCTRUST are developing Hampton Park, a $250 million mixed-used development within an opportunity zone in Capitol Heights, Md., according to the development team.

When finished, the project will be located along the 214/Central Avenue corridor in Prince George’s County, and will include a hotel, a retail district offering 100,000 square feet of retail and restaurants, and a residential district with upscale amenities and interior courts.

The Hampton Park project is leveraging opportunity zone incentives, with the project aiming to revitalize the legacy communities located along the 214 Central Avenue corridor, on approximately 25 acres formerly known as Hampton Mall.

Hampton Park will be divided into two main parcels with subdivisions. The North Parcel is currently occupied with retail buildings leased to Dunkin, iHop, Goodyear, Checkers and Enterprise Rent a Car. ARCTRUST and Velocity are currently working to relocate these tenants so that it can be developed in the near future as a second phase once the South Parcel is in development.

The developers closed on the project this summer after securing $133 million in capital sources to complete the acquisition and start the construction.

Brandon Bellamy, Velocity’s chairman and CEO, told Commercial Observer that the project will break ground on Sept. 27 and construction of the first phase will begin.

“That will consist of a 115,000-square-foot county office building, which will house their health and human services, 200 units of market-rate apartments, a 100-key hotel and 80,000 square feet of retail,” Bellamy said.

Ivy City Smokehouse will also be opening a 5,000-square-foot restaurant, its entry into Maryland.

The development is located near the Capital Beltway and Central Avenue in Maryland.

According to Bellamy, this project works as an opportunity zone because it was a solid real estate deal in a great location, with two metro stations just a mile apart. Plus, it’s perpendicular to I-95, and in the middle of an affluent area in central Prince George’s County.

“Sometimes projects that are on the ‘other side of the Beltway’ have difficulty getting off the launching pad,” he said. “It has all the bones to be a good real estate project, but you need a little more capital to move the deal.”

For example, this project needed structured parking to support the live-work-play concept and that infrastructure wouldn’t have happened if the opportunity zone wasn’t available.

“An opportunity zone can make a good deal better, but it can’t make a bad deal good,” Bellamy said. “When you have a blend of all of this together, it can really do something transformative.”