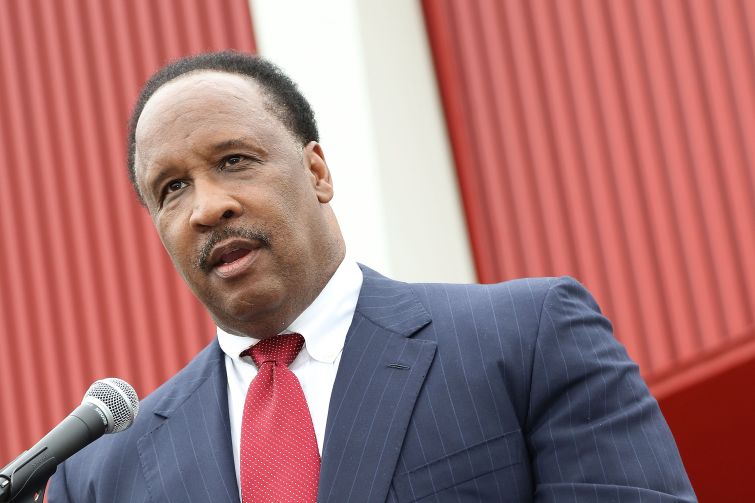 Inglewood, Calif. is on the verge of an economic bonanza. “The only thing that’s changed about Inglewood is everything,” said Mayor James Butts about the city he’s been at the helm of for the last eight years.

The re-imagination of Inglewood, a.k.a. the “Jewel of the South Bay,” began with the remodel of the landmark venue, the Forum, in 2014. By 2020, the city will have a brand new $4.9 billion National Football League stadium built for the Los Angeles Rams and Chargers. Surrounding the new stadium will be Hollywood Park, an ambitious, multi-billon dollar development, spanning approximately 300 acres—all located in the center of the L.A. basin—six miles from the beach and three miles from Los Angeles International Airport.

Built on the land of the former Hollywood Park Racetrack, Hollywood Park was acquired by developers Wilson Meany and Stockridge in 2005. The new $4.9 billion project will offer an entertainment and commercial district, 620,000 square feet of retail space, the recently completed Hollywood Casino, an arena for the Clippers, a space designed by famed architect Frank Gehry for the Los Angeles Philharmonic’s Youth Orchestra Los Angeles, a 300-room hotel, 12-miles of walkable paths, two lakes, a waterfall, 2,500 new homes, the corporate offices of the Girl Scouts of America, and will host the 2028 Summer Olympics. Architecture firms Gensler, BCV Architecture + Interiors, Architects Orange, and Hart Howerton are all part of the massive team working to design the complex.

So, as literally billions of dollars in new development flood into Inglewood, Butts could not be more proud. Commercial Observer spoke with the retired police chief by phone from his office in the heart of Inglewood. The 12th Mayor elected talked about his city, the perceptions people have about it and what makes him most proud.

Commercial Observer: Talk about your personal history with Inglewood.

James Butts: I saw my first concert at the Forum in 1969. It was Sly and the Family Stone, and then Carol King after that. I was 16 years old. During that time we had the Forum, with concerts, the Kings, the Lakers and we had the racetrack for 75 years before it closed down. I joined the Inglewood Police Department in 1972, worked up to deputy police chief, and then left in 1991 to become chief of police for the City of Santa Monica. I was there for 15 years. I returned [to Inglewood] as the mayor in 2011.

The only thing left when I came back was a Sizzler and [Randy’s Donuts].

In 1999, the Lakers and the Kings departed for Staples Center, taking ticket tax, parking tax and sales tax revenues with them. In 2000, the Horse Racing Board allowed off-track betting. So, you didn’t need to be at the Hollywood Race Track to bet your favorite horse. Crowds dwindled to less than 1,000 from an average of 43,000 six days a week. In 2007, you had the recession, and in 2008 property values in Inglewood plummeted.

Additionally, in 2008, the city extended a lifetime retiree medical program, but didn’t set aside money for the extension of the program or require employees to do so. Rather than cut this program and authorize no raises, the city granted a package of raises for three consecutive years and sold assets budgeted for capital improvements to balance the budget and steadily drained reserves. I inherited the city with $11 million in savings and an $18 million structural deficit.

While the Forum was under construction I talked to the Raiders and then in 2014, to the Rams. In the end the Rams’ owners chose to build a stadium.

What Inglewood has done and put on the drawing board for the next few years is matched only by three cities—New York, San Francisco, and Los Angeles, but it took them a generation. We’ve cut our unemployment in half since I took office. Unemployment was 15.3 percent in 2011 and today it’s 5.1 is percent, according to Civicdashboards.com.

At the same time, we’ve maintained our record of having more affordable housing units per capita than anywhere in the South Bay, and our rents are on average the lowest in the South Bay and LA. We’re currently setting aside 190 affordable units within three residential building projects. [The average cost of a home in Inglewood was $266,000 in 2011 and is $520,000 today, per Zillow.]

Given the financial struggles of the city, how did you manage to convince investors to dive into Inglewood?

No one was interested in Inglewood when I got here. When I became mayor my friends said, “We’re glad you’re mayor, but it’s too bad it’s in Inglewood.”

I have an MBA from [California Polytechnic State University]. I’ve made smart moves, and smart deals. We have a City Council that is not self-oriented, but there for the long vision. We have a very mature, team-oriented council. I work as the quarterback. I understand the concept of win-win, and I believe that’s why we’ve done well negotiating with our partners. Political instability translates into economic insecurity, and investors will shy away.

How do you combat the perception that Inglewood is unsafe? Does that perception interfere with investments?

[I was] in law enforcement for 37 years. My police background gives me a sense of urgency. I understand how to make things safe and I combine safety with business acumen. I’ve met a lot of people, and seen what happened to Inglewood when entertainment went away, and I saw what happened to Santa Monica when the Third Street Promenade got going. We got the homeless situation there handled. Cut the crime rate by 64 percent. We’re in our eighth consecutive year of the lowest crime rate in the history of the city—70 percent less than in 1981, our lowest year last year at 14 homicides. We’ve cut crime dramatically, dismantled gangs and are aggressively changing the crime profile of the city. The NFL, NBA, Madison Square Garden, the Hollywood Park Casino, they don’t have that perception. People who have that perception live under a rock. The Olympics are coming here for God’s sake. When the Girl Scouts of America are relocating from Marina del Rey to Inglewood that tells you the city is perceived as pretty safe.

If the numbers are what they are, where do you think the perception comes from?

All these projects don’t cost the city a dime. And when you do [development] that [way], you make economic enemies. It’s big money, and it makes people who’re used to having the money flow the way they want it to flow, mad. How could this be happening there? But, we’re going to maintain our sense of self-determination.

In all of the development, what are you personally most proud of?

When I came back to Inglewood, I would overhear employees and residents answer the question about where they lived by saying, “South of Culver City,” or “right next to Westchester,” or “not far from the airport,” or “close to Hawthorne,” because if you said you worked or lived in Inglewood, you were met with condescension, because it was deemed an unsafe place. And everybody thought of the Ice Cube song “Ghetto Bird.” With the lyrics, “Why, oh why, must you swoop through the ‘hood like everybody from the ‘hood is up to no good?” So, my legacy will be that when you ask people where they live, they’ll proudly say, “I live in Inglewood, Calif.”