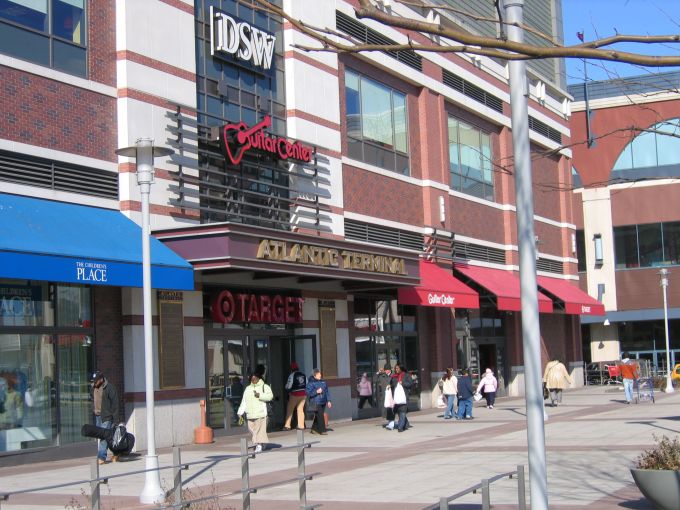 Atlantic Terminal Mall in Brooklyn, where Sephora will be taking over the former Children's Place location. Credit: J.reed at English Wikipedia.

The multi-story shopping center located across from Barclays Center in Brooklyn has landed a Sephora.

The seller of Urban Decay eyeshadows and Dior perfumes will take 5,500 square feet on the ground level of Atlantic Terminal Mall, located at 139 Flatbush Avenue at the intersection of Atlantic Avenue, according to information from landlord Madison International Realty. Sephora signed a long-term lease with asking rents at the center at $250 per square foot, a spokeswoman for Madison said. It plans to open the space next month.

The retailer was drawn by “the incredible foot traffic, the density of the area, and how it’s changed over the past few years with the addition of Barclays,” said Brandon Singer, an executive director at Cushman & Wakefield, who represented the landlord in the deal. He noted that Madison, which acquired the mall as part of a 15-property New York City retail portfolio from Forest City Realty Trust, has been working to reposition the asset and freshen up the tenant mix.

Sephora will be taking space that was vacated by kids clothing store, The Children’s Place, and will be joining other retailers at the center including Target, Chuck E. Cheese and Uniqlo. The center is connected to its neighboring building, the Madison-owned Atlantic Center, via an enclosed walkway where shops include Marshalls, Stop & Shop and Burlington Coat Factory.

The property sits on top of the Atlantic Avenue-Barclays Center station, which houses nine subway lines and a connection to the Long Island Rail Road, and ranked as the busiest Brooklyn subway stop last year, according to MTA data.

“The new Sephora store will both serve the neighborhood and the many visitors who come to Barclays Center for sporting events and concerts,” said Evan Walke, portfolio manager at Madison, in prepared remarks.

The team representing Madison at C&W also included Ian Lerner, Alan Schmerzler and Diana Boutross. Sephora was represented by Virginia Pittarelli of Crown Retail Advisors. Pittarelli did not immediately respond to a request for comment.