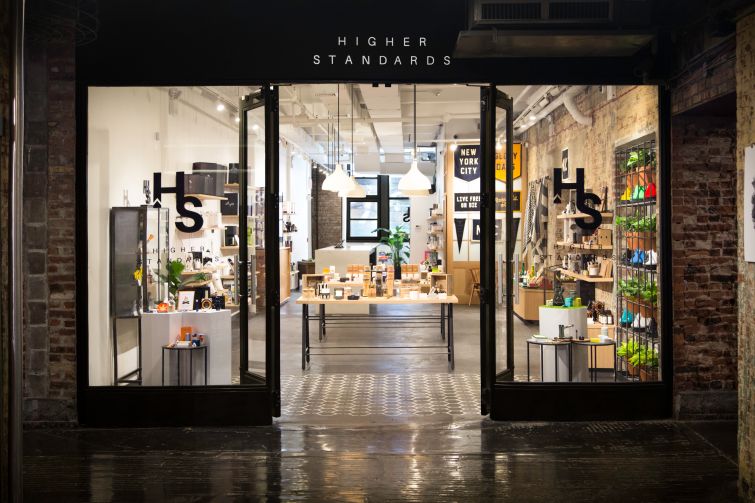 Major owner and developer Jamestown has entered into the cannabis boom.

The company has struck a tenant representation agreement with publicly traded cannabis accessory, CBD and liquid nicotine company Greenlane Holdings for the U.S. expansion of its luxury head shop brand, Higher Standards, according to an announcement late last week by Greenlane.

“We are excited to have partnered with Higher Standards to incubate and accelerate their movement into the direct retail business,” Jamestown president Michael Phillips said in a prepared statement. “[We’re] partnering with them in a tenant advisory capacity to help them expand their retail footprint.”

Higher Standards opened its first location in New York’s Chelsea Market in December 2017 and its second shop in Atlanta at Jamestown’s Ponce City Market at 675 Ponce De Leon Avenue Northeast in March this year. Jamestown collaborated with Greenlane on the location, design and development of these first two stores.

Greenlane is expecting to have four Higher Standards locations in North America by the end of the year, according to information from the firm, and it is targeting further expansion abroad.

The shop offers luxury cannabis and smoking accessories — such as $10 glass slides, or “bowls,” that hold the smoking material in bongs and $60 glass ashtrays — and smokeware — hemp wraps for rolling as well as glassware, such as a $300 limited edition glass smoking “rig,” a $160 glass bong, or “beaker,” as it’s called on its website — as well as cleaning kits and lifestyle products and apparel. Its website says it was “created to provide aficionados with the tools they need for the most elevated smoking experience.”

“Jamestown has been instrumental in establishing our Higher Standards flagship locations and we are excited to extend our partnership as we bring this concept to more connoisseurs throughout North America,” Sasha Kadey, CMO of Greenlane and the co-founder of Higher Standards, said in prepared remarks. “With Jamestown’s proven track record of investing in strong retail markets across the country, we are poised for accelerated, strategic growth.”

The company is planning more “shop-in-shop” collaborations — spaces that a host retailer dedicates to other, specific brands — with retailers “whose high level of style and contemporary taste align with the Higher Standards brand,” according to information from Greenlane.

The retailer has two such “shop-in-shop” stores in Los Angeles at dispensary The Pottery — at 5042 Venice Boulevard — and cannabis store Cannary West — at 2435 Military Avenue. It’s got another such concept store at Bud and Bloom, a pop-up cannabis shop located at 1327 East St. Gertrude Place in Santa Ana, Calif.

On Sept. 9, Greenlane announced that it had partnered with Paris-based fashion retailer NOUS, which was founded last year, to take the Higher Standards “shop-in-shop” concepts to Europe. The first Higher Standards pop-up is slated to open at NOUS’ Paris boutique shop in the fourth quarter.

Jamestown joins a relatively small wave of property owners and developers who are dipping their toes into the waters of the cannabis sector.

As for Boca Raton, Fla.-based Greenlane, the company listed in the U.S. market in April, debuting at $17 per share on the NASDAQ exchange and raising $102 million through its IPO. Since then, its stock has plunged about 81 percent to $3.98 at market close on Sept. 16, after closing its first day on April 18 at $21.10.

This follows the negative trend for U.S.-listed cannabis companies starting just before Greenlane’s IPO in April. The U.S. marijuana index — which tracks publicly traded cannabis companies whose market capitalization is at least $200 million, with daily trading volume of $2 million, across several U.S. market indices — experienced a rally in the first three months of this year, climbing by just under 43 percent from Jan. 2 through its peak on April 3. Since then, it’s retreated by 41 percent as of Sept. 17. (Greenlane’s market cap is around $155 million, according to most recent information from its NASDAQ listing.)

Officials at Jamestown were not available to comment beyond a prepared statement.