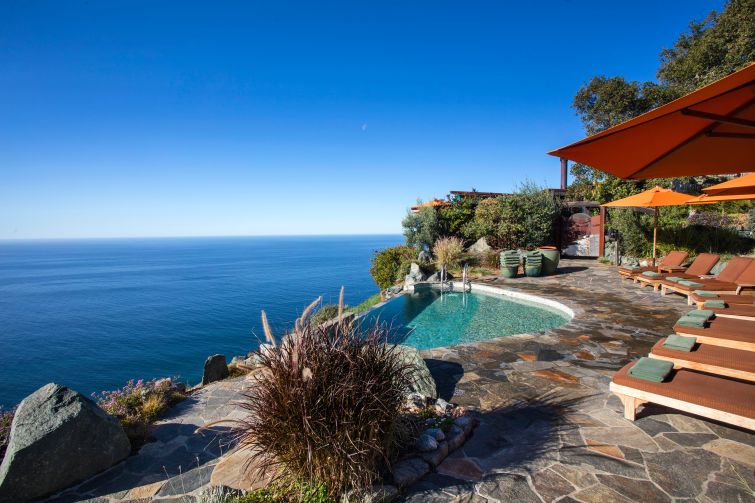 An infinity edge pool and the view from the resort. Image: Sonnenblick-Eichner Company

Deutsche Bank has provided $60 million to Passport Resorts to refinance previous debt on Post Ranch Inn, a popular destination luxury resort situated on the cliffs of Big Sur, Calif., according to Trepp data.

The 10-year, non-recourse loan is interest only and has a fixed-rate of 3.29 percent, according to commercial mortgage-backed securities (CMBS) data from Trepp.

Brokerage Sonnenblick-Eichner Company arranged the first mortgage loan, as per an announcement today. The firm declined to provide details on the loan amount or the lender.

“The Post Ranch Inn is a one-of-a-kind asset,” Elliot Eichner, a principal of Sonnenblick-Eichner, said in a prepared statement. “We were able to create a competitive environment, resulting in multiple financing quotes at credit spreads less than 120 basis points, as well as negotiating an advantageous floor on the 10-year swap rate allowing for a continued reduction in rate as interest rates declined.”

The debt was securitized in the roughly $1.3 billion Citigroup-led CGCMT 2019-GC41 CMBS transaction, representing six percent of the total balance, which closed on Aug. 20. The loan carries a loan-to-value of 42.3 percent, indicating an underwritten valuation at just under $142 million.

“We received 17 financing quotes from lending sources including life insurance companies and Wall Street investment banks,” Sonnenblick-Eichner principal Patrick Brown said in prepared remarks. The deal took out a $50 million, maturing CMBS loan from Deutsche Bank that Sonnenblick-Eichner also arranged in 2014, according to a statement from Brown.

Established in 1992 and last renovated in 2018, according to Trepp, Post Ranch Inn — at 47900 Highway 1 — is a 39-room, full-service luxury resort situated on 90 acres, 1,200 feet above sea level and overlooking the Pacific Ocean from the cliffs of Big Sur, which line the area located on California’s central coast.

The property features 39 guest rooms across 27 buildings. Amenities include a full-service spa, two heated “cliff-top infinity-edge” pools, an outdoor heated lap pool, guided hiking, yoga and meditation areas, a fitness center and award-winning restaurant, Sierra Mar, according to information from Sonnenblick-Eichner and the resort’s website. It also includes organized stargazing and Lexus vehicles reserved for guest use, according to the resort’s website.

Officials at Deutsche Bank declined to comment on the deal. Officials at Passport Resorts were not immediately available to answer an inquiry.