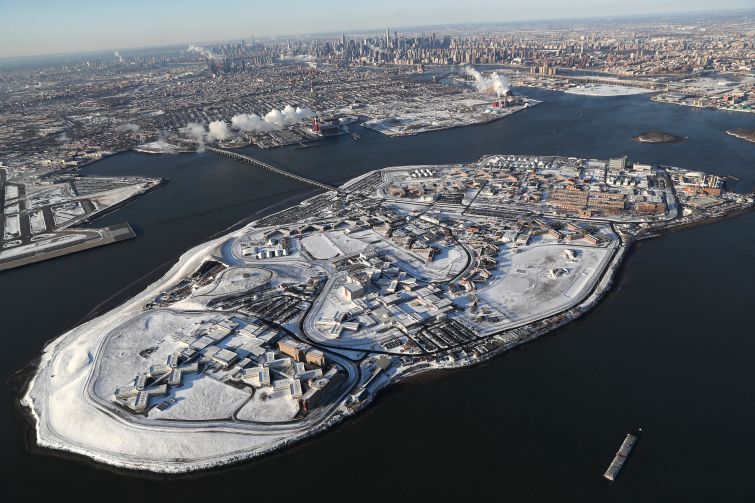 The City Council held its first and only public hearing on the de Blasio administration’s plan to shutter Rikers Island and build four borough-based jails on Thursday, and councilmembers, politicians and community members lined up to criticize what they deemed a deeply flawed plan.

SEE ALSO: A Boutique Office Tower Rises in the Village

Councilmembers questioned the locations, scale and construction of the proposed jails, as well as the timeline for shuttering the current ones. The marathon 10-hour hearing marked one of the final steps in the public review process for the proposal to build a new jail in each borough except Staten Island while slowly shuttering the 11 jails on Rikers Island. The City Planning Commission voted to approve the four jails on Tuesday, and the full City Council must approve the plan for it to go forward.

Each new facility would hold 1,150 prisoners, and the city hopes to reduce its daily jail population from 7,300 to 4,000 by the time Rikers is shuttered in 2026. Construction of the new lockups is expected to cost a whopping $8.7 billion.

Councilman Rafael Salamanca, whose district abuts the site of the new Bronx jail in Port Morris, pressed city officials on when they were planning to shutter the Vernon C. Bain Correctional Center, otherwise known as “The Boat,” an 800-bed jail barge anchored near Hunts Point in the Bronx. It was originally delivered in 1992 to operate as a temporary extension of Rikers when the city jail population had hit an all-time high, but it has persisted through the years.

Officials from the Mayor’s Office of Criminal Justice and the Department of Corrections couldn’t commit to a timeline to shutter the barge, which they claimed was one of only two fully air-conditioned detention facilities in the Bronx (along with one on Rikers Island).

“A 10-year plan to shut down the barge is irresponsible,” Salamanca replied in frustration.

“The site behind the Bronx Criminal Courthouse would have allowed for a much larger building,” said Councilmember Diana Ayala, whose district includes a portion of the proposed jail site. A representative from the Department of Corrections acknowledged the courthouse parcel could have allowed for a 500-foot-tall development, versus the planned 245-foot-tall jail planned on Concord Avenue.

“The tow pound is situated in the poorest congressional district, and it has the lowest levels of investment I’ve ever witnessed,” Ayala explained. “I’ve asked the Council to take a holistic look at this and what the impact of a facility like this would be on Mott Haven and the surrounding neighborhoods. I’ve asked for a series of investments in the neighborhood.”

South Bronx Councilwoman Vanessa Gibson voiced similar concerns about the location of the Bronx jail, joining Ayala in wondering why the city had chosen the tow pound rather than the lot behind the Bronx court buildings in Melrose. Dana Kaplan of the Mayor’s Office of Criminal Justice replied that the lots behind the courthouses couldn’t be used because they were too small and not contiguous.

Karen Koslowitz, who reps the proposed Kew Gardens jail site as part of her central Queens district, also slammed the height of the proposed 27-story jail at 126-02 82nd Avenue as “absolutely unacceptable.”

As for Brooklyn, Councilman Stephen Levin asked why the proposed replacement for the Brooklyn House of Detention at 275 Atlantic Avenue in Downtown Brooklyn was denser and taller than the jails planned for the other three boroughs. A rep from the Mayor’s Office of Operations replied that the Atlantic Avenue parcel was smaller than the ones in the other boroughs, which meant the city would need to construct a taller building to accommodate the inmate programming it hoped to include.

The new jail’s 292-car parking garage will “address the issue of staff parking in the street,” said Kaplan. Cynthia Brann, the commissioner of the Department of Correction, replied that her agency revokes the placards of officers who repeatedly park illegally when they are made aware of the issue.

And Councilmember Margaret Chin criticized the city’s proposed location for the new Manhattan jail, which would replace the current Manhattan Detention Complex at 125 White Street. There are elderly seniors in the 88-unit Chung Pak senior building next door who were at risk during demolition and construction, she argued.

“How do we protect the seniors and their caregivers from the noise, from the dust, from the traffic during construction?” asked Chin. Jamie Torres Springer, a deputy commissioner for the Department of Design and Construction, replied that the city would have on-site traffic and noise monitors and said his agency “intend[s] to have full-time, 24/7 community construction liasons for each of the four facility constructions for the council and members of the community to call anytime with questions and complaints.”

Despite all the backlash, New York State’s former chief judge Jonathan Lippmann came to remind everyone that Rikers could not be closed unless the new jails were approved.

“We’re at a crossroads critical to the future of New York City,” said Lippmann, as anti-jail crowds in the City Council chambers began to boo. “Will we close this horrible place forever, or will these shameful jails continue to harm New Yorkers for decades to come? There is no path to closing Rikers that does not include borough-based facilities. You can argue the height, the location and all these things. But you cannot reject this plan.”