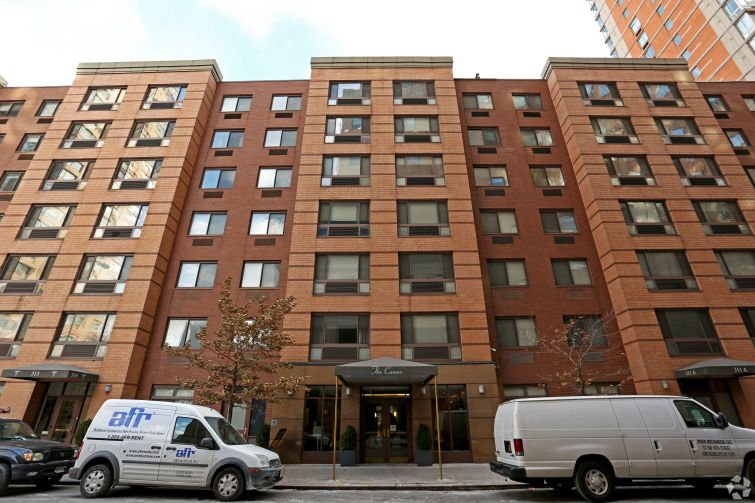 A Hell’s Kitchen apartment building has pulled in a $43 million mortgage from AIG, according to property records.

The seven-story building, known as The Cameo, went up in 2001 at 311 West 50th Street, between Eighth and Ninth Avenues. The debt deal replaces the outstanding portion of a $42 million financing from BankUnited that closed in 2015, and also adds $2.2 million in debt in the form of a new mortgage.

Representatives for AIG and for the building’s owner, The Torkian Group, did not immediately respond to inquiries. Aaron Birnbaum and Carol Shelby of Meridian Capital Group were responsible for arranging the debt, a spokesman for the company said.

It’s no skyscraper, but the building is broad for a mid-sized New York apartment building: It takes up about a quarter of the long block between the avenues and has 14 apartments per floor. An underground garage for residents has 50 parking spots, and there’s also a gym and private garden for building denizens. Built by Douglaston Development, the building sold to Torkian for $72 million in 2015, a deal Torkian financed with the BankUnited debt that the AIG loan replaces.

Last week, someone finalized a deal to rent a one-bedroom apartment in the building for $4,150 per month, according to StreetEasy. Also in July, a studio came off the market for $3,125 per month, and in June, a three-bedroom unit went for $5,795.

Torkian also turned to AIG for a loan in January, when the multinational insurer gave the developer a $135 million debt package for a building Torkian recently developed on West 33rd Street, The Solari. The loan in that case replaced financing from Bank Leumi that had funded the new luxury tower’s construction.

Starting in January, the building was enmeshed in a City of New York lawsuit alleging that units in some Torkian buildings, including The Cameo, were listed as short-term lodgings. In May, Torkian reached a deal to pay the city around $300,000 to settle its role in the claims. Litigation against other parties alleged to be involved in the scheme, including a broker and an accountant, appears to still be underway.

Update: This story has been edited to include information about the settlement between Torkian and the City of New York.