The World Is Your Office 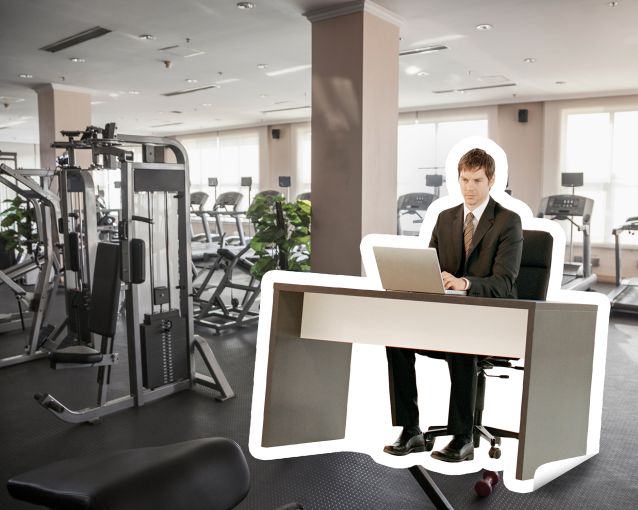 Most office jobs these days require nothing more than a laptop, Slack, and killer inbox-zero skills. Desktops are dinosaurs. Human contact is optional.

To landlords, this offers the exciting prospect of hordes of office-less millennials roaming around with never-ending work to do and nowhere quiet to do it.

Which is why we’re seeing every asset class transform into coworking, and everything from churches to schools to gyms to malls dedicating space for work. For some, it’s a part of their core business model; for others, it’s a gateway space that attracts foot traffic, anchors a community, and provides an excuse to say “community” a lot.

The trend of integrating coworking into non-office spaces has been steadily growing in asset classes like retail and hospitality.  A 2018 report from JLL predicted that flexspace in retail will grow 25 percent per year, resulting in 3.4 million square feet of such hybrids by 2023.

In hospitality, the trend began with expanded lobbies that double as cafes and are open to communities. Ace Hotel is best known as the prototype of the lobby-cum-workspace, but many other hotels have joined in. Examples include Ian Schrager’s Public on the Lower East Side, and Moxy in Times Square, both of which offer food options in communal areas and encourage guests and community members alike to eat, work and hibernate.

Flexspace provider Industrious is a growing player in this space, specifically looking to grow its presence in shopping centers in order to offer a “live-work-play” option in exurban locations like Scottsdale, Arizona and Glendale, California.

“The integration of work into different space types is a powerful proposition in New York or San Francisco,” said Industrious co-founder and CEO Jamie Hodari. “But I think it’s a particularly powerful proposition in Kansas City.” Or Atlanta. Or in any suburban area, where workplace culture is changing just as quickly towards a more fluid work-to-life muddle, but there aren’t 80 restaurants in walking distance of the office.

And the concept is only beginning to heat up. “There’s almost a race right now among the large hotel brands to create a new fused hotel-plus-workplace product,” Hodari said. The expanded lobby is version one, he said, and version two will be “a combination of real deep productive workspace for business travelers staying at the hotel; the option to have a private office for the day, spaces to have meetings.”

In addition to their retail strategy, Industrious announced a partnership with fitness chain Equinox earlier this year, with plans to create a gym-plus-workspace product, starting at New York’s Hudson Yards. The plan is not so much targeted to the single telecommuter in need of a post-workout lull, said Hodari, but to offer businesses an integrated work-and-wellness environment for their employees. At an Equinox office, the tech team can host a weekly game of horse against the marketing team, or a Peloton race with the startup across the hall.

“These things can sound fluffy,” said Hodari. “It’s really not fluffy. That’s where you’re living your life; that’s where you spend 10 hours a day.”

While these models evolve, there are also many unrelated businesses that offer coworking for reasons other than just profit.

At Showfields, a re-imagined department store for the Instagram century, the fourth floor of its Soho store is a free coworking space that doubles as an event space after hours.

Showfields showcases emerging digital brands that are often trying out a physical space for the first time. “We really believe it’s the age of the creator,” said Katie Hunt, a Showfields co-founder. “But it’s really challenging for those companies to set up in a physical way, because it’s a set of skills that’s not the same as running a digital company.”

The coworking is an extension of Showfields’ mission, Hunt said. “Coworking was a really natural way to use that fourth floor, for creators in the community,” she said. “My favorite thing is watching founders from different Showfields brands sit down next to each other and plan a giveaway together or a partnership.”

The idea of free real estate in New York sounds fanciful, but Hunt said they make their money on renting the space out in the evenings.

Once we step out of the office model, the shared workspace can mean a dizzying array of things, from public libraries (the original, authentic coworking space) to incubators, to private clubs like Soho Works from Soho House, to nonprofit centers like the city-supported Freelancer Hub, which is a free coworking space for freelancers inside the Made in NY Media Center in Dumbo.

While flex workspaces are mushrooming everywhere, the supply is barely able to meet demand, according to several industry reports. Flex space makes up 5 percent of office space nationwide, a number that will rise to 30 percent by 2030, according to a 2019 report from JLL.

That’s because the number of remote workers and freelancers is expected to rise, as well as corporate workers who make use of flexible space. It’s also because businesses are outsourcing their office needs to managed workspaces, said Hodari.

“Every Fortune 500 company, every growing Silicon Valley company, every midsize national PR firm, is ending their experimental era, and saying they want to programmatically put 20 to 30 percent of their workplace portfolio in a shared workplace setting,” Hodari said.

The office of the future is not just here — it’s everywhere.