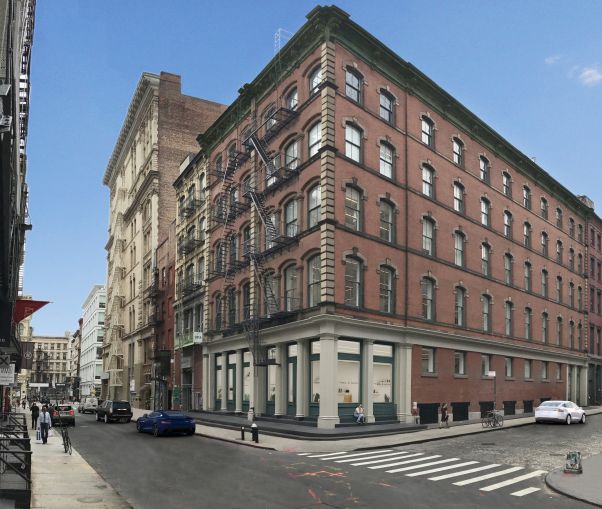 The fashion designer signed a more than five-year lease for the entire 7,500-square-foot third floor of 2 Crosby Street between Howard and Grand Streets, according to owners K Property Group (KPG) and Intercontinental Real Estate Corporation. Asking rents in the property range from $95 to $125 per square feet.

KPG and Intercontinental bought 2 Crosby Street and the attached 30 Howard Street from the Putnam Rolling Ladder Company last year for $46 million, with the plans to combine the two properties into one commercial building to be dubbed Howard X Crosby. When construction finished in the first quarter of next year, the property the six-story property will have 45,000 square feet of space including a three-floor penthouse with an outdoor terrace, the owners said.

“Everything we’ve planned for the building is in line with the look and feel of the neighborhood,” Gregory Kraut, a managing partner at KPG, said in a statement. “We have something special planned for the office interiors, which will be transformed into high-end, bespoke prebuilt suites that are a cut above even the poshest standards of the location.”

Rick Owens — which also has a retail space at 30 Howard Street — has been in a 3,750-square-foot office on the fifth floor of 2 Crosby Street for more than a decade and plans to move into its new digs once construction completes.

“We are thrilled to have Rick Owens expand in our building,” Peter Palandjian, the chairman and CEO of Intercontinental, said in a statement. “Rick Owens is an icon in the fashion and design industry, and they understood our plans to create a mix of high-end form and function.”

“Rick Owens welcomed the opportunity to grow within the building,” Stange said in a statement. “The expanded and updated showrooms and offices will greatly enhance Rick Owen’s New York presence and U.S. operations.”