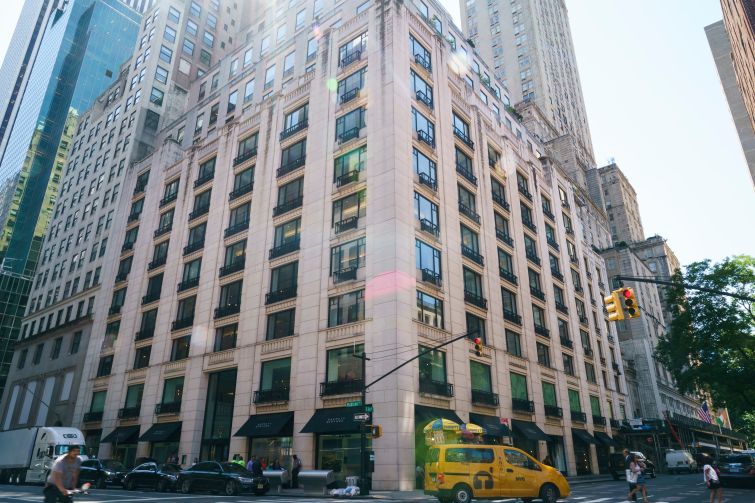 Storied retailer Barneys New York became the latest department store to fall prey to the so-called “retail apocalypse” when it filed for bankruptcy protection on Tuesday.

The struggling clothier has more than $100 million in debt and announced plans to close 15 stores around the country — including its Brooklyn outpost at 194 Atlantic Avenue — with only five set to stay open, the company said. It has also secured $75 million in new capital as it looks for a buyer.

Aside from the struggling retail climate, Barneys was hit with a rent hike at its 660 Madison Avenue flagship which jumped from $16 million a year to $30 million.

“Like many in our industry, Barneys New York’s financial position has been dramatically impacted by the challenging retail environment and rent structures that are excessively high relative to market demand,” Daniella Vitale, Barneys CEO and president, said in a statement. “In response to these obstacles, the Barneys New York board and management team have taken decisive action by entering into a court-supervised process, which will provide the company the necessary tools to conduct a sale process, review our current leases and optimize our operations.”

The retailer takes up 264,498 square feet of space at 660 Madison Avenue across nine floors plus basement space, according to loan documents. In 2010, the retailer’s triple net lease was estimated to average about $97 per square foot inclusive of operating expenses and real estate taxes.

With other luxury retailers closing up shop nearby — including Henri Bendel, Lord & Taylor and Tommy Hilfiger — some have questioned landlord Ashkenazy Acquisition Corporation’s decision to ask for such a dramatic price increase (originally $60 million) with so much vacant space nearby.

“It was an aggressive number,” said Robin Abrams, a vice chairman at brokerage Compass. “Madison Avenue has gone through a lot of ups and downs and the rents have been extremely aggressive and price pretty high a couple of years ago and are coming down and seem to be stabilizing [elsewhere.]”

Rents have been falling in Madison Avenue for the past several years, with the average asking rent for ground-floor retail rents falling by 25 percent to $1,039 in the spring compared to the same time last year, according to a Real Estate Board of New York report. (Brokers said rents for higher floors tended to be cheaper.)

But it’s been hard to pin down exactly why Ashkenazy — who did not respond to a request for comment for the story — sought such an aggressive price. It doesn’t seem to come from trouble with its loan on the retail condominium.

In 2001, Ashkenazy bought the retail portion of 660 Madison Avenue for $135 million from Japan-based Isetan Corp., the New York Post reported.

Ashkenazy is facing a debt maturity next July on a $79.6 million mortgage on the nine-story retail space, according to data from Trepp. The loan was originated in 2010, when the asset was valued at $222 million, and has been paid down from a balance of $100 million.

The property is not highly-levered and, with or without Barneys, it’s likely that Ashkenazy will be able to repay the mortgage, according to Mike Brotschol, senior director at Kroll Bond Rating Agency.

“We think there’s sufficient property value where the borrower will ultimately be able to refinance,” he said. He pointed to a value of $180 million for the property should it go vacant, a so-called dark value, which makes it likely the debt could secure a refinancing or, if needed, an extension.

With that hurdle out of the way, the bigger question is what Ashkenazy plans to do with the space.

Barneys’ logs about one-third of its sales from the Madison Avenue store, The New York Times reported, which helps explain why it’s dug in its heels there while departing from other locations. The retailer started an arbitration process last year arguing its rent should stay the same because of the struggling retail market, the Post reported. However, a judge ruled in August 2018 that Ashkenazy could raise the rent to $30 million.

With the bankruptcy case, Barneys can’t renegotiate the price and will be stuck paying the nearly $6 million in back rent it owes to Ashkenazy, said Adam Stein-Sapir, a co-managing partner of Pioneer Funding Group, which specializes in analyzing and investing in bankruptcy cases, who is not involved in the case. However, Barneys’ Chapter 11 proceedings give them the option to back out of the lease.

Theoretically Barneys could cancel the lease and try to negotiate a new one with Ashkenazy — either at a cheaper price or taking less space — but Stein-Sapir said it’s “a higher degree of difficulty” and could “run afoul of the bankruptcy process.”

Speculation is heating up on Ashkenazy’s plans should Barney’s vacate, leaving over 250,000 square feet of prime Central Park-adjacent space in its wake. But it’d be hard to find another store like Barneys to jump in.

“If you’re looking for a tenant like Barneys, guess what? There’s not a lot of Barneys out there,” said James Famularo, the president of Meridian Retail Leasing. “Who else would be a candidate for the space?”

Brotschol added that, “one option might be to bring in retail on the ground floor and potentially redevelop the upper floors for other uses.” But even a transition to breaking up the space might be a challenge, according to both Famularo and Abrams.

“If I was hired for this assignment, the only way I can get close to that number [of $30 million] was if I divide the ground floor spaces and section off the upper floors,” Famularo said. “Even then, there’s not a lot of takers.”

The whole situation calls to mind the sale of the former Lord & Taylor flagship building at 424 Fifth Avenue in Midtown, which was purchased by WeWork and Rhône Capital for $850 million earlier this year, as Commercial Observer reported. WeWork plans to occupy the entire 676,000-square-foot property.

Any plans to convert 660 Madison might be gummed up by the segmented ownership of the building, Brotschol said. Ashkenazy owns the retail portion, consisting of the basement and the first through ninth floors, and Midtown Equities owns the upper office condominium portion on the 10th through 23rd floors.