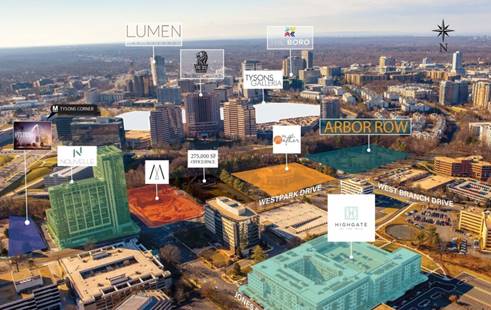 Washington Property Company (WPC) has acquired a 5.2-acre parcel of land to develop an apartment complex at the corner of Westpark and West Branch Drive in Tysons, Va., according to the Bethesda, Md.-based firm.

The site was purchased for $21 million, a source familiar with the deal told Commercial Observer.

Under WPC’s Solaire brand, the development will feature two mid-rise apartment buildings with a combined 700 rental units and 8,000 square feet of street-level retail space, according to a statement from WPC. “We are excited to bring the Solaire lifestyle to the most appealing neighborhood in the new Tysons,” Daryl South, a senior vice president at WPC, said in prepared remarks.

The land is located in the 19-acre Arbor Row neighborhood which stretches along Westpark Drive in close proximity to the Tysons Corner Metro station. The area, which once housed 1970s-era office buildings, is now being redeveloped with new mixed-use properties, according to the statement. Future plans for Arbow Row include more than 3,000 residences and more than 40,000 square feet of retail, South said.

WPC has four Solaire-branded developments located in Silver Spring, Wheaton, and Bethesda, Md., according to the statement. A fifth Solaire site is slated to break ground in Silver Spring by the end of 2019.

The Arbow Row development will be the brand’s first complex in Northern Virginia and features will include quartz countertops, stainless steel appliances and private balconies, per the statement. WPC expects to break ground on the project in the next 12 to 24 months.

John Sheridan of CBRE represented the seller, a global private equity firm whose name was not disclosed in the statement. Sheridan did not respond to Commercial Observer’s request for comment.