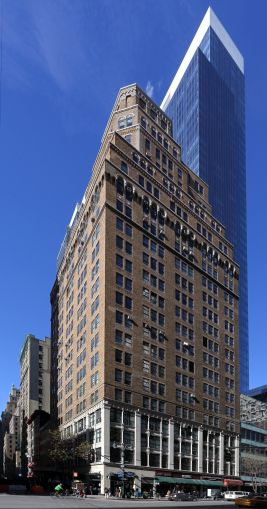 A toy manufacturer, a film production company, a marketing agency and an insurance advisor have all signed leases totaling about 14,000 square feet at 875 Avenue of the Americas in Chelsea, landlord Lee & Associates NYC announced in a press release.

Florentine Films, a production company known for its PBS documentaries, inked a six-year agreement for their 1,596-square-foot lease on the 18th floor, according to the press release. Chief Media, a direct response marketing agency, will remain in its 6,992-square-foot space on the 11th floor for three years.

A division of Lee & Associates owns the 25-story building between West 31st and West 32nd Streets, known as the Greeley Square Building.

Lee & Associates’ Peter Braus and Dennis Someck brokered the leases on behalf of the landlord, and also represented Florentine in its deal. Peter Occhi of Cushman & Wakefield represented Chief Media.

“There has been overwhelming interest in the centrally located property at 875 Sixth Avenue over the past few months, whether that’s from existing tenants who would like to expand within the building, those who are happy with their current space and want to secure it for the coming years, or tenants who are completely new to the building,” Braus said in a prepared statement.

Cambridge Insurance Advisors, which had previously leased a 2,941-square-foot space on the eighth floor of the building, is expanding and relocating their office in a five-year lease. The insurance advisor company will be moving to the 10th floor to occupy a 3,809-square-foot space, per the release. Michael Kaufman of the Kaufman Organization represented the tenant in the deal.

Commonwealth Toy & Novelty will be moving into a 1,481-square-foot office space on the 17th floor, according to the release. Barry Goodman of Newmark Knight Frank brokered the deal on behalf of the tenant.

Both Cambridge Insurance and Commonwealth Toys & Novelty will be moving into their new spaces in September. All four of the deals were signed around the beginning of June, and asking rent for the spaces was around $60 per square foot, according to Braus.

Spokespeople for C&W, Kaufman and Newmark all declined to comment on the leases.

Update: This story has been corrected since publication in regard to the affiliation of the brokers involved in the deals.