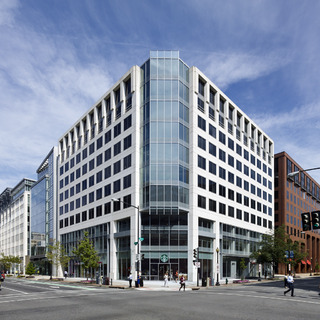 The coworking firm signed an 11-year lease for the space, which will be move-in ready in August.

“With the increased presence of coworking in Washington, D.C., we viewed a lease with Premier as synergistic for the building overall,” Shaun Broome, LaSalle’s senior vice president, told Commercial Observer. “Premier can provide flexible space alternatives to clients and in turn bring more exposure to the building — complementing our prime offerings in the building for larger space options.”

Premier will be renovating the floor to be in line with its new modern design, which includes large offices and professional full-service shared workspaces. The appeal of the 10-story building started with the building’s lobby, which was recently renovated with a sharp, modern look along with an updated electronic directory listing, according to Beth McKenzie Ball, senior general manager for Premier Workspaces’ D.C. locations.

“When you take the elevator to our floor, you are immediately stepping into Premier’s lobby and the space itself provides beautiful open areas and the window offices have great views,” Ball told CO. “We are optimizing the open space to have more affordable private offices and utilizing a lot of natural lighting to create bright hallways, some open ceilings and polished concrete floors.”

The property is located on the corner of 20th and L Streets and is considered part of the Golden Triangle. The neighborhood is in the center of the Financial District and close to Georgetown, and is near four metro stops including DuPont Circle.

“Nearby retail options include an on-site Starbucks, Panera and Crepeaway, which allow our tenants to have all of their needs met without leaving the building,” Broome said.

This is the second D.C. property for Irvine, Calif.-based Premier; the other is the Homer Building at 601 13th Street NW.

“We were always looking to grow in D.C., but the timing proved perfect to add a second location at the right property,” Ball said. “This is a critical area; we want to establish more of an East Coast presence, and we want to expand in the DMV district.”

2001 L Street includes a mix of large nonprofits, law firms and consulting entities. Some of the tenants include Urban Land Institute, The Institute of Electrical and Electronics Engineers, Lerman Senter, Economic Consulting Services, and Zenetex. Current vacancy at the property includes 5,348 square feet on the front corner of the sixth floor and 12,804 square feet on the eighth floor.