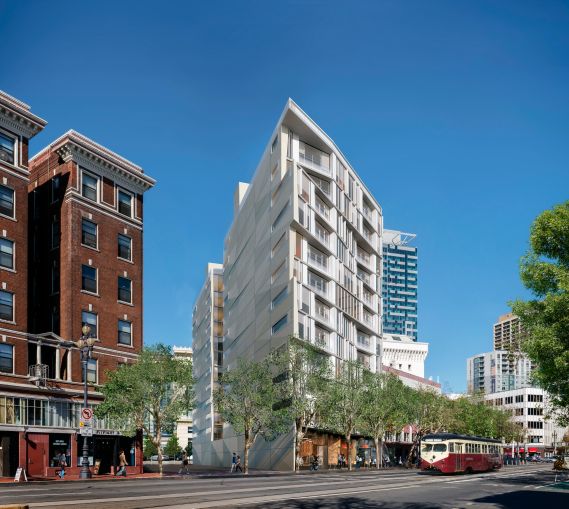 Global investment manager Barings has provided $76.8 million to Z&L Properties for the firm to build a residential condominium in downtown San Francisco, according to information from brokerage JLL, whose newly acquired partner, HFF, arranged the debt.

The five-year, floating-rate loan will go towards raising a 109-unit condo at 1554 Market Street in San Francisco’s downtown, specifically the Hayes Valley neighborhood.

“We had two [projects] we needed to get financed, and Barings had an out-of-the-box way of financing both,” Z&L CFO Robert Buckner told Commercial Observer, highlighting the lender’s $74 million construction loan on Z&L’s 235,300-square-foot residential project, Fulton 555, at 555 Fulton Street in Hayes Valley. “The rates were good, and they just understand the market and the challenges that we have in the Bay Area, finding good tradesmen and general contractors in order to build.”

Buckner said Z&L had been working with HFF, a long-time partner, on both financings and that it took “about four months” to arrange the debt on Fulton 555, but “close to a year” to seal the deal for 1554 Market Street after rising construction costs and the company switching general contractors put the deal behind schedule.

“But Barings stuck with us and we closed it last month,” Buckner said.

Through HFF, the JLL team that arranged the debt included senior director Brandon Roth and senior managing director Charles Halladay, according to information from JLL.

“The San Francisco condo market continues to be strong, with record pricing achieved in the second quarter of 2019,” Roth said in a prepared statement. “Lenders recognize that a severe housing shortage combined with employment growth and IPOs from Uber, Lyft, Pinterest and others will lead to sustained demand from new buyers.”

The transit-oriented property, located a block away from the Van Ness Muni Metro Light Rail station, which is at the corner of an intersection of a major thruway at Van Ness Avenue and Market Street, will feature two 12-story buildings totaling just under 147,000 square feet. The two buildings will be connected by a concrete pedestrian skybridge, and the 109 residences, 13 of which will be below market rate, will be built above a ground-floor lobby.

“The building itself is in a busy and prominent area in San Francisco and was a fairly dilapidated property; it was an attractive nuisance,” Buckner said. “In 2017, we razed it and removed what was there. Many developers saw the price of construction get so high they couldn’t pencil out [a development there]. We’re not going to make a great deal of money in this, but it was important that we start delivering units.”

The property will also include a shared courtyard between the two buildings, just over 5,000 square feet of street-level retail space and a 28-car, below-grade parking garage. Buckner said Z&L is anticipating a 20- to 22-month construction timeline, delivering units in 2021.

Buckner said that because of the location and the foot traffic, “we don’t think we’ll have trouble filling [the retail space].” He said the company will deliver the retail space as a “vanilla shell” but that he imagines it will be utilized as a convenient store marketed to the location.

Global architecture firm Handel Architects is the architect of record for the project, handling its exterior and interior designs.

Z&L bought the development site from San Francisco-based condo builder, TruMark Urban, in 2016, Buckner said. The project first received approvals in June 2015, according to information from the website of the San Francisco Housing Action Coalition.

Representatives for Barings did not immediately respond to an inquiry.

This story was updated to include new and revised information as well as comments from Z&L Properties’ CFO Robert Buckner.