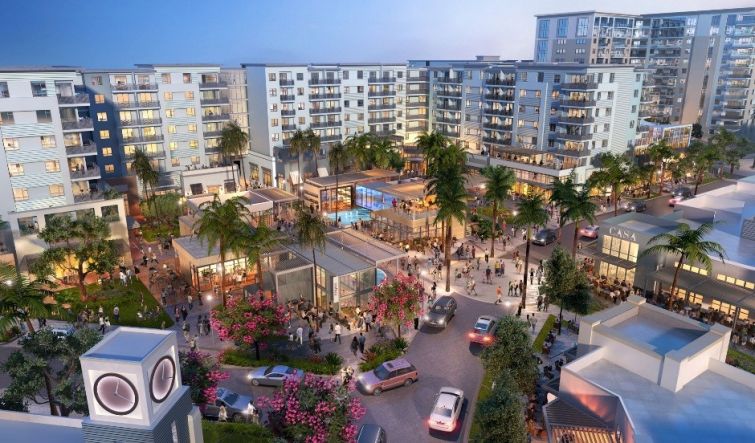 The plan calls for the repositioning of the site—at 321 University Drive—of a former fashion mall into a mixed-use town center that will feature luxury apartments, office and retail space, according to information from Bethesda, Md.-based Walker & Dunlop (W&D). The $350 million project will also include a renovated, 263-key Sheraton hotel, according to a January report from Bisnow.

This new debt will support the next phase of construction, which will cost around $200 million and will take about two years to complete, Pacific Western managing director of national lending, Patrick Crandall, told Commercial Observer. The phase the bank is financing includes the development of 404 apartment units and 134,326 square feet of retail space, according to W&D.

A W&D team led by managing director Eric McGlynn arranged the financing on behalf of Rescore, which specializes in acquiring land and assets to be developed into new apartment communities. “Rescore’s project will create a walkable town center feel that is unique and much needed in the Plantation submarket,” McGlynn said in a prepared statement.

“Rescore is an exceptional sponsor and have been working on this project for some time, so they have an excellent handle on managing through the complexities of multi-phase construction and integrating the new structures into the existing parking garage,” Crandall said, via email. “This will be a transformative project for this area of Plantation.”

Crandall said the bank isn’t anticipating providing more debt on future phases of the development, but that it would “certainly be open to doing so as additional phases become ready to move forward.”

The finished town center, which held an official groundbreaking in January, will feature 700 luxury apartment rentals, 160,000 square feet of office space and 190,000 square feet of retail space. The site’s amenities will include a fitness center, a clubroom and a pool.

Healthcare company Aetna has already leased office space at the development, according to Bisnow’s report.

Chinese investment firm U.S. Capital, led by investor Wei Chen, bought the 650,000-square-foot fashion mall that used to occupy the space for $41.5 million in 2004, according Bisnow’s report, with plans to redevelop it that never materialized. The mall eventually shuttered after tenant departures and damage caused by Hurricane Wilma in 2005, and U.S. Capital filed for bankruptcy in 2012. The mall officially closed in 2007.

The 32-acre site was sold for $37.7 million at auction in 2015, and the mall was subsequently demolished in 2017 to make way for Encore’s planned assemblage.

Rescore could not be reached.