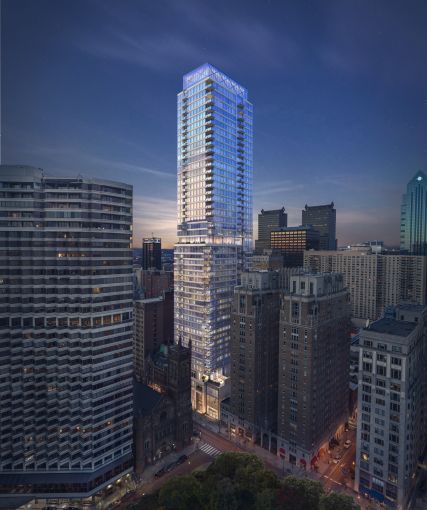 A rendering of The Laurel at 1911 Walnut Street in Philadelphia. Courtesy: Solomon Cordwell Buenz

Named after Pennsylvania’s state flower, the Mountain Laurel, the planned 48-story, 420,928-square-foot mixed-use residential condominium, rental and retail development will be built on the last undeveloped parcel in the coveted area, Rittenhouse Square, just a short walk east of Center City. It will be the tallest residential building in the city, according to SLC. The Nashville-based company broke ground last month, according to its website.

“The Laurel represents a world-class high-rise condominium, multifamily and retail development on the last developable site on the renowned Rittenhouse Square,” Stolly said in a statement. “The premier location and elegant design will result in a truly one-of-a-kind property.”

The property—designed by Chicago-based Solomon Cordwell Buenz and located at 1911 Walnut Street—will include 184 luxury rentals, 60 residential condominium units sized at roughly 143,000 square feet, nearly 44,000 square feet of retail space and a 208-space subterranean parking garage, according to information from SLC.

“Southern Land Company is a highly experienced luxury residential developer and is the ideal firm to tackle this ambitious and iconic development,” Roeschlaub said in prepared remarks.

The Laurel will feature amenities such as valet parking, an indoor lap pool and hot tub, a fitness center with a locker room, a steam room and sauna, a yoga room, a conference room, a dog spa and a terrace that will overlook Rittenhouse Square and includes a bar and catering kitchen, according to information from SLC’s website.

“We have the best location and the most sophisticated offerings of any residential project in Philadelphia—and now we have a name and a brand to match it,” SLC CEO Tim Downey told Philly Voice in February 2018, when the firm announced its plans for the luxury tower. “The Laurel will set the market for luxury living in Center City, and we have spared no expense to ensure every detail is absolutely perfect.”

In February, SLC said it had already sold a quarter of its residences, before even beginning construction on the building’s foundation, according to a report from GlobeSt.com, which also indicated that the property will start delivering units in 2021.

Prices for the property’s residences will start at $2.5 million, according to SLC’s website.

This project comes on the heels of SLC developing, stabilizing and eventually selling another luxury apartment tower called Arrive University City, at 3601 Market Street in the University City neighborhood.

A representative for SLC was not immediately available to provide comment.

This story was updated to include new information from Southern Land Company on the size and scope of the development and its residential units.