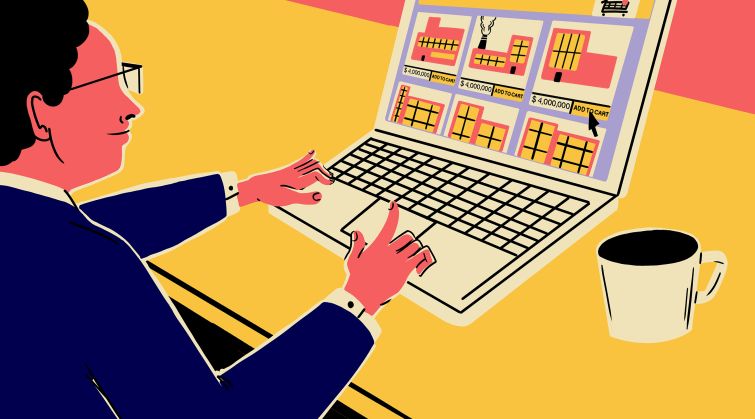 Blackstone, led by Jonathan Gray, has been on a decade-long shopping spree for industrial assets. Illustration: Britt Spencer

When you’re standing atop as large an investment platform as the one the real estate decision-makers at Blackstone have at their command, your options for geographical and asset-class allocations are as broad as they come. To put it another way, there’s a lot of property you can buy if you have $18.7 billion to spend.

So, the company’s decision, first reported by The Wall Street Journal this week, to lay out that sum on a 179-million-square-foot U.S. industrial portfolio that was put up for sale by Singapore’s GLP, has been a shot of vindication for U.S. industrial investors who have championed the asset class for years.

“The people at Blackstone have proven time and again that they know what they’re doing,” said Peter Baccile, the CEO of First Industrial Realty Trust, reacting to the massive investment. (The deal was the largest private real estate transaction in history, as per the Journal.) “It’s never a bad thing when smart people invest a lot of money in the business that you’re in.”

And if one of those “smart people”—namely, Jonathan Gray, Blackstone’s chief operating officer—describes the move as being based on a “really high conviction,” so much the better.

Speaking at a Bloomberg investors’ forum in New York City this week, Gray stuck that label on Blackstone’s belief in the industrial sector’s fundamentals.

“For us, logistics has been our highest-conviction theme for some time. Why? It’s based on the simple premise that goods are increasingly moving from physical retail to online retail,” Gray said.

But to leave it at that would omit an important facet of the Blackstone portfolio’s worth: Of the 1,300 facilities included in the deal, many lie in urban zones where it’s tricky for newcomers to build competing assets. As consumers have grown used to two- and even one-day delivery times, logistics networks that reach into densely populated regions are an important value driver.

“GLP owned a bunch of what we call ‘last-mile’ logistics,” Gray said. “Historically, you could have a warehouse 100 miles from New York City…But now, Amazon wants to be at your door an hour or two later. So [the company] wants to be close to the George Washington Bridge.”

But it’s hardly the only large-scale investor throwing its weight around in the space.

Prologis, a San Francisco-based real estate investment trust, controls almost 2,800 warehouses that comprise 515 million square feet in America, and the company has closed its own major portfolio transactions of late—on both sides of the negotiating table. Last August, it paid $8.5 billion to add the holdings of DCT Industrial Trust, a 71 million-square-foot roster of properties in major U.S. markets. Two months later, it sold off a $1.1 billion set of its own assets to Mapletree Investments, a deal that saw the REIT part with nearly 7 million square feet in the U.S. as well as about 10 million square feet in Europe.

Tom Ollinger, Prologis’ CFO, alluded to Blackstone’s megadeal in describing how his company thinks about valuing gigantic agglomerations of warehouses that it might want to buy or sell.

“There are a lot of portfolios out there, and one was just recently in the news,” Ollinger said, speaking at a REIT conference in Midtown this week. “We look at everything, and [within every portfolio] there are assets we like and assets we don’t like. The challenge is that for assets we don’t like, we have to price them to move.”

Rent levels at potential acquisition sites are also a key concern. One of Prologis’ biggest challenges during the Great Recession, Ollinger said, was that typical rent levels at its properties were too high relative to the prevailing market rate—which made it a challenge to find lucrative new tenants when the economy slowed.

Today, because the demand for industrial space has grown so rampantly, leases that industrial landlords signed in past years are well under market rates, giving warehouse owners a margin of error in case GDP growth flatlines.

“Leases we did yesterday are at market, but the leases we did five years ago are 30 percent below market now,” Ollinger said. “That’s the durability that [our margin] gives us.”

John Murray, the CEO of Industrial Logistics Properties Trust, said that the Blackstone buy was all the more encouraging for his company because ILPT, he believes, has been able to find even better buys.

“I think everyone probably saw that Blackstone did a deal earlier this week, and I’m hearing that the cap rate was in the five [percent range],” Murray said. “That makes us feel good about our recent acquisitions, [which have been at cap rates] slightly over 6 percent.”

But even if Murray thinks he can beat Blackstone on pricing, it’s clear that few can match the New York City-based behemoth on market share. That’s a useful goal in its own right, Gray observed.

“[We] invest in scale, because when you do bigger things, there tends to be less competition,” he said.

Baccile, the First Industrial CEO, agreed, noting that insufficient availability of square-footage is the only reason his company has lost business in recent years.

“We haven’t seen any musical chairs: It’s all growth. When we lose a tenant, typically we’ll lose a larger tenant because we can’t accommodate their needs for growth” Baccile said. “[We’re] 97 percent leased. Demand is very solid.”