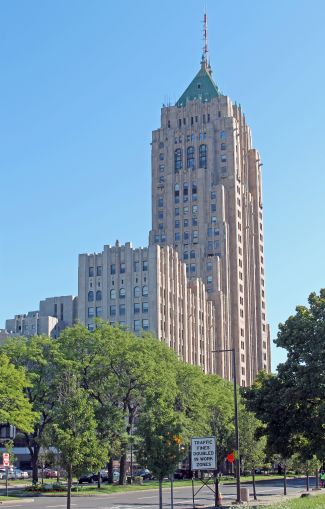 The deal brings sponsors HFZ Capital and The Platform—a private Motor City development firm—money to knock out prior debt on the Art Deco office monolith, a previous senior mortgage that came from Arena Investors, sources with knowledge of the new debt package disclosed.

Vaulted ceilings painted with dazzling tessellated patterns wheel above the building’s public spaces, and ornate wrought-iron railings line walkways that connect the building’s office wings on higher stories. Designed by Albert Kahn, whose work is an architectural staple in the city and around southeastern Michigan, the tower became a national historic landmark three decades ago.

With real estate values in the city hitting a nadir after decades of out-migration, HFZ and The Platform were able to buy the Fisher Building, along with the neighboring Albert Kahn Building, for just $12 million only four years ago. (Another firm that was part of the acquisition group, Redico, was bought out by The Platform in 2016.) Deal sources couldn’t provide the loan-to-value ratio, but even a heavily leveraged arrangement would mean that the asset’s value has soared.

“The markets have improved a lot, generally, since the time they bought it,” said Jeremy Ross, UC Fund’s chief credit officer. “They bought it in a somewhat distressed situation, but they’ve also put substantial capital into the project in the form of renovations.”

The borrowers plan to use a portion of the proceeds from the new UC Funds loan to bankroll improvements to the building’s office space in order to attract new tenants as leases roll over, Ross confirmed.

Those efforts should be pushed along by a tidal shift in the direction of the city’s economy. During the summer of 2009, when the Great Recession hit the city hardest, nearly one in five willing Detroit workers was out of a job. Today, the unemployment rate is just 3.9 percent, only a hair above the nationwide level, according to Department of Labor data.

Representatives for the borrowers’ group did not respond to a request for comment right away.