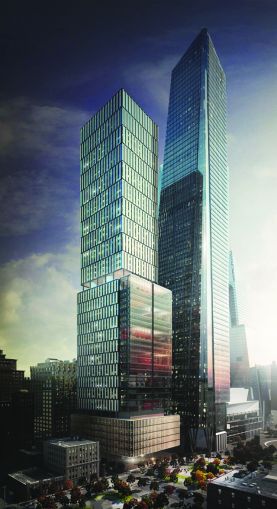 After being linked to several properties around Manhattan recently, Facebook is in talks to lease office space in the under-construction 50 Hudson Yards, Crain’s New York Business reported.

The social media juggernaut is reportedly close to finalizing a deal for 1 million square feet in the 985-foot-tall 50 Hudson Yards, the largest building planned for Related Companies and Oxford Properties Group’s West Side megaproject, according to Crain’s.

“We constantly reevaluate our facilities needs, and we don’t have anything new to share about our plans in New York at this time,” Facebook spokesman Anthony Harrison said in a statement to Commercial Observer.

A spokeswoman for Related did not immediately respond to a request for comment.

In October 2018, Facebook—which also has offices at 770 Broadway in Noho and 225 Park Avenue South in Gramercy Park—was reportedly considering leasing the entire 870,000-square-foot 63 Madison Avenue to grow its New York City presence, according to The Real Deal.

However, The New York Post reported in December 2018 that the 63 Madison Avenue plans went south and Facebook was instead in talks to take space at SL Green Realty Corp.’s One Madison Avenue. That month, Facebook inked a deal for 40,000 square feet at 335 Madison Avenue, as CO previously reported.

Related is currently working on building the 2.9-million-square-foot 50 Hudson Yards, scheduled to be completed in 2022, and has already leased 850,000 square feet to BlackRock.