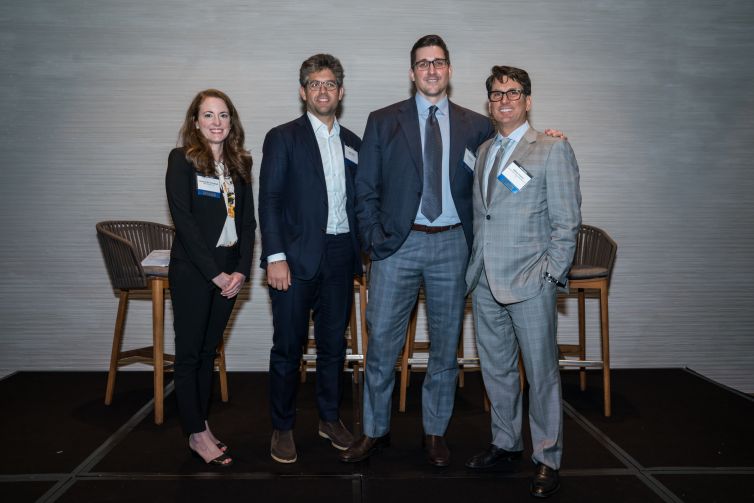 “The road to success is always under construction,” Lily Tomlin once quipped. And the trio of development experts that were quizzed by Ballard Spahr’s Siobhan O’Donnell have seen quite a few bricks in their time.

“Every time the market gets peaky it seems that every borrower is a great borrower and every deal is a great deal,” Chris Allman, a managing director at CIM Group, said, adding that developers should choose their construction lender very carefully. But, “a lot of borrowers aren’t doing that.” And he should know, being both a lender and a borrower (CIM borrows between $5 billion and $7 billion per year).

Casey Klein, a principal of Crescent Heights, is an active borrower who’s busy closing significant debt deals—recent refinances include $734 million in CMBS financing for two of its luxury residential properties in L.A. and San Francisco, namely Ten Thousand and NEMA San Francisco—but said that when it comes to picking a construction lender, the post-close relationship is actually key.

Jeff Fastov, senior managing director at Square Mile Capital Management, concurred, saying that it’s all about “life after you close, and doing the admin stuff as early as possible.” Echoing sentiments from earlier in the conference, Fastov warned against being lured by attractive pricing offered by inexperienced lenders.

“It’s in the nooks and crannies—if a deal isn’t put together well, all the basis points in the world won’t make up for a lender who can’t keep up with the [draw down] schedule,” he said.

Indeed, these tricks ain’t for kids, and borrowers should be wary of those who aren’t necessarily fully versed in the nuances of the complex world construction, Allman said.

“Be careful what you wish for. There are a lot of lenders doing these deals who don’t understand how construction works,” he said. “And when things go wrong and they’re faced with the proposition of assuming that project, they freak out.”

Strengthening its foothold in the debt space, CIM only lends where it builds, Allman said, which gives it a major leg-up in the understanding of those markets. Additionally, having CIM in the capital stack often sweetens the deal for potential borrowers, he said (and Klein agreed).

As for those lenders dabbling in value-add deals that include quasi-construction? Once again, proceed with caution, borrowers.

“Those deals can be even more difficult than ground-up construction,” Allman said, using the example of an 80-year-old building that needs significant rehab as something that needs expert attention.

It’s not just the lenders who are under scrutiny. When asked what makes a good borrower, the panelists also had plenty of boxes to check.

“They should have a strong balance sheet and reputation, a good track record and haven’t given any assets back,” Allman opined. Construction lending is also a relationship business and so Fastov asks himself, “can we add value to their business, and can we do 10 more deals with them?”

But, there is no doubt that “it’s a great time to be a borrower,” Klein said, adding that even when doing big, heavy-lift loans, capital continues to flow to top-tier sponsors with well-located assets.

Indeed, well-located properties decrease leasing risk, which is a key consideration in development lending. Or, more simply put, “We like it when a building fills quickly,” Fastov said.

It also comes down to supply and demand. And one interesting market from a case-study perspective is San Francisco.

“The demand there is of the chart, but because of that values are pushed way above trend,” Fastov said.

When the conversation swung around to co-living and co-working properties, panelists agreed that the property use reflects a broader theme: increased importance being placed on a sense of community at properties.

“Mixed-use is a great blend for us,” Fastov said. As an example, Square Mile provided a $30 million preferred equity investment for the construction of Property Markets Group’s X Miami Project—a 462-unit rental tower in Downtown Miami that includes co-working space and The Guild hotel.

As a final word, if things do start to go sideways, speak up, panelists advised the audience.

“It’s got to be an immediate conversation [with your lender],” Allman said. Fastov concurred, saying that this sometimes-difficult chat has to come early so there can be a rebalancing.

“Be forthright, and provide real-time info,” Klein said. “In particular, what are you doing to rectify your situation?”

Can’t say fairer than that.