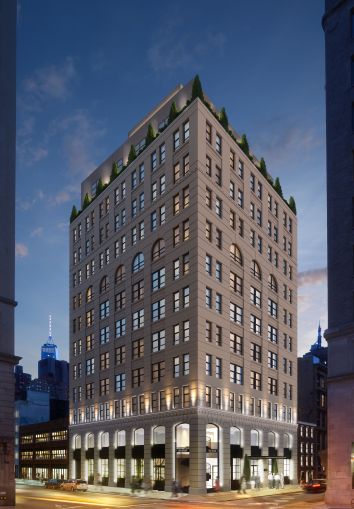 Naked, which features a rotating roster of brands, signed a three-year lease for 1,100 square feet at the 207-key hotel on the corner of Lafayette Street.

This will be Naked’s second location in New York City, after their flagship at 224 Mulberry Street, also in Soho. The company is among a trend of co-retail, which combines brands into one location.

Naked, which has worked with brands like Nordstrom and Brooklinen, changes out the brands it displays every 30 to 90 days, each time completely redesigning the store.

The company started three years ago as a direct-to-consumer brand called Upton Leather, but morphed over the years into its current model, said Justin Kerzner, Naked’s president.

“Our biggest goal is brand awareness and most importantly revenue generation for our brands,” he said.

While foot traffic is Naked’s main source of business, the quality of traffic is important, Kerzner said.

“We’re not going to be next to Footlocker,” Kerzner said. “We would be next to Gucci or Warby Parker.”

Their new location will have plenty such neighbors. RFR renovated the hotel at 11 Howard, which was formerly a Holiday Inn, and opened it under the new branding in 2016. Shortly before opening, RFR sold the building to German firm Commerz Real, then leased it back for ten years with an option to buy it back.

Naked plans to open the new location in June.