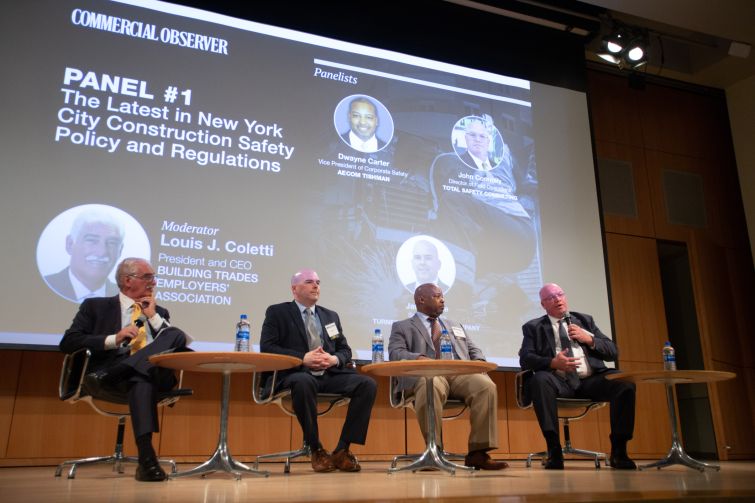 Local Law 196 mandates training for workers and supervisors and is set to take full effect in 2020.

“It can only serve good,” said James Kane, the safety director for Turner Construction. “Putting legislation in place where you have to be trained” will ensure that “everybody that steps inside the site remains safe,” the Navy veteran and former New York City firefighter averred.

Local Law 204, on the other hand, mandates on-site safety orientations to make sure workers are alerted to any job-specific hazards. That measure, too, should make a difference, according to John Connolly, the director of field operations for Total Safety Consulting.

“The battle is won before it is ever fought,” Connolly remarked. “Prevention is important. You should see a reduction in incidents.”

But paring down gruesome accident statistics is also a matter of carefully investigating each mishap to make sure that problems are corrected, Kane added.

“It’s easy to say that, if a guy got his hand cut, it was because he wasn’t wearing gloves,” the Turner executive said. “But what did he cut his hand on? Why was that material being stored on site?” In many cases, more careful planning likely could have removed the danger beforehand, he argued.

“It all starts with pre-planning,” Carter said. “You have to try to plan as much as humanly possible upfront. I’d rather correct the issue on paper.”

“It’s very difficult to change culture in the city. You’re talking about a five- to 10-year journey,” Carter said.

Panelists in a second discussion, moderated by Carl Oliveri, a partner at accounting firm Grassi & Co., echoed the sentiment that a safety-first attitude can be difficult to incubate.

“One of the biggest challenges is getting the experienced worker to make that change,” said George Grauer, the top safety official at EW Howell. “It’s a constant problem: getting them to understand the importance of communicating about lessons learned.”

Marianne Santarelli, the head of safety for Gilbane, said that her company was increasingly turning to technology to help tackle the issue, including giving workers tracking devices that ensure they can quickly be found if they get injured on the job.

Tech like that doesn’t come cheap: Clearly, significant financial outlays can be part of the safety slog. But the panel executives uniformly rejected the notion of directly incentivizing workers with financial rewards. It was a bad idea, they agreed, to “put a price” on safety.

“It’s paramount not to associate monetary value with safety,” Philip Zazzera, a vice president at Pizzarotti, argued. “By just giving some positive praise, that goes a long way.”

Meanwhile, Louis Cendagorta, a Fire Department official responsible for safety inspections of construction sites, congratulated the event’s big-name firms for a better safety record, by and large, than their smaller-time competitors.

“When my inspectors get assigned to a 75-floor building, they high-five each other. They know they’re going to a reputable company,” Cendagorta said. On the other hand, he opined, crews sent to review work on small apartment buildings and the like know they might be in for a long day of issuing violations.