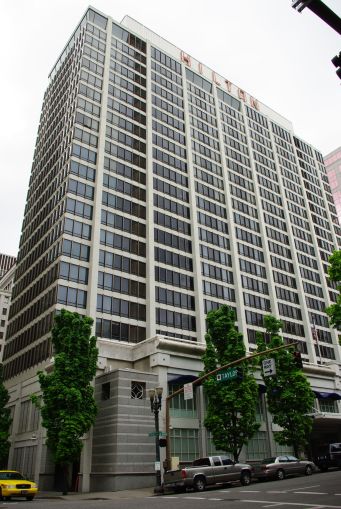 Brookfield Asset Management has landed a $240 million CMBS refinancing from Morgan Stanley on a pair of hotels it owns in Portland, Ore., according to rating agency documents.

The five-year deal (which includes a two-year original term with three one-year extension options) locks in debt for the Hilton Portland Downtown and The Duniway Portland, two adjacent lodgings that Brookfield acquired four years ago. The floating-rate loan, part of a single-asset securitization, will earn interest of LIBOR plus 3.05 percent, according to Morningstar Credit Ratings, which analyzed the transaction.

Combined, the slightly larger Hilton and the Duniway, which was recently renovated, comprise 782 rooms and 63,000 square feet of meeting space. (The Hilton has its own building, while the Duniway occupies the upper 10 stories in a 20-story tower.) The hotels stand cater-corner across the intersection of Southwest Taylor Street and Southwest Sixth Avenue, and when Brookfield acquired them in 2015, they’d been operated as a single Hilton hotel. But Brookfield shut down one of the operations, at 545 Southwest Taylor Street, for an extensive renovation in 2017, spending $63,000 per room to rebrand the lodging as the Duniway, a luxury-minded hotel. The Hilton Portland Downtown, at 921 Southwest Sixth Avenue, got a less thorough refresh, with Brookfield spending $35,000 per room.

Each hotel has a fitness center and its own restaurant, and the Duniway also has a pool and an outdoor patio. Guests at either hotel can use all of the amenities at both properties.

Tourism in Portland has grown every year since 2009, when 12.9 million visitors came to the northwestern Oregon metropolis; in 2018, 19.9 million guests arrived. Hotel supply has ballooned to keep pace, with as many as 20 lodgings either recently opened or under development, representing more than 4,000 new rooms in the city. But given that major corporations including Under Armour, Adidas, Google and Amazon have all committed to expand their presence in the city, Morningstar analysts were sanguine about the increased hospitality competition.

“Most of the new product is at lower price points, or to service a different set of demand in the city,” the analytical team, led by Kyle Stein, noted.

Guests pay an average of $195 per night for rooms at the two hotels, according to Morgan Stanley, which appraised the combined value of the properties at $340.6 million. The Duniway earned a net cash flow of $7 million last year, while the Hilton Downtown Portland raked in $12.4 million.

A spokesman for Brookfield confirmed the transaction but declined to comment further. A Morgan Stanley spokesman did not immediately respond to an inquiry.