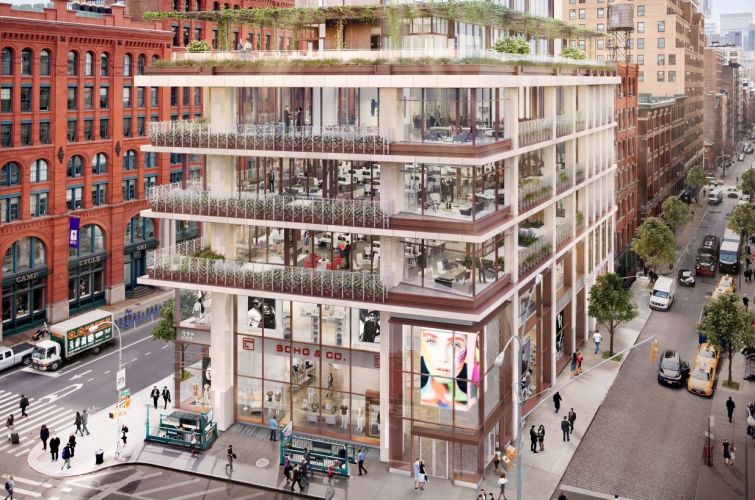 The Nightingale Group and WCP Investments have closed on their purchase of 300 Lafayette Street in Soho, Commercial Observer has learned. The joint venture sealed its acquisition of the leasehold interest in the 82,000-square-foot property with a $143 million loan from TPG Real Estate Finance Trust.

The deal closed today. The exact purchase price couldn’t be ascertained, but sources close to the transaction said it was roughly $130 million and that some of the new loan’s proceeds will be used to bring the building to full occupancy.

Nightingale and WCP’s connection to the asset stems back to 2017. That year, the duo agreed to buy 100 percent of the leasehold interest in the property from developers Related Companies and LargaVista Real Estate, with the formal ownership transfer occurring once the temporary certificate of occupancy was received.

The seven-level structure, which spans the block between Lafayette Street and Crosby Street just south of East Houston Street, topped out earlier this year.

Related, for its part, financed the building’s construction with help from an $88 million Deutsche Bank debt package it got from the German bank in 2016. The building “has spectacular views and over 10,000 square feet of outdoor-terrace and green space, making it one of the…premier developments to rise on Houston [Street] and in the Soho market in over a century,” Stolly said in a statement.

“Nightingale and WCP have a strong track record of success together, with joint interests totaling over 4 million square feet,” Roeschlaub added in prepared remarks. “The partnership is ideally suited to drive long-term, stable growth at the property.”

The Cookfox Architects-designed 300 Lafayette includes outdoor terraces on each of the office floors which rise above 8,500 square feet of street-level retail space. March Associates was responsible for construction.

Earlier this month, Nightingale snapped up the Coca-Coca Building for $907 million with WCP affiliate Wafra Group, as first reported by CO. And it’s not the first time that TPG and Nightingale have transacted; the lender provided a $190 million loan for the landlord’s office asset at 1500 Spring Garden in Philadelphia last June.

A spokeswoman for Nightingale declined to comment, as did representatives for TPG. WCP could not be reached before publication.